Everything about my trip to Illinois to judge the Show for the Cure was memorable--the travel difficulties, the competition, even the raffle.  There were two full tables of raffle prizes which included unpainted resins, OF models, gift cards and even a little bit of tack. 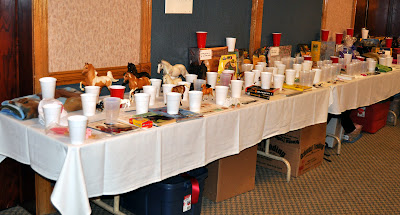 Raffle tickets could be purchased two ways--with cash or with ribbons.  In addition to judging the Resin division, my friend Tiffany was also showing in the Custom Halter classes.  Her horses are outstanding so it's not surprisinly that she ended up with a lot of ribbons.  Most of those were immediately converted into raffle tickets, a ridiculous number of which went into the cup next to a pink nylon halter.
Now don't get me wrong--there was absolutely nothing wrong with that halter.  But still.  It was hardly the most exciting prize up there.
The raffle was held near the end of the day.  Despite having so many tickets in the cup, Tiffany did not win the halter.  Instead it went to Karen B's son Paul.  He sent his mother to retrieve his prize.  Perhaps he was too frightened to walk past Tiffany's table? 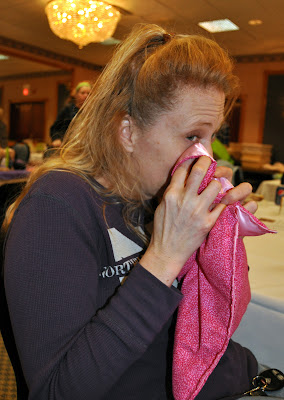 Partly because I am nice and partly because I really want a custom Weather Girl, I told Tiff that I would make her the best model sized pink nylon halter ever.  That turned out to be harder than I'd expected.  After all, there's only so much you can do to improve on a basic nylon halter.    Here's what I came up with.  Note the two buckle crown, two tone overlay and doubled and stitched throatlatch. 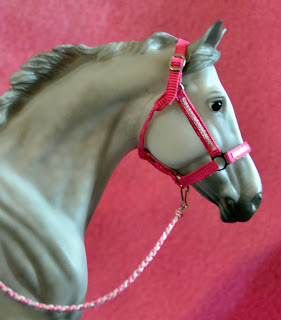 And just in case that one isn't the best ever, here's another pink halter for Tiffany.  This one is bigger and is equal parts leather and ribbon. 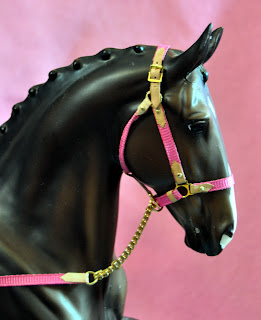 So what do you think, Tiffany?  Can I have my Weather Girl now?  Pretty please?
Posted by Braymere at 1:30 PM