Hmmm...  It just occurred to me that perhaps I would be more excited about showing performance if I had a Native American costume for Tuscalero.  Do you think I could whip one up in three days?

I really didn't expect anyone to take me seriously, but my friend and fellow tackmaker, Shannon Granger immediately sent me an encouraging email.    It read:


Let me know if you need some documentation! I have tons. You could make a simple jaw bridle and pad saddle out of chamois. Feathers are easy, just paint white craft feathers like eagle feathers then cut down to size. You got time!

And I thought, why not?  After all, I have this wonderful Paula O'Keefe doll that I never use.  Why not give it a shot? 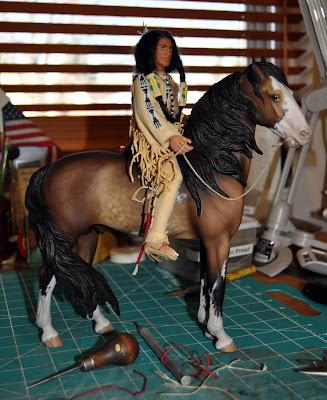 Somehow I managed to forget this one fact--I'm not good at "simple."  The first problem was the chamois.  It was much too bulky for my taste so I spent half a day skiving it.  Then, I had design issues.  I made the saddle but decided belatedly that it was much too plain.  I didn't want to skive anymore chamois so I ended up taking it apart so I could reuse the skived chamois. That took forever...
At the end of the day, this was all I had to show for my efforts. 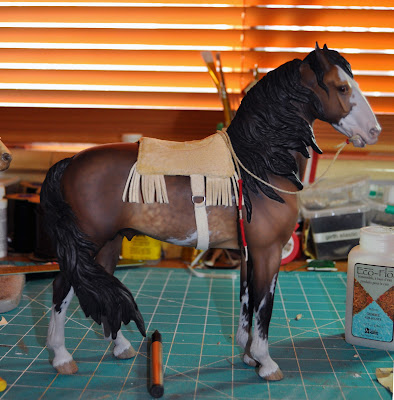 Pad saddles usually have beaded decorations in the corners.  Within the model horse hobby, there are two different ways to duplicate this effect.  Some costume makers go with teeny tiny beads, others use paint.  Both methods have their pros and cons.  Strictly speaking, even the smallest beads aren't really in scale.  However, paint always looks like paint.  Personally I don't have a strong preference.  Since my dolls has beads, I opted to take that route.
The kids didn't have school today and James was in my studio when I got out the loom.  He was very interested in the process and immediately asked if he could help.  I showed him what to do and turned him loose. 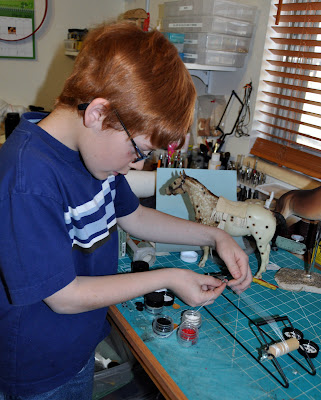 Having a helper in my studio was a dream come true!  And look--he did a great job! 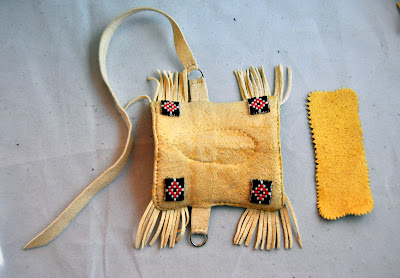 So, here's how the three day Native American costume looks as the end of day two.  Not too shabby if I do say so myself! 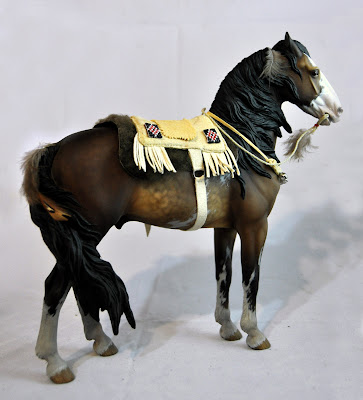 I've heard that costume maker extraordinaire, Lu Heater, is going to be at the show on Saturday.  That means there is essentially no chance that anyone else will win a NAN card in the Native American costume class.  I'm ok with that.  It turns out that this project is more about the process rather than the product.  I've enjoyed having Shannon mentor me via email and I loved watching James string beads.  Tackmaking is usually a solitary endeavor so it's truly a pleasure when something becomes a group project!
Posted by Braymere at 4:57 PM