One of my best riding friends, Kristina, owns a beautiful half warmblood, half Quarter Horse gelding named Kahlua. 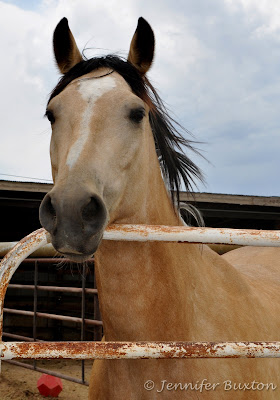 Despite being blessed with a really great human mama, Kahlua's had a difficult life. He seriously injured one of his hind legs as a youngster, and for a long time it looked as if he would never be sound enough to ride. Kristina never gave up on him, and earlier this year, he was healthy enough for Erica to start him under saddle. Everything was going well, and then Erica died.

Kenlyn's other trainer, Sarah, generously offered to take over Erica's commitments, and Kahlua continued to make good progress. There was even one day, some six weeks ago, when Kristina, Valerie and I went out trail riding together. We were only going to go around the golf course, but Kahlua was so good we made it all the way to the Coal Creek Arena. It was a wonderful day!

A few weeks ago, Kristina was dismounting and Kahlua spooked. It wasn't a big spook, but Kristina hit the ground hard, completely tearing up her knee.

Her surgery was three days before mine.

Naturally, we've spent a lot of time commiserating with one another over Facebook. We've talked about pain and drugs and horses and how much we miss our horses and then one thing led to another and we decided that we couldn't wait any longer. We had to go see our horses! 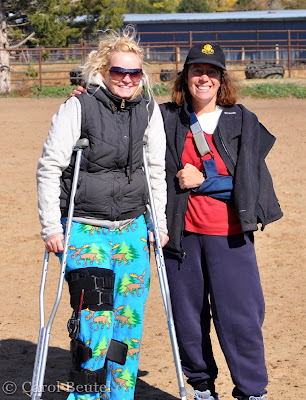 I can't drive yet, so Kristina did the honors. She dropped me off right next to Rev's pen. 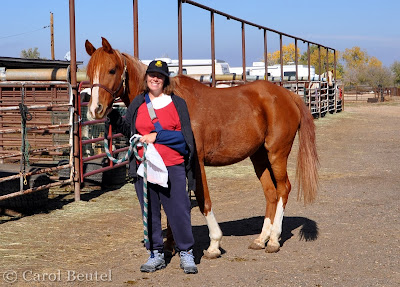 I think he was happy to see me! 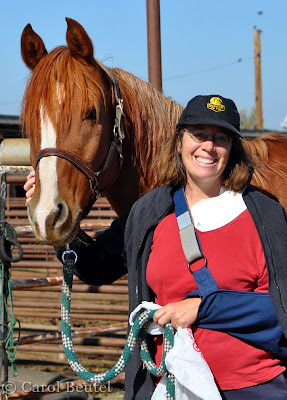 With help from Carol and some other friends, I was able to feed and brush Rev and turn him out in the round pen for a little roll. Remember when I said that horses look funny when they roll? Now all I can think of is how much it hurts when one of them  rolls on me--OUCH! 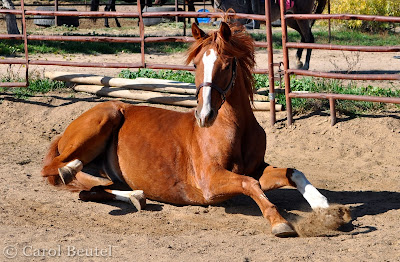 Rev and I hung out a little longer, and then someone--I think Carol--put him away for me. 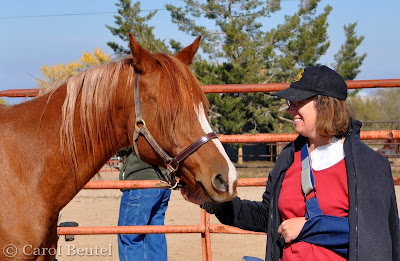 I re-joined Kristina in the center of the ring, and we watched Sarah ride Kahlua. 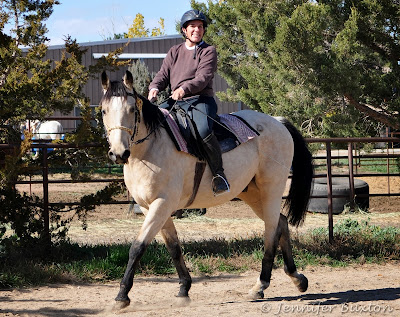 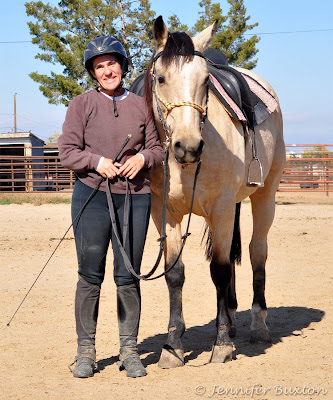 After Sarah was done riding him, she brought him to us so we could love on him a little. Then, he too, was taken away. 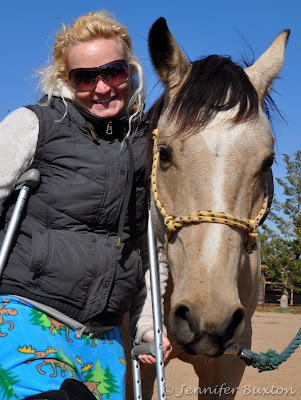 We probably should have gone home then, but it was so nice sitting in the ring, talking to people and watching everyone ride. This is Kelly's wonderful horse, Gunner... 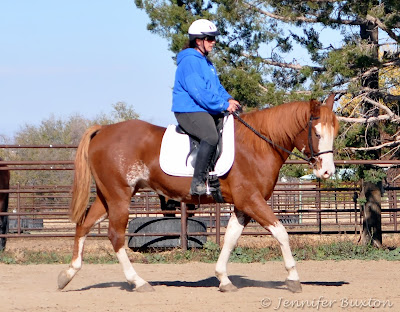 and this is Claire and her pony Doodlebug. 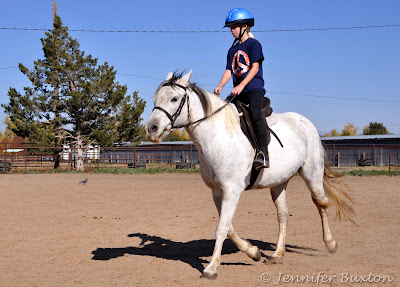 Doodle was Erica's pony, and after her death, Erica's parents gave her to Claire. It was a perfect decision. Claire and Doodle suit each other perfectly, and I love to watch them together even though it still makes me a little sad. 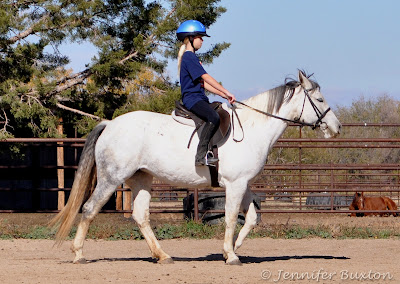 I wish I could have stayed all day, but eventually both Kristina and I succumbed to our post surgery weakness. We headed home, tired and sore but so very happy. Truly, there's no better therapy than a couple hours spent at the stable!
Posted by Braymere at 4:37 PM 5 comments:

One of my favorite long running threads on Model Horse Blab is "Let's see your best model horse photos!"  Over the course of the last year, some absolutely spectacular photos have been published to that thread.  Today's post features a few of my very favorites.  Enjoy!

It's been fifteen years since I attended my first live show.  I remember the newness and the excitement of that experience, but only vaguely.  Sara Kucharski of PawPrints Saddlery is a lot younger than I am, and her memories are much clearer.  Today's guest post is geared to all the young--and not so young--new showers preparing for their first live show.  There's lots of good advice here, even for an "old pro" like me.  Thanks, Sara!

Only a year ago my fiancé and I were preparing for our first live show. Being newbies we had absolutely NO idea what we were doing or how to do it. So let this be an education for all you newbies out there! 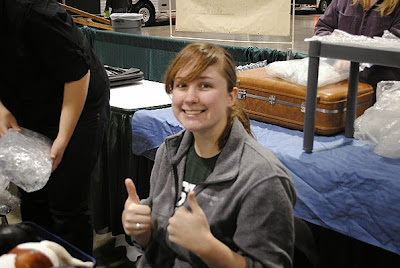 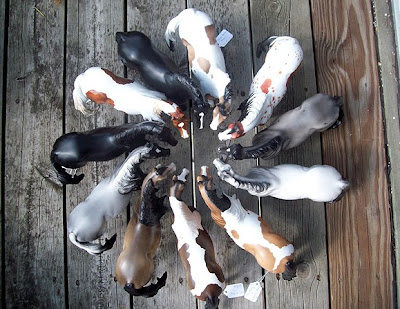 Next give them names. This can be song titles, inside jokes, or just names you like.

After that you need to figure out a breed for each horse. This can sometimes be the hardest part because it requires knowledge of breeds. The internet can be a great source to read about different breeds. Books are also another great way to learn about breeds.  If the breed you choose is not well known it is best to have a printed page that describes it. 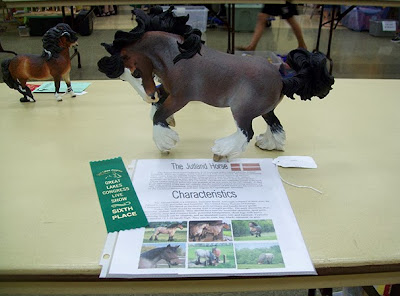 After you have assigned your breed it helps to have a page about the horse in a binder. The binder is the most valuable thing that I take to a show (besides the horses of course!). I use the binder to keep collectability pages and any ribbons that the horse may win. 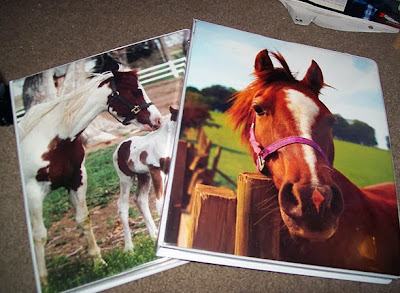 Collectability information can be found on either http://www.identifyyourbreyer.com/ for Breyers or http://www.stonehorseref.com/Home.aspx for Peter Stones 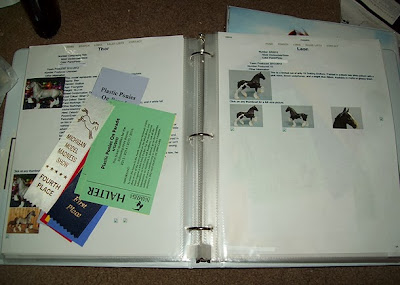 Tagging your horses is also very important. Tagging procedures vary from region to region.  I live in Region 8 and use tags which can be found at Hobby Lobby. One side has the breed and gender and on the other side the horse’s name and your initials.

The first thing I do before a live show is check the class list. Most shows these days have websites where the class list is posted. I print these out and use them as a checklist throughout the day. 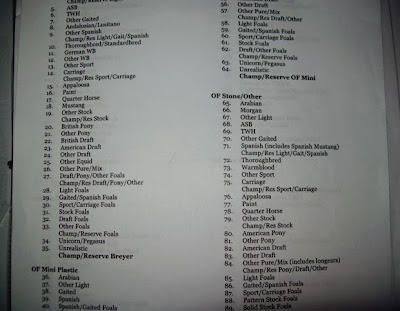 I will go through my binder and fill out the list with the horses I plan on taking. 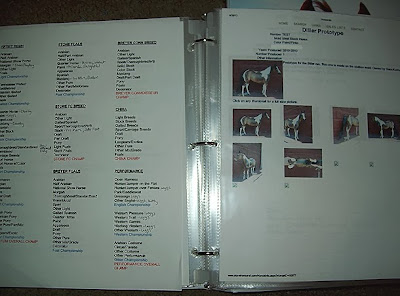 Next I go down the list again and pack each horse in the pony pouches I have made. 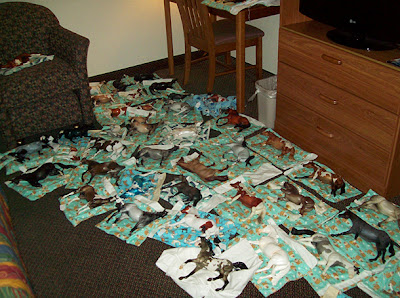 Usually I put resins in one tub and plastics in another. 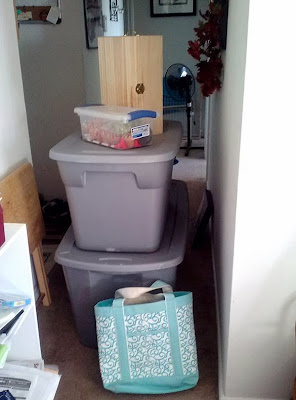 I suggest getting a good night’s sleep before the show and printing off directions on how to get there. Sometimes relying on just your phone’s battery life is a gamble! In the early morning (most shows start at 8am!) we pack the car. If you have horse holders make sure to pack those. One horse knocking into another can be heard around the hall and can damage horses. 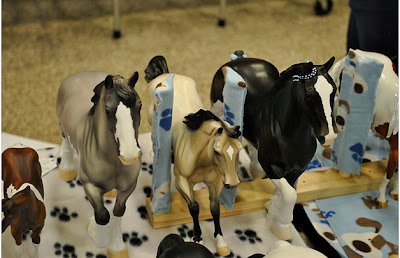 When you get to the show hall find your table. Most people like to lay down a cloth of some sort to protect their horses and identify their tables. I use paw prints because of my studio name, PawPrints Saddlery. 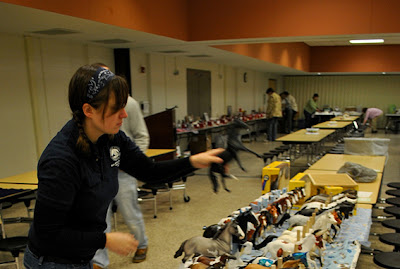 The show holder will announce when the show begins and the judges will let you know when to load and unload your horses. Jake and I usually work out a system so it flows and no one misses a class. When you place your horse on the table make sure the tag has the breed/gender facing up. Don’t forget your collectability page! 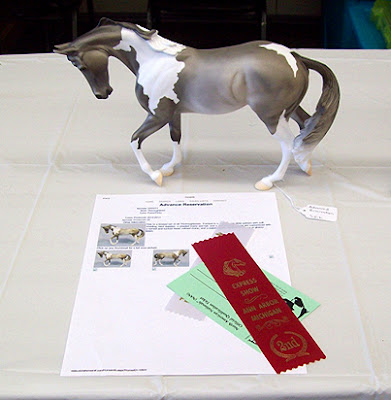 If you horse earns a blue (1st place) or red (2nd place) ribbon you will need to keep them handy for breed section call backs. This gives the horse a chance to win more! 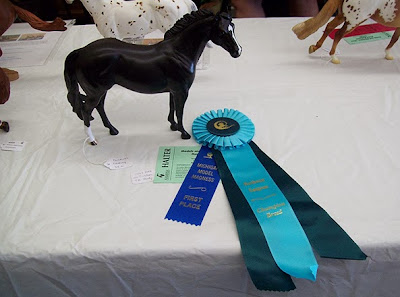 Now if that happens they go up again for an even bigger ribbon! 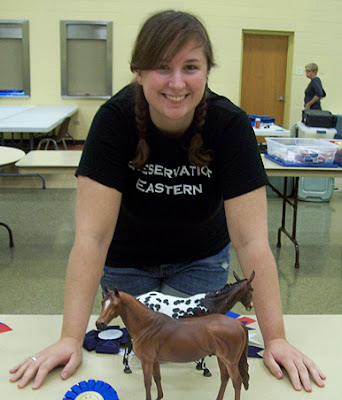 Now the key to having a good show is just to have fun. FUN is the key word here! You may not win a lot during the day but you will meet some of the nicest people. If you have questions many of them will be happy to help and answer them.

Thanks for all the good advice, Sara.  I know that newbies everywhere will really appreciate this post!
Posted by Braymere at 10:01 AM 4 comments: