Apparently, I am easily distracted.
I had two goals for today.  The first was to pack all my halter horses for tomorrow's Blue Skies Live Show.  Sounds easy, right?
Well, it would have been if I had just packed the horses.  I didn't do that, however.  Instead, I spent a few moments visiting with each one, and it was during this time that I realized poor old WarLord needed some work.
WarLord is a Kathi Bogucki Warchant resin painted by an airbrush artist who is no longer involved in the hobby.  I received him as part of a tack trade sometime around 2004.  He was not just one of my first resins and my first really "big dollar" resin.  For years he's been a mainstay of my showstring.
Unfortunately, time has not been kind to WarLord.  His paintwork was looking very thin in places, his white areas had a few marks and that bright green base has always been ugly. 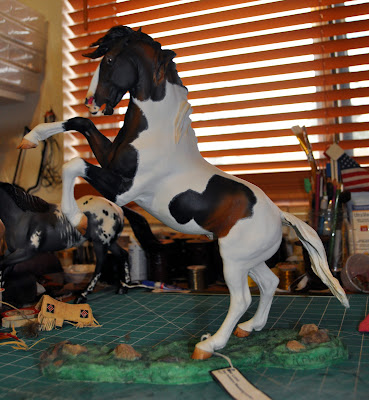 I thought briefly about leaving him at home, but decided instead to give him a "quick" face lift.  My goal wasn't to change him but to bring him back to his former glory.  I brushed pastel dust over the worn parts of his coat, touched up his whites and repainted his base.  He'll need more work before I'll really consider him finished, but for this will do for now. 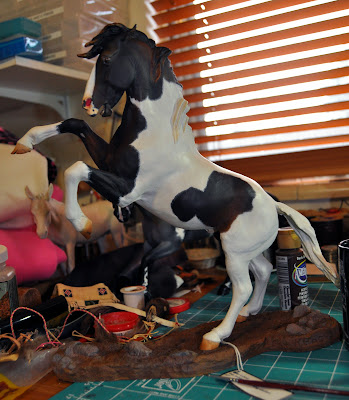 It's now nearly 4:30 pm the night before the show and I'm just beginning to think about the day's second goal.  That is, I need to prepare my performance entries.  Nothing like waiting until the last minute, right?
Posted by Braymere at 4:29 PM