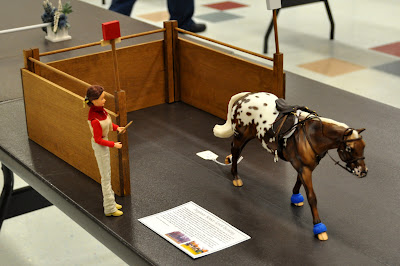 I looked at the handful of performance showers in the room and begged someone, anyone to put another horse on the table.  This is the result of that request. 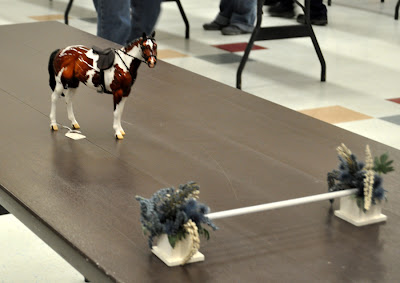 Not surprisingly, the Jumper class was virtually identical to the Cross Country class. 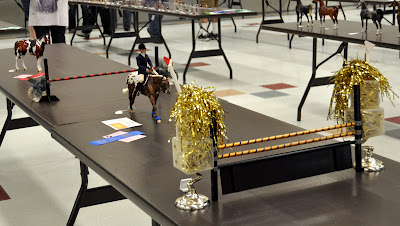 In both cases, Teresa's iApp was the clear winner. 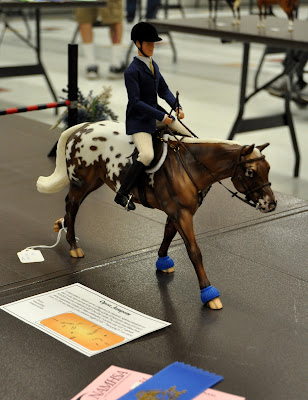 Beggars can't be choosers so I'm not going to pick on Sheila's ISH.  She earned her two NAN cards simply by showing up and that's fine with me.  As an aside, I love that this model's name is Stop N Stare because that's what she did in these two classes.  She stood there and stared at the jumps! Sadly, she didn't get a chance to stare at a hunter jump, so iApp won that class uncontested. 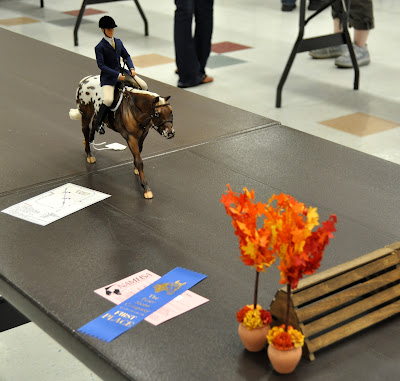 Pleasure was next, and hallelujah!  There were four entries on the table.

The top two entries were very close, but in the end I gave the blue ribbon to Karen Gerhardt's Roundabout resin, Dorney Park. 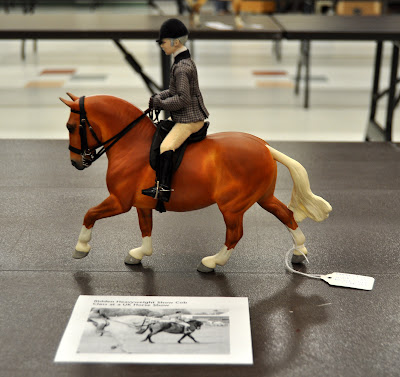 This model was shown as a British heavyweight cob.  His tack was perfectly appropriate for that event, which is not surprising since it was made by British tackmaker, Lauren Islip. 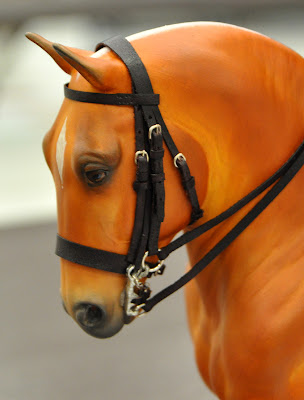 His doll was dressed by Joan Yount, and I have to say, this doll was the main factor in his victory. 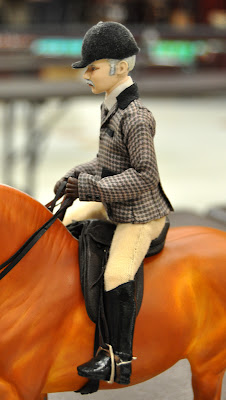 I'm not sure if it's apparent from the photos, but no other entry captured the relationship between horse and rider as well as this one.  You really got a sense that they were working together as a team. 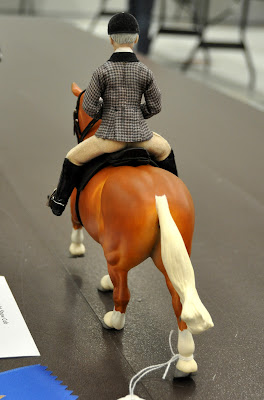 Second place went to iApp.  This is a nice stock type hunter horse with beautiful, well fitting tack and a nice doll.  I'd like to see the bight of the reins hanging down rather than standing up, and if I was being very picky I'd point out that most stock horse showers prefer to use a number pocket pad.  Even without those changes, however, this entry is fine. 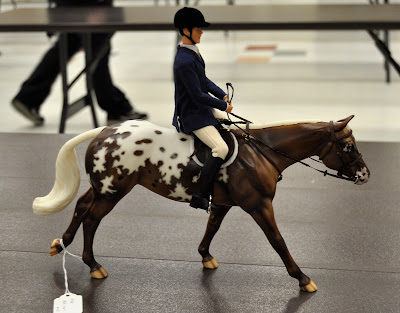 Sheila's Cerridwen resin, Rhiannon was third.  This is a cute pony, with a casual schooling show type turnout.  She has the same rein issue as iApp but her doll isn't sitting as well.  Additionally, it's hard for standing horses to compete in a class where one of the main judging criteria is gait quality. 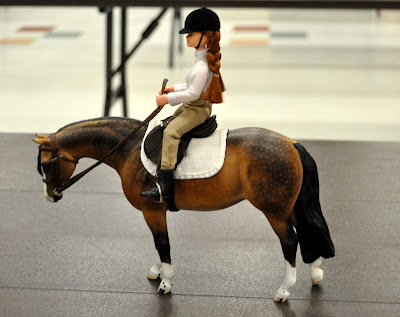 Poor Stop N Stare!  She's such a pretty model, but once again she finished at the bottom of her class.  The ISH is a hard model to show in performance.  Its raised and turned head detracts from the appearance of focus and obedience. 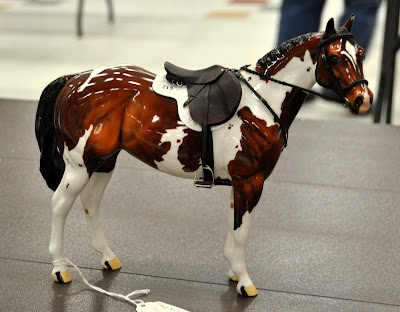 Onto English Trail!  iApp was the winner here with a basic but nice pole entry. 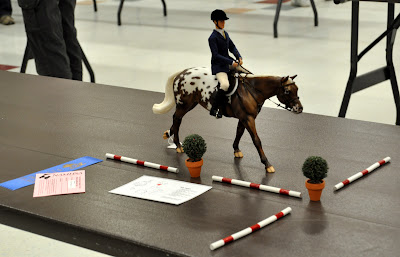 Dorney Park was right behind with this natural trail set-up... 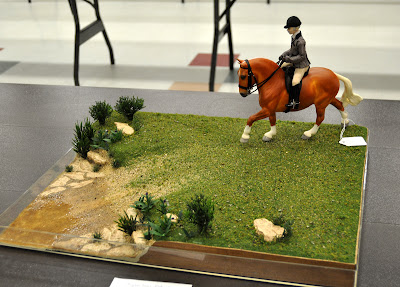 that included a wonderful diorama by Kim Haymond. 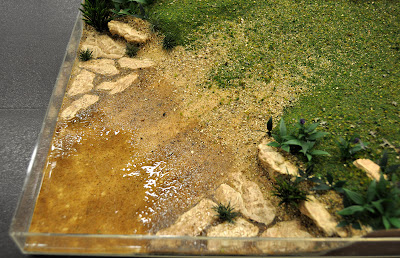 Rhiannon was a close third.  Actually, there wasn't a lot separating the entries in this class.  Both the arena trail horses would have benefited from small changes to both the horse and rider positions.  The natural trail entry was very nice, although I don't know a lot of people who go out riding in their show clothes.  On another day, I might have placed these three differently. 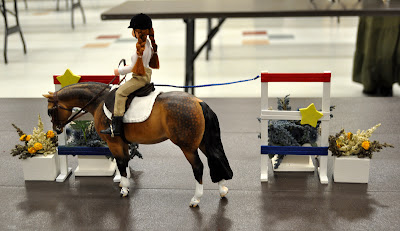 Other English was next.  Karen's Dorney Park won this one rather handily with a foxhunting entry. 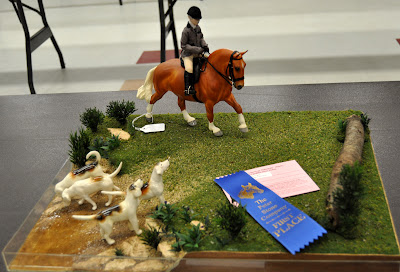 iApp was second with a basic pole bending set-up. 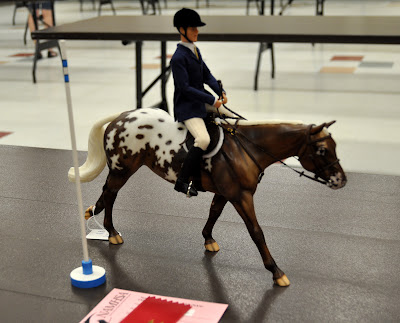 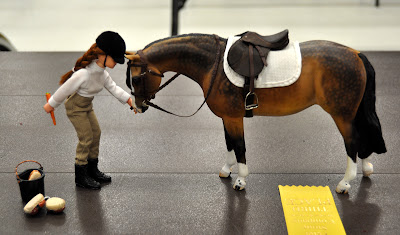 I love, love, love this set-up but it really doesn't work as a "performance" entry.  Next time this one needs to go in the scene class! 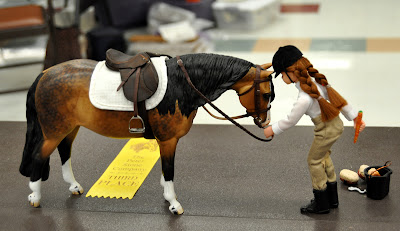 Dressage was another one horse class. 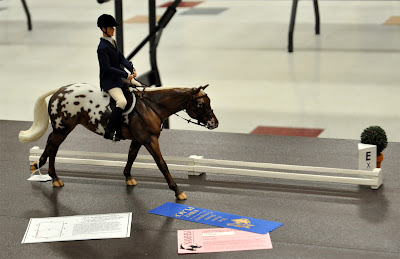 Between them, iApp and Dorney Park had claimed all the blue and half the red ribbons awarded in the English Performance division.   iApp got the nod in the championship showdown based upon her greater versatility. 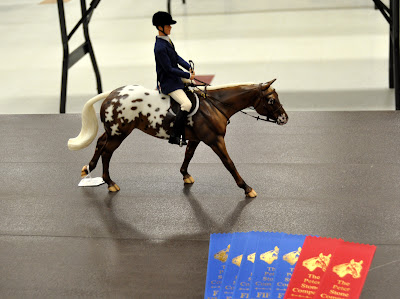 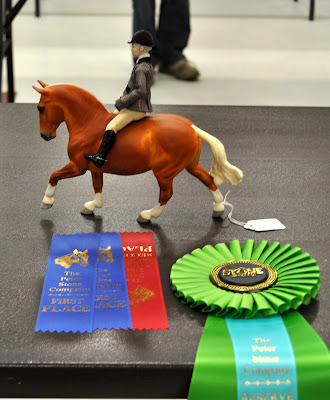 Phew!  Long post.  I promise I'll break the Western division report into smaller chunks.
Posted by Braymere at 11:43 AM