I was speaking from experience when I said that feeding a large number of horses is a big production.  Back in 1989, I spent a summer working as a wrangler at the Don K Ranch in the mountains outside of Pueblo, Colorado.  During the summer months, the Don K maintained a herd of seventy horses that lived on a large dry lot pasture.  That's a lot of hungry mouths! 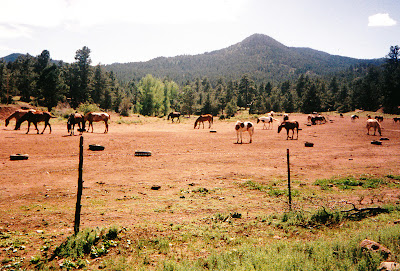 Unlike the folks at the Elkhorn Ranch, we didn't use a tractor to feed our herd.  Instead we relied on the "Nacho Truck."  This old beater was missing a gear or two and hadn't been street legal for years.  Still, it almost always started and usually managed to navigate the pasture without getting stuck in the mud. 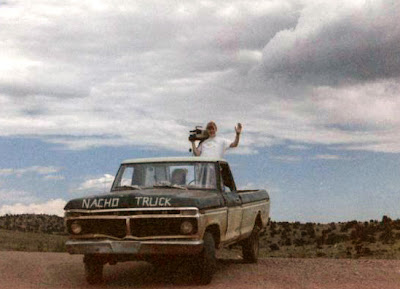 Feeding the horses was a two person job--one to drive and one to "throw."  The first step was to load up the food.  To accomplish this, the driver would back Nacho Truck into the barn... 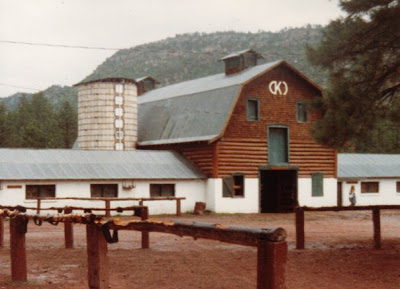 where the thrower was waiting in the loft.  For reasons known only to the ranch owners, we did not feed hay.  Instead our horses lived on a diet of alfalfa pellets.  These were kept in a huge bin up near the rafters.  The thrower would open a chute and the pellets would fall right into the truck bed. 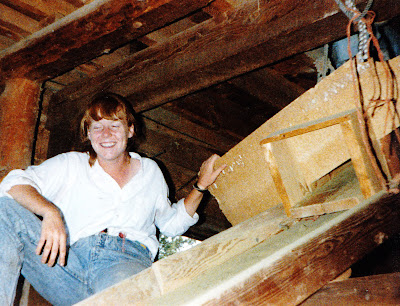 Once the truck was loaded, we'd drive around to the pasture.  If it looks dark in this photo, there's a good reason.  The morning feed started at 4:30 am.
Perhaps the most challenging part of the entire operation was getting the truck through the wire gate without freeing seventy hungry horses. 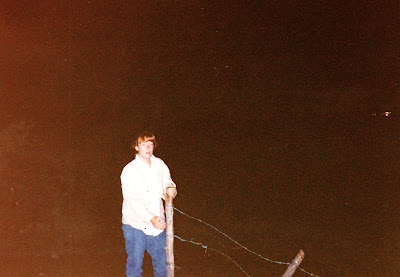 It's too dark to actually see the horses in these photos, but trust me, they were out there. 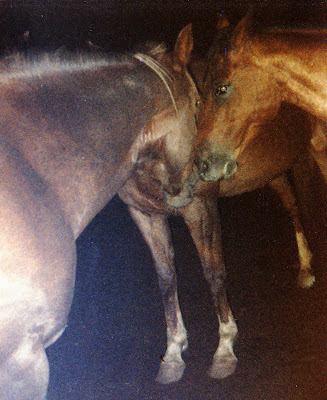 For some reason, I don't have any photos of the main part of the feeding routine.  Basically, the driver would steer the truck up and down the pasture while the thrower stood in the truck bed, shoveling pellets into the feeders.  This was precarious work.  It's not easy to keep your balance in the back of a bumpy truck while standing on a huge load of alfalfa pellets.  More than once that summer, a thrower found him or herself on the ground! 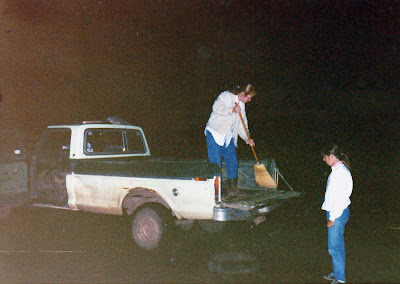 From start to finish, the feeding routine took a little more than an hour.  It was hard work and way too early in the morning, but somehow we always managed to have fun. 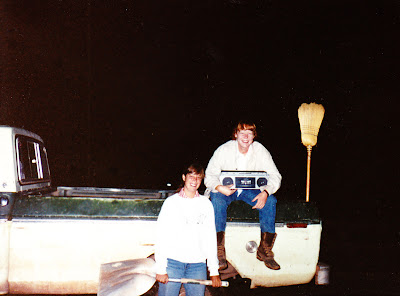 In fact, some twenty plus years later, those early morning feeds are among my favorite memories of life at the Don K!
Posted by Braymere at 3:01 PM