Although I enjoyed every moment of our recent stay in Estes Park, there's no doubt the dinner ride at the Elkhorn Lodge was my very favorite part.

We returned to the Lodge at 5 pm and were served a cowboy style steak dinner with the other riders in our group.  Originally this was slated to be a fairly large number of people.  However, the cold temperatures and threatening skies managed to scare off everyone but ourselves and another couple.  I didn't mind.  Sometimes less is more.

After dinner, we headed out to the corral to meet our horses.  Seth was given a red dun mare named Sundance... 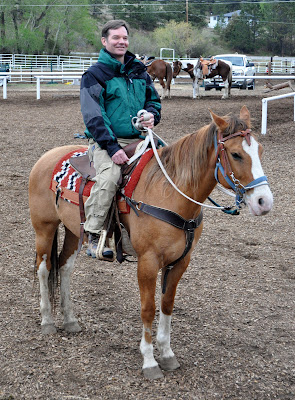 while I was assigned a paint gelding named Cain. 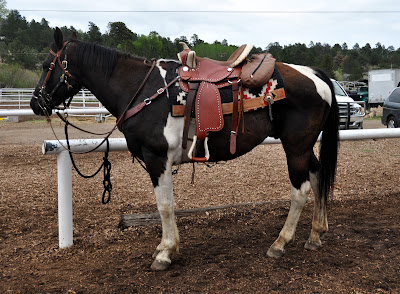 Our guide was a handsome young California cowboy named Rick. 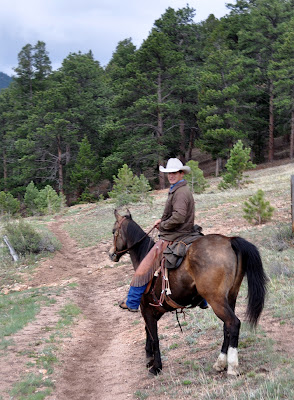 Once everyone was mounted we headed out. 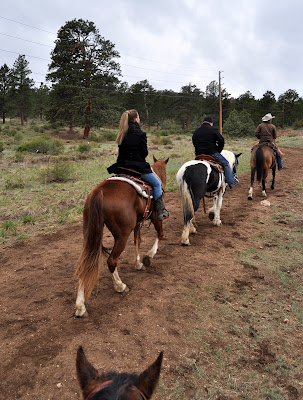 The first part of the ride was relatively flat, 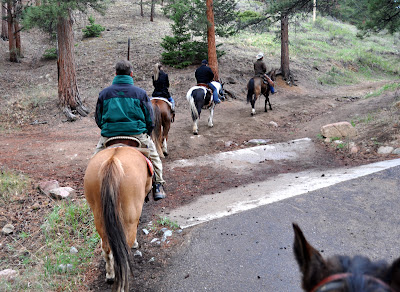 but it wasn't long before we started gaining some altitude. 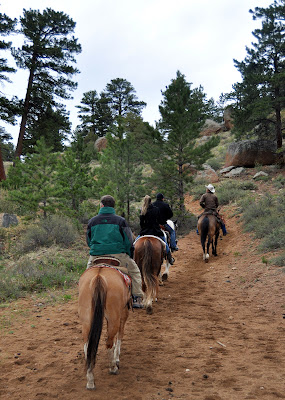 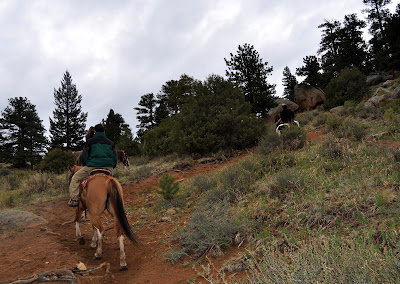 and up we went. 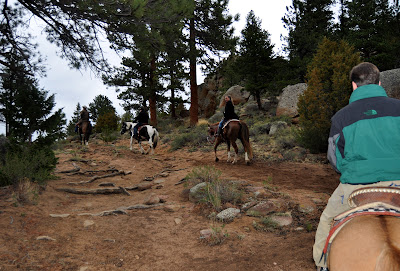 Despite the heavy clouds, 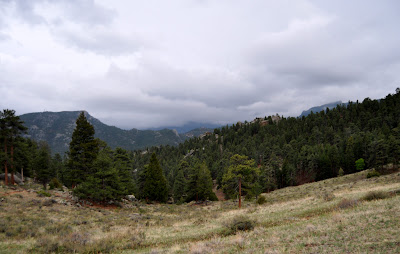 the views were spectacular. 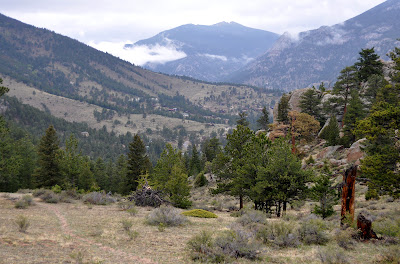 We paused at the top to take photos and rest. 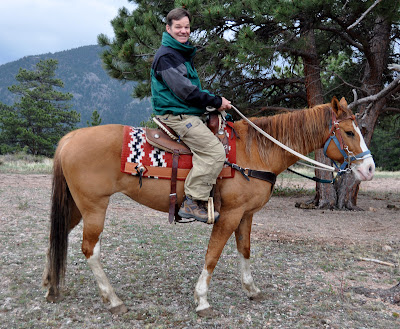 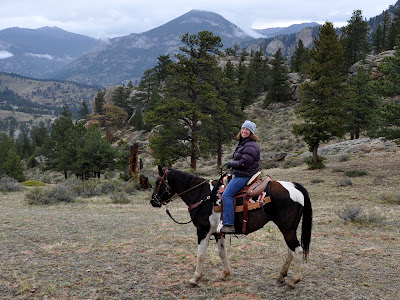 Now this is the way to celebrate an anniversary! 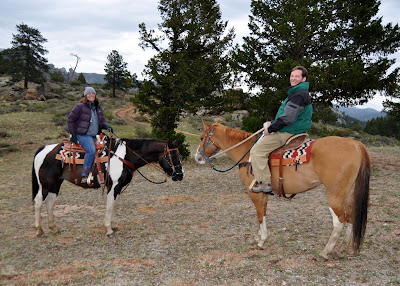 At one point, Seth leaned over to pat Sundance and told her she was the "best horse ever."  I had to qualify that a bit, of course, but these were nice horses.  I'm not  ready to trade in Trillium or anything, but Cain was a pleasant and willing partner from beginning to end. 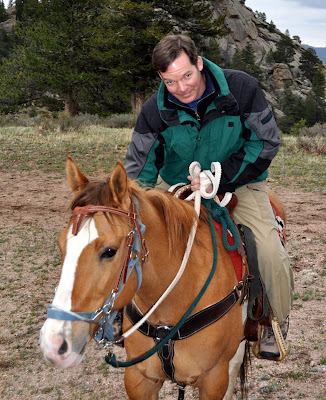 I would have been happy to spend hours up there, but eventually we had to head back down the mountain. 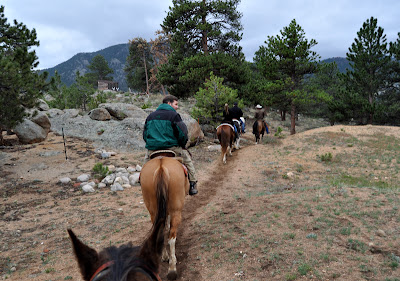 As we began the second half of the ride, the clouds lifted and we were able to catch occasional glimpses of Lake Estes. 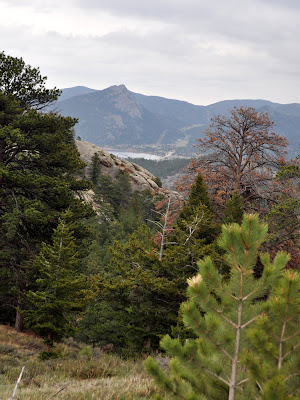 Every turn provided us with another beautiful view. 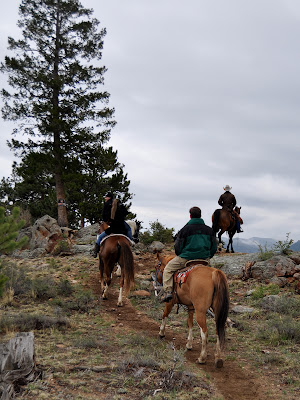 There's no better way to see the Rockies! 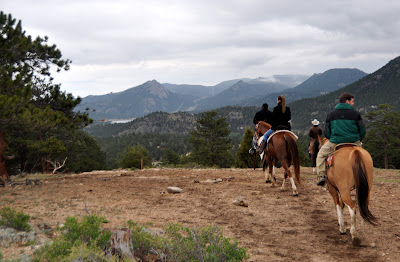 Most of the areas we rode through were pretty remote.  However, we did see a few houses along the way. 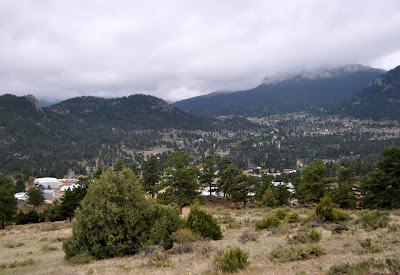 This is probably the only one we could afford! 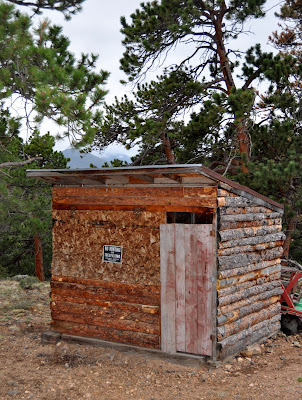 As always, I was hoping to see some wildlife.  The first half of the ride netted nothing more than a few ground squirrels and a bear scratched tree.  However, things took a turn for the better when we ran into a pair of coyotes in a field just past the summit. 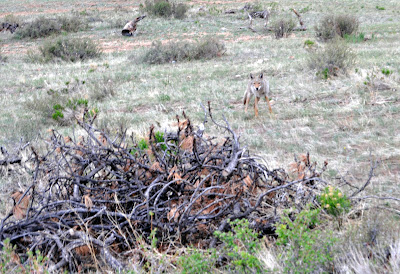 As we headed down the final hill... 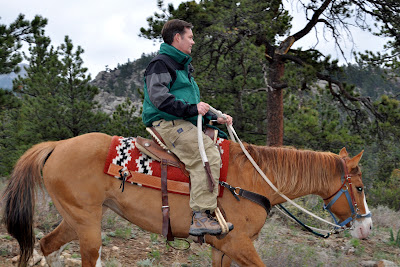 we  came across what appeared to be a single elk. 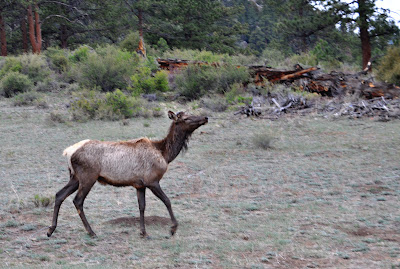 Moments later we found the rest of his herd.  Squee!  I just love elk! 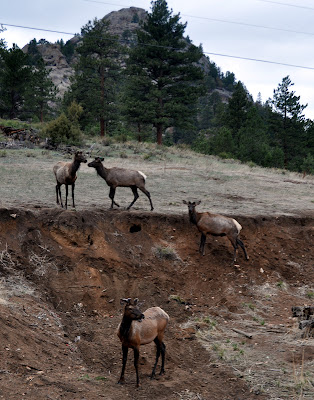 The ride was an hour and a half long, but it seemed much shorter.  Almost before we knew it, we were back at the Elkhorn Lodge.  We took a few minutes to thank Sundance... 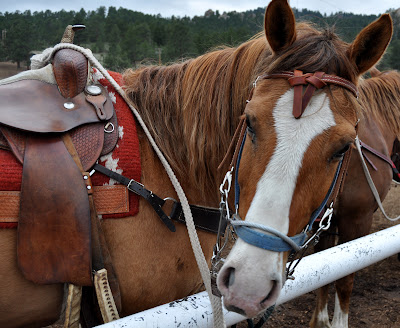 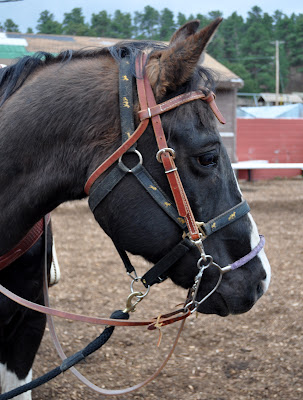 before they were led into the barn to be unsaddled. 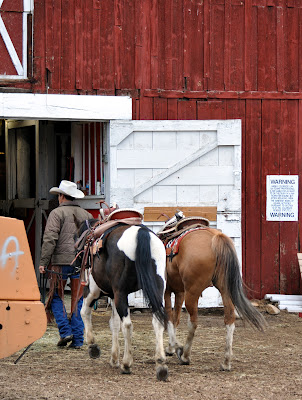 Many thanks to the horses and staff at the Elkhorn Lodge for such a fun riding experience.  I  can't think of a better way to celebrate fifteen years!
Posted by Braymere at 11:32 AM