I have been riding Stealth for more than a year. He is, perhaps, my favorite horse to ride, so I talk about him a lot. 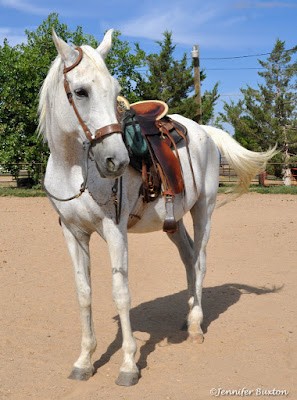 Recently, I was complaining to Seth about white horses in the winter, and how hard it is to keep them clean.

"Today," I whined, "Even Stealth had poop on his head."

"I thought he was black."

"Well, technically he's grey so he might have been born black, but he's twenty years old. He's been white for a long time. Or not white because poop on his head. Whatever."

"I really thought he was black."

Sigh.
It's not just Seth. Mary Jo showed her husband, Ed, the Kenlyn Christmas collage and asked him to identify Scarlett, the horse she's owned for more than a decade. 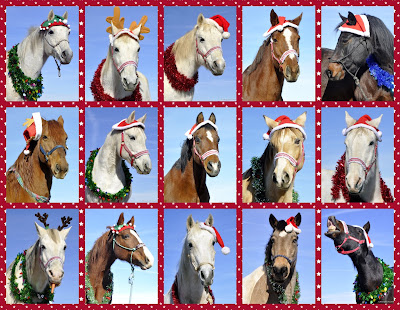 He chose Flynn.
That's understandable. They're both blaze faced chestnuts.
She asked him to guess again. This time he picked Mikey.
Sorry, Ed. That's not good enough. You're getting a lump of coal in your stocking.
We told Flynn's owner, Becca, this story, and she decided to see if her husband could identify Flynn.
He chose Scarlett.
But hey! At least he didn't pick Mikey!
Posted by Braymere at 7:14 PM