China school: round one

Painting a china horse from start to finish isn't something you'd usually do in a weekend. Even simple colors can require as many as five or six passes through the kiln. With each firing taking approximately six hours, there's simply no way to get it all done in a forty eight hour time period.

Last weekend's China workshop was specifically designed to shortcut the process. Karen base-coated our horses before we arrived, and we were strongly encouraged to choose colors and patterns that would lend themselves to faster results. This allowed us to get a feel for China painting process and still have something nice to bring home on Sunday.

Our first studio session started early Friday evening. Karen gathered us together and showed us how to remove paint. China paints go on wet and stay wet until they're fired in the kiln. White markings are not painted onto the models. Rather, they're created by removing the paint from the bare white surface. If you want your model to have white markings, it's important that every bit of the paint on the white areas is removed. Once you fire it on, it's there forever. 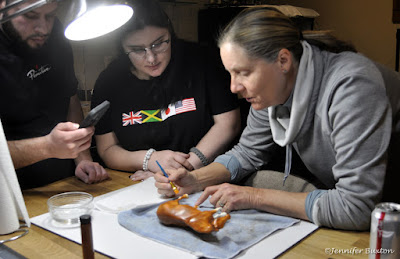 Paint is removed with a wet paintbrush. Karen likes to use a medium sized flat shader. The brush is dipped into tap water, then blotted on a paper towel. It should be damp, but not dripping. 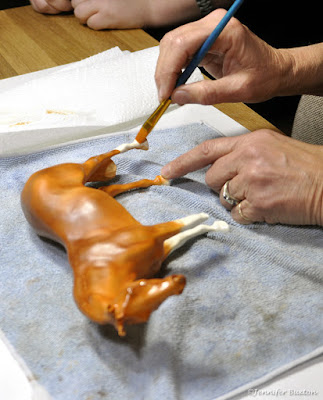 The paint is brushed into the center of the marking. You don't want to push it into the colored ares because that will create build-up around the marking's edges. 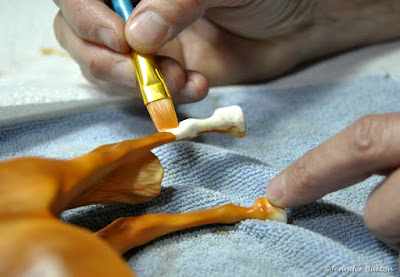 Since the paint needs to be removed - not just moved - the brush must be cleaned constantly. It's really important to get the white areas completely white. 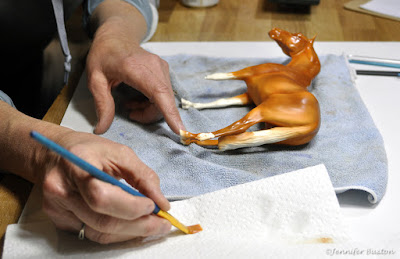 Karen also showed us how to remove the paint from the model's eyes. This was the same process, but with a smaller, pointier brush. 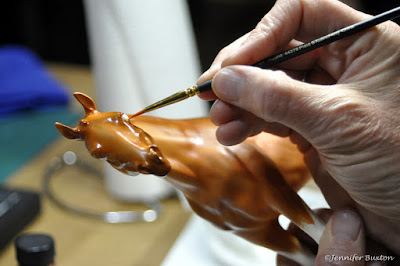 After the demonstration was over, we took turns practicing on the broken Heart of Darkness. This allowed us to get a feel for removing paint, without the stress of holding our own models. 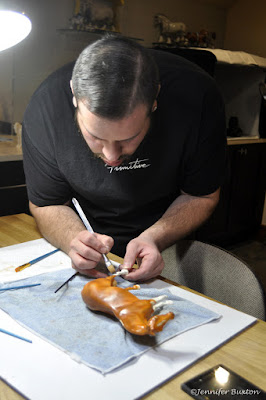 Karen told us that she's heard China painting described as "sliding snot on glass." That's not pretty, but it is accurate. The paint is very wet and very slippery. Even the tiniest touches with a soft brush have a profound affect. 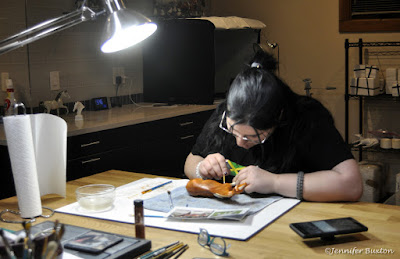 Because of our compressed time frame, Karen recommended we paint a pattern with mostly white legs. That's important because you need something to hold onto while you're painting. You literally can not touch any of the colored body parts without disturbing that wet, slippery paint. I'd planned to do a chestnut sabino, but when I saw what I was up against, I decided chestnut tobiano would be a better choice. Since I always like to work from photos, I flipped through Karen's reference file until I found a pattern that suited me. 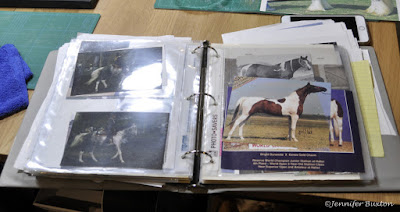 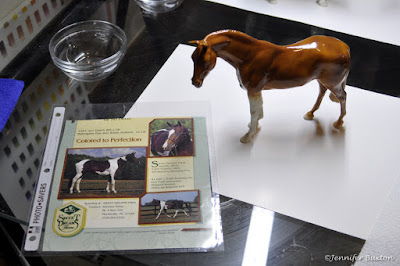 The paint removal isn't difficult in and of itself, but it takes a steady hand and a lot of patience. After more than an hour's worth of concentrated work, my pattern was only beginning to take shape. 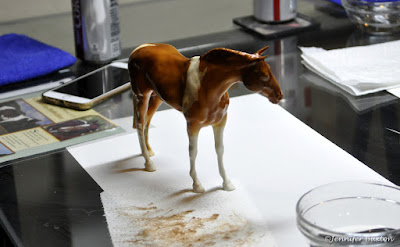 The bigger challenge was holding the horse - remember, we'd already had a casualty - and not touching any of the wet paint. 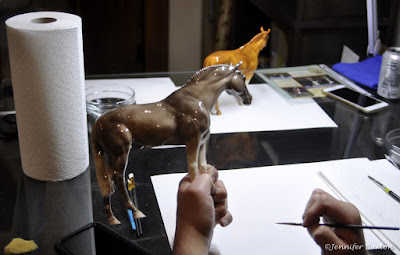 We were mostly successful in that, but everyone had a couple little oops moments. I accidentally touched my horse's barrel after this photo was taken. 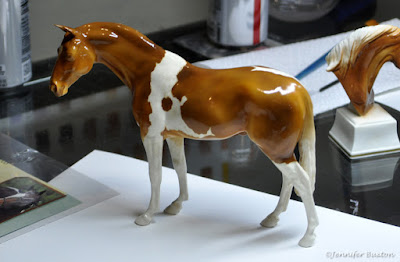 That was easily fixed by expanding the size of the marking along his side. China painting definitely requires flexibility! 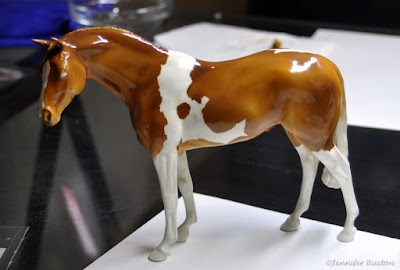 Since I wanted my horse to have a flaxen mane and tail, I also removed the paint from those areas. I did leave some chestnut coloring at the top of the tail, however. 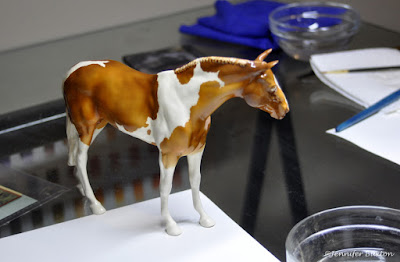 We worked nonstop for well over four hours. By the end, I was really tired and getting a little bit shaky. Karen kindly stepped in and cleaned up some of my less than perfect edges. I really appreciated that! 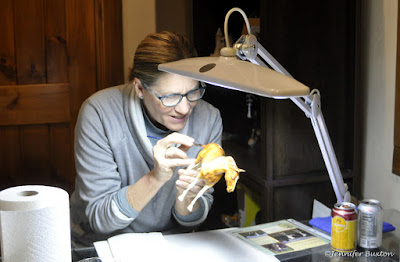 Finally, our horses were ready for the kiln. 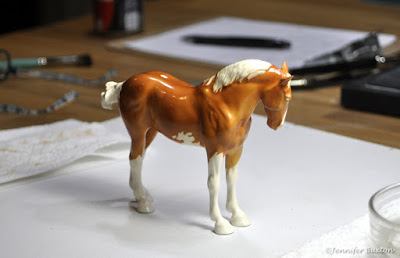 We checked them over one more time. 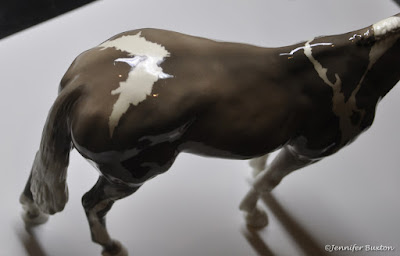 Then carried them downstairs to the kiln. 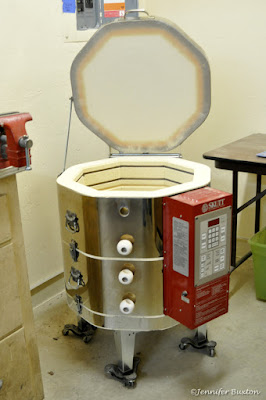 Each firing takes about six hours. Karen started the kiln, and we all went to bed! 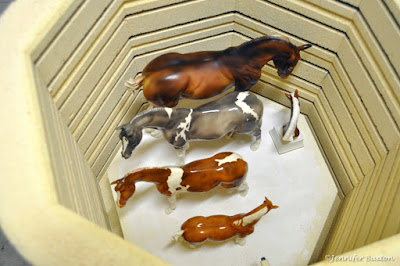 Our first lesson in China painting was complete. Now we were ready to learn about shading and detailing.
Posted by Braymere at 4:01 PM