During the run up to the Jennifer Show, I published three separate guest posts on cross country travel with models. It's a daunting proposition, and sometimes - despite all your best efforts - things still go wrong. Darleen Stoddard's last Jennifer Show post tells the story of one of these travel mishaps. Don't worry, it has a happy ending!

To the Jennifer Show and Back With and Without My Ponies

Surely leaving a restaurant about an hour away from the airport when your flight it not for three hours is plenty of time, right? Wrong. I am always early to the airport... like stupid early.  But I wanted to eat lunch with the trail ride crowd, so I decided to cut it a little closer than usual.
I needed to get gas so that I didn't have to pay the rental place $10/gallon, and then I hit traffic in Denver. Of course! My one hour drive turned into more like one and a half, and then I waited for the rental car shuttle to the airport. 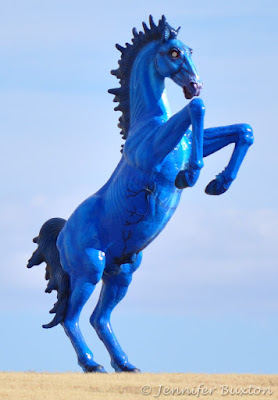 When the driver finally arrived, we all packed in like sardines with all of our luggage. Hmm, not a good sign.  Multiple stops later, I shuffled my three bags in and up an escalator (that was interesting), checked my two bigger bags, and headed to security. No joke, the security line was like the size of the Jennifer Show hall filled with people. I still had almost an hour before boarding, so wasn't *too* concerned. The line was moving at a steady pace, and there were drug sniffing dogs that I was fascinated by. Security screening was a non-issue, no rub down this time, and I started to pack up my things. Hmm, felt like not enough stuff, but I emptied two bins worth, and that's what I had remembered filling. Off I rushed down the stairs to catch the train to my gate.  And who should I run into, a familiar face from the trail ride!
We gabbed a little until Amy got off at the next stop.  Then I realized my carry-on roller bag was gone!  It contained pretty much the top tier of my show strong.  Some were ones I painted. 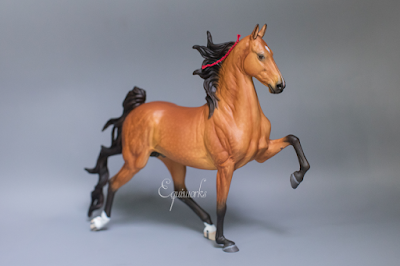 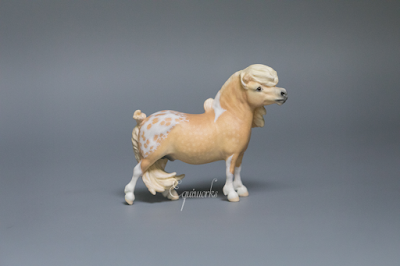 Some were painted/customized/sculpted by some of my favorite artists. 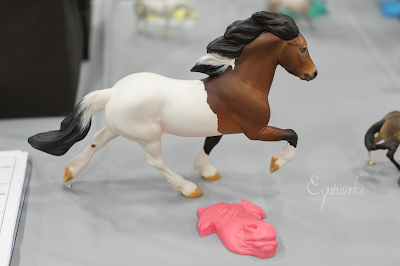 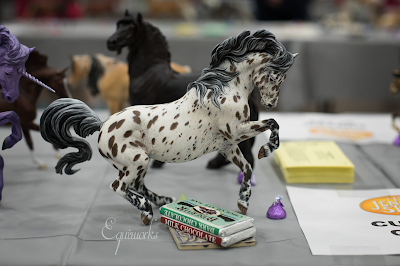 My Fritz, Kylee Medallions I just bought at the show, prizes I'd won... Most of it was irreplaceable. The luggage was brand new, and was supposed to stay with me, so I hadn't put my name into/on it. 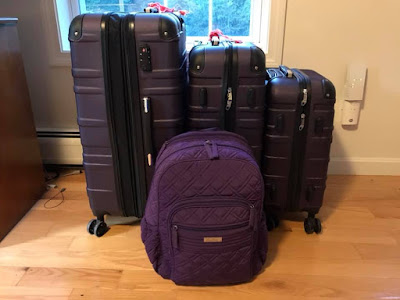 I panicked!  All I could think was that Amy had accidentally grabbed it on the way off the train. I realized that I had her number, so texted her and asked. She probably thought I was crazy. I got on the next train in the other direction and called. She remembered that I did not have my roller when we met getting on to the train. I thought back, and all I could come up with was that I had left it when I was packing up my stuff near security. Okay, back to security! But the train opened in the wrong direction, and put me on the wrong side of security. I had about fifteen minutes before boarding, and I was on the wrong dang side. UGH. I did not have enough time to go through it again and catch my plane, so I gave my sob story to the poor TSA agent at the beginning of the line. He pointed me towards another checkpoint on the other side, so I ran my bloody-stump two-days-of-showing-and-two-hours-of-riding legs to the other checkpoint. I was panting, sweating everywhere, and gave my sob story to another poor TSA agent. This one let me through the wheelchair access line, and I quickly threw my stuff on the screening belt. Of course this time my stuff needed to be searched, and no TSA agent to do so. I danced, and fought back tears as I waited for one to wander over, then for my two remaining carry-on models to be slowly unwrapped and thrown back into my backpack. At this point it was five minutes until boarding, and I still had to catch the train to my gate. I had to decide to either miss my flight and hope to find my bag, or catch my flight and somehow hope they'd find my bag and ship it to me. I thought my $$$$ worth of models were lost to me, and I did not want to have to pay for another flight on top of that, so I bolted to my gate and got on ten minutes after the start of boarding. There was just enough time to text my husband about what happened and post my sadness on Facebook before shutting off my phone to endure a four hour flight and think about it.

As I sat there thinking, I realized that I had left my roller bag on the screening belt. This gave me a little bit of hope. I also remembered reading something about paying $8 so I could text through the airline app. Turns out iMessaging is free, so I was able to relay information about my luggage to my husband. He called lost & found, and they asked what was in it.

Husband: "Plastic horses."
Lost and found guy: "Oh yes, this is definitely your bag!"
Husband to me: "They have your bag!"
Me: *crying happy tears while surrounded by strangers*

I then had my husband log in to my Facebook account to let people know, as I had a feeling there would be somebody reading and worrying as well. And that is when I was reminded, yet again, just how awesome my friends in this hobby are. One friend tried calling the lost and found for me.  Jennifer and Teresa Buzzell both offered to pick it up.  So many people were concerned, and then relieved when it was found, as if it was a bag of their own models.  Teresa has agreed to kindly pick it up and repack to ship back to me. I shall be forever grateful, and there will definitely be repayment in some form or another.
Over the past couple of days, I've had plenty of time to reflect on that roller bag full of models. When I thought it was gone, I had moments of just wanting to step away from the hobby again. But I was reminded yet again how awesome the people are, and why I worked so hard to get to the Jennifer Show in the first place. And if it happens again, I will be back! I will work very hard to get a whole Region 10 contingent there, and I plan to spend the next three to five years painting until my eyes bleed. I hope to one day be on the other side of things... inspiring others and helping others. Please join me!
Posted by Braymere at 10:12 AM