The Resin Halter classes at Glyn Haven's Autumn Horse Faire opened with the Draft/Other division.  My day got off to a slow start with the Clydesdale/Shire class (I don't own any!)... 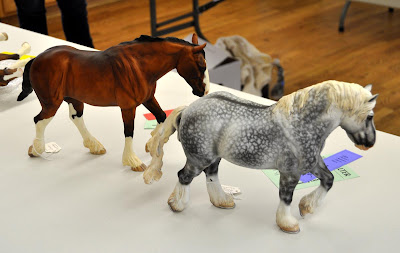 but it wasn't long before the Braymere gang made its presence felt.  BFF and Dhaulagiri's two good ribbons in the Belgian Percheron class... 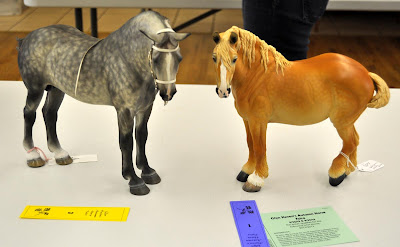 were followed by Jennibray and Emma's even better ribbons in Longears/Exotics. 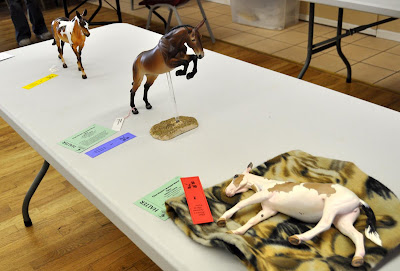 Now that Emma is semi retired from the Performance ring, she's working towards her ROM in halter.  Three down, three to go! 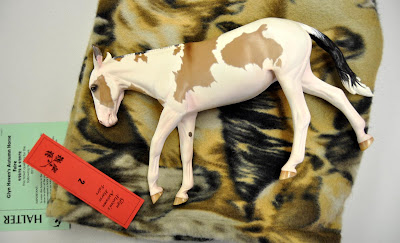 Bangles kept the blue ribbon streak alive with her win in the Other/Mix Draft class... 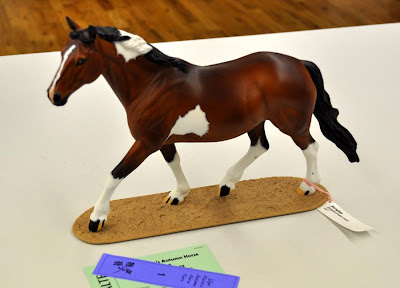 and BFF won the Draft/Other Breed Championship with Jennibray in Reserve. 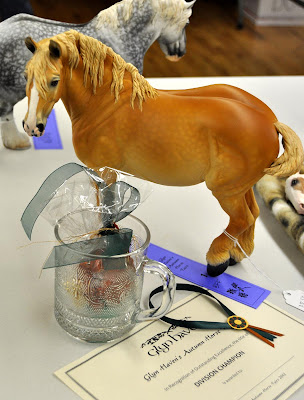 Stock Breeds were next.  The top three placings in the Quarter Horse classwent to Matriarchs.  This one is owned by JerryLynn Rice and was painted by the multi talented showholder, Jane Schneider. 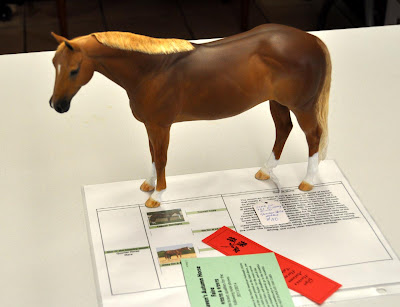 My own Matriarch, Love N Stuff, was third and Zips Cocco Chip was fifth. 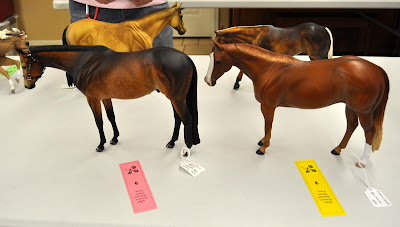 My two Liesl Dalpe painted overos were one-two in the Paint class.

Like many of the classes at this show, the Appaloosa class was small but mighty.  After a lot of consideration, judge Jennifer Scott awarded first and second place to the two Eberl models on the camera side of the table. 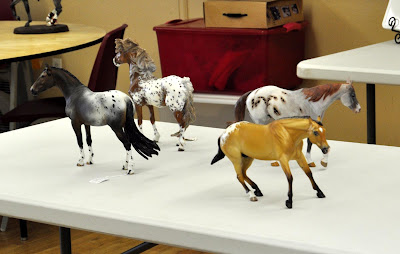 Because we have a pretty small pool of resin halter showers in Colorado, new horses often attract a lot of attention. 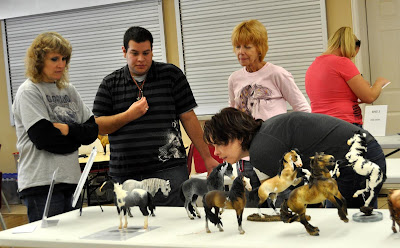 Of course this new Brio Sambra painted by Mindy Berg would be a standout in any showing.  Love the brand detail! 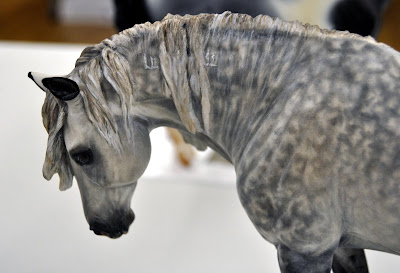 The last class of the Stock Breed division was Other/Mixed Stock.   That was won by my own Prodigal Daughter. 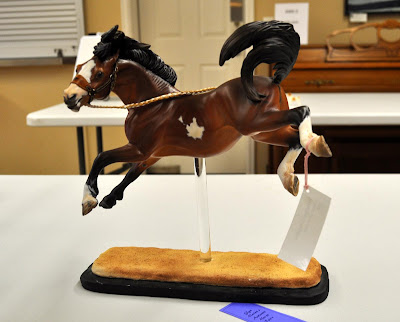 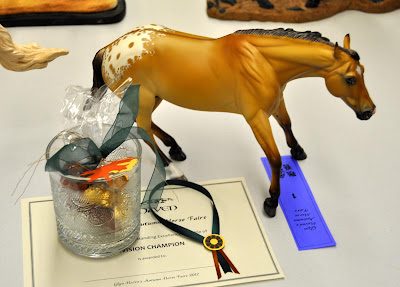 with Teresa Fedak's Surprise in reserve. 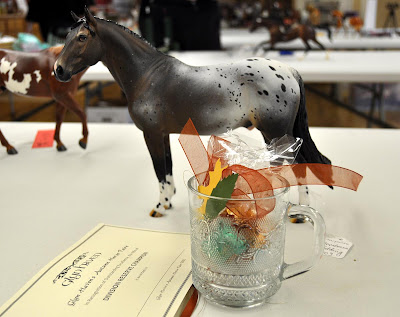 On to Sport Horses!  Validator won the Thoroughbred class... 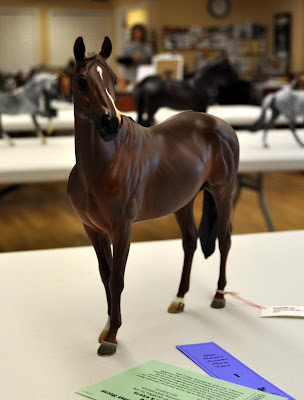 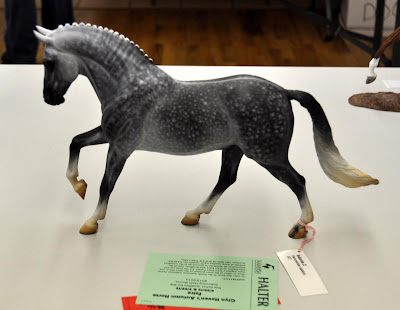 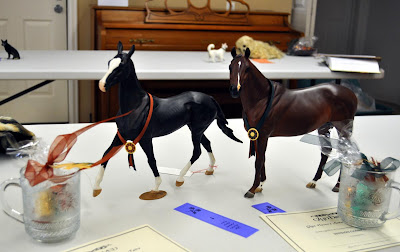 The Gaited Breed division was tiny.  In fact, I think the Saddlebred class was the only class with multiple entries.  Given that, it was no surprise when the Saddlebreds swept the championships. 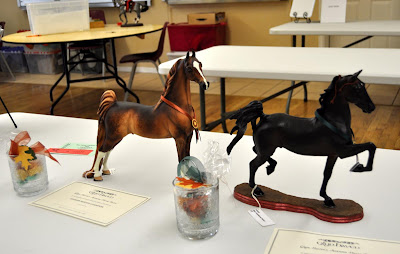 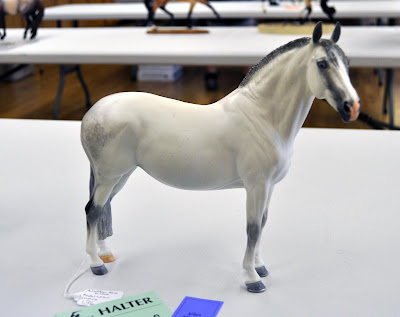 with Estudioso picking up second place honors.  These two came back later and were named Spanish Breed Champion and Reserve. 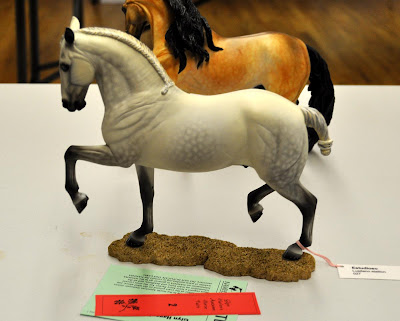 Poor Estudioso--so many top placings and he still doesn't get any respect! 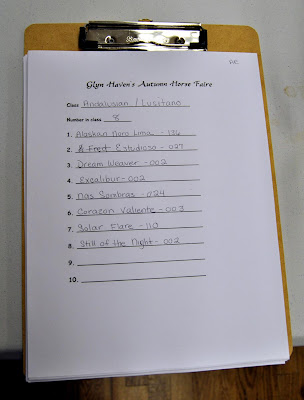 Stay tuned for the thrilling conclusion of the resin halter division at Glyn Haven's Autumn Horse Faire.
Posted by Braymere at 9:56 AM