I'm taking a break from show reporting today, to feature Australian hobbyist, Danielle Seivers' good performance model dp. Jettsetting Playboy, who is affectionately known as Rocky.  Thank you so much for sharing him with us, Danielle!

dp. Jetsettin Playboy, aka Rocky, is an OF Breyer Classic 'Wahoo King' #6014 from the early 2000s. I do love action models, and Wahoo King fits that perfectly! When I bought him in 2008, he cost me less than $15 US, and survived the journey down to Australia with only a couple of small box rubs on one pastern. 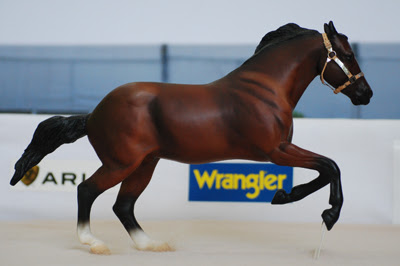 Over the years he has been a somewhat successful photo show horse, but he never stood a chance in the live show ring with his chunky older-style conformation, and competing against traditional resins and customs. 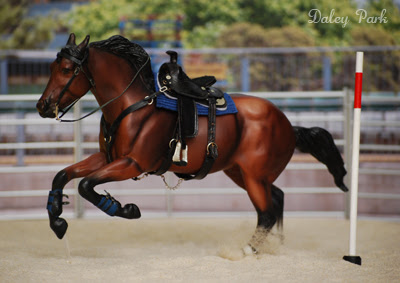 All that changed at Performance Extravaganza Live Show on Sunday 23rd September this year. Armed with my brand new Evelyn Munday saddle (which was also a bargain at $175 US) and a homemade bridle, Rocky rocked the OF performance division, winning not just the Western Speed Games class, but also placing in Other Western Performance with a reining set up. I was thrilled - he was competing against traditional Breyers and EFC Stone models so I didn't think he had had a chance! 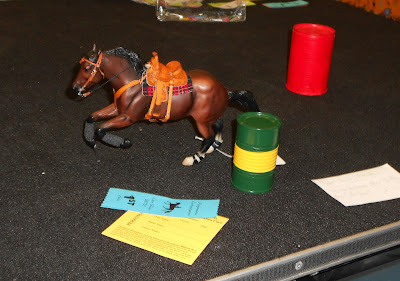 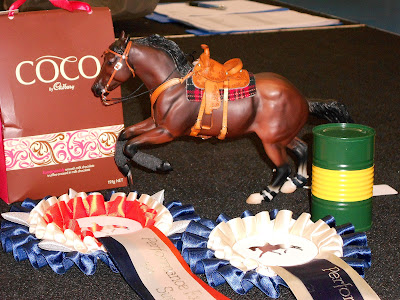 I couldn't believe it - with his few rubs and homemade bridle, I didn't think he would ever go as far as he did at that show. But now little Rocky has pride of place on my shelf, next to his giant Supreme rosette!

P.S. from Jennifer--Congratulations, Danielle, both for your live show victories and for snagging an Evelyn Munday saddle before the prices skyrocketed.  I wish I had been smart enough to do the same!
Posted by Braymere at 4:10 PM