A Visit to Colonial Williamsburg

Today's post is a virtual tour of Colonial Williamsburg.  Many thanks to Christie Partee for sharing her words and photos.  This living museum has definitely been added to my "to do" list!

A Visit to Colonial Williamsburg

Over Labor Day weekend, my husband, our mothers and I visited Colonial Williamsburg in Virginia.  It is the nation’s oldest and largest living history museum, and is the actual city of Williamsburg, the colonial capitol of Virginia. There are eighty eight restored buildings in the site, and the museum’s goal is to recreate a day in colonial Virginia as closely as possible. In addition to daily activities, such as the Fifes & Drum Corps marches and readings of the Declaration of Independence, there are costumed characters walking the streets and working in various colonial trade shops (weavers, blacksmith, apothecary, etc.). And there are a LOT of horses! This is especially noticeable during the hot, humid Virginia summer weather during our visit. When we first arrived in town, my mother and I both took a deep breath and she said, “It smells like horses here!” Visitors can’t help but notice the horses as there are carriages and wagons being driven through the streets, and the occasional ridden horse, too. We found it ironically funny that CW even leaves the manure in the streets (they are cleaned overnight) to add to the “ambiance” of the era!

Before a visit to CW, it’s highly recommended to study the website and familiarize yourself with the day’s events, activities, and the available special tours. One special tour, called “Bits and Bridles” is only given once a week, and is only available to CW Annual Pass holders and hotel guests, and reservations for the tour must be made in advance. The website said the tour offered a “behind the scenes” view of the CW stables and carriage operations, as well as their Rare Breeds program. Of course, as soon as I saw this tour on the website, I called ahead and added it to our reservations! So, on 1:00 Saturday afternoon, I found myself surrounded by 24 other horse lovers, eager to get a view of the CW stables. Our tour guide was a nice volunteer who was very well-informed about CW’s operations.

Obviously, an operation on the level of CW is going to have a very impressive barn, and it was indeed very nice. 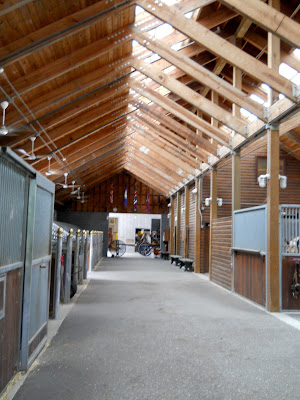 The ceiling fans kept a good breeze going, and even on a hot day, it was surprisingly cool in the barn. Most of the horses are kept in paddocks surrounding the barn overnight and on their days off, and when they are brought in the barn to be saddled/harnessed, they have box stalls and a few straight stalls (visible on the left side of the barn). The tour guide said they also use the straight stalls for the sheep during spring lambing by adding a panel gate at the end of the stall. The tour was only given at 1 PM because that is the horses’ and drivers’ lunch break time on Saturdays, so all of the horses being used that day, as well as all of the vehicles, were on display in the barn.

This was our favorite of the carriage horses, and he’s a 8 year old percheron cross. This was in a paddock behind the Governor’s Palace, and he was obviously enjoying his day off. 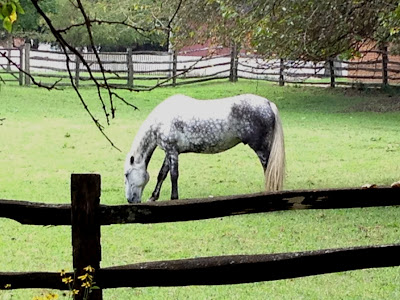 The horses themselves are very correct for the time period. Our guide said that “we don’t put a horse on the street unless he looks Colonial.” The horses in CW’s program are all purchased from Mennonite farmers in Canada, are usually mixed breed draft/Standardbred crosses, and are always geldings. The primary consideration for CW when purchasing horses is temperament, since the horses are highly visible and visitors are allowed to touch them. The horses need to have sturdy feet and legs since they walk almost totally on pavement in the city’s streets. The CW farrier adds borium to all of the horses’ shoes to give them the additional traction on the pavement. They use commercially-made shoes since the shoes are uniform, and they go through too many horseshoes to have their blacksmiths make them on site! The tour guide offered to give all of us a used shoe, but since I was flying home, and I feared the TSA would take away my souvenir, I declined.

Most of the horses are used for pulling carriages, although some are ridden, too. Part of their Rare Breeds program is the Canadian Horse, which was very popular for riding back in the colonial times. Sadly, the Civil War killed approximately 30,000 Canadian Horses who were used as cavalry mounts, and they are quite rare today. CW currently only has one in their barn, but they are looking for more.

This is George Washington reviewing the troops on the village green. Notice the open bridle; none of the ridden horses I saw wore a cavesson on their bridles. 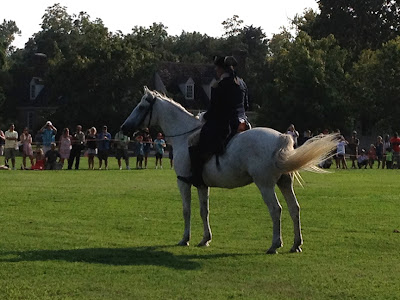 Obviously my favorite room in the barn was the climate-controlled tack room! With the Virginia humidity, that would be a must to keep their tack from becoming moldy! Although we were not allowed inside, we could take photos through the glass door. I found it very interesting that even on a busy Labor Day weekend, they only had 3 teams harnessed. Judging from the amount of tack still hanging on the walls, they could have saddled and harnessed many more horses! 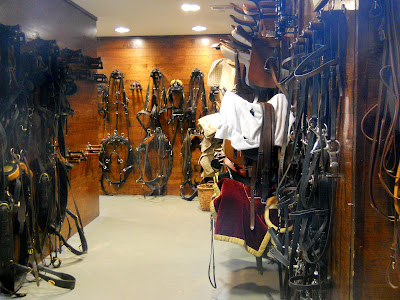 All of the harnesses used on the horses were basically the same style as today. I guess harness styles really haven’t changed much in 250 years! The CW horses all use breeching on their harnesses since there are several good-sized hills on the property, especially around the stable area.

Outside the tack room, a colonial-era sidesaddle was on display. It was quite different from a modern one: it had no leaping head, and the seat was not flat. The tour guide said the lady riders tell him it is neither a very comfortable, nor a secure, seat, and they actually don’t like riding it. 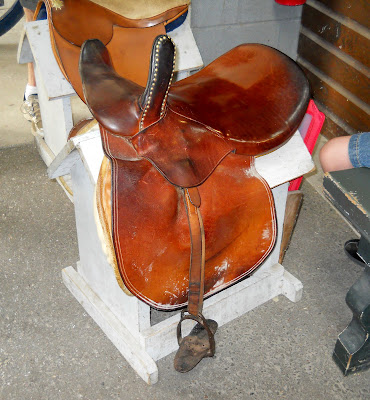 Beside the sidesaddle is a colonial astride saddle. I didn’t get a closer photo of it since it is very similar to our modern English saddles.


Then, we moved on to the “garages” where all of the carriages and coaches are kept. Most of the carriages, except one, are reproductions of colonial-era vehicles. They are made by a company in Kentucky. I asked the tour guide if he knew the cost of the carriages, and he said that the staff are not told the price/value. The carriages are all commissioned by CW, and the purchase price is donated by various donors. Those of us who have ever purchased a model horse vehicle can begin to estimate the worth of the vehicles in CW’s collection!

This is the Governor’s Carriage. The crest on the door is the English lion and unicorn that’s seen in the CW Governor’s palace. I did find it interesting that the team that pulls this carriage is the only matched team in CW’s stables. 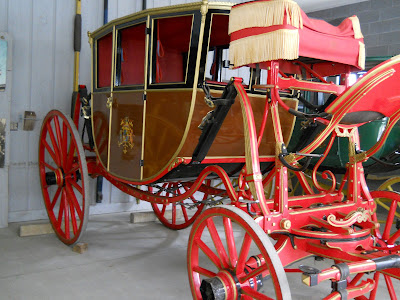 Here’s a photo of the Governor’s Carriage on the street: 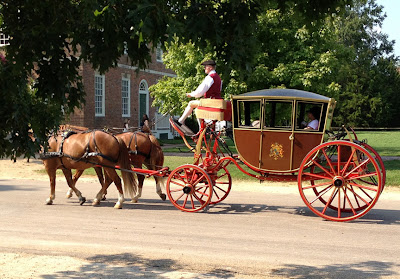 The next carriage is the Carter Family Carriage: 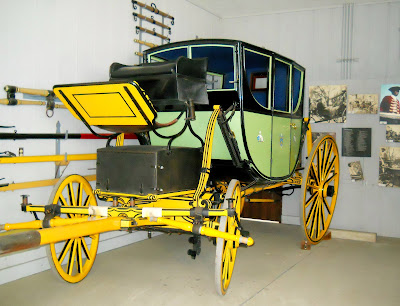 This is the one carriage in CW’s collection that is an actual restored period carriage! They rarely use it on the streets for this reason. Notice the photos on the wall behind the carriage. They are from Queen Elizabeth’s visit in 2007. She enjoyed driving around the streets of CW in one of the carriages!

The next one is the Royal Carriage: 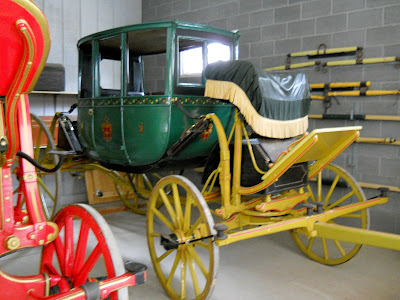 This one is also not usually used on the streets.

Notice the suspension system on these carriages. The “box” for the passengers hangs from the carriage frame on thick, leather straps as seen on this red Vis-à-vis carriage. 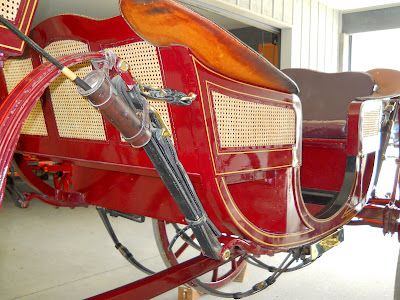 It’s supposed to provide a less bumpy ride that is more comfortable for the passengers. I’m used to seeing stagecoaches and vehicles where the box is attached to the frame, so I found this very interesting!

Here’s a pic of another Vis-à-vis carriage out on the street. 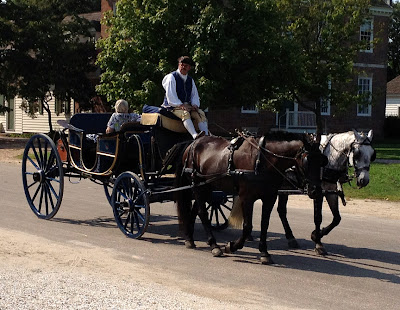 CW has 3 of these Vis-à-vis carriages since they are very popular for the carriage rides. One is black, one is blue, and one is red with the cane trim.


Several other carts were in a second garage. These are not often seen on the streets unless they are part of a reenactment of some sort.

This farmer’s cart can be pulled by horses, but is usually pulled by oxen. CW has several teams of Red Devon oxen in their Rare Breeds program. The sheepskin “seat” on this is from their rare breed Leicester sheep. The guide said that breed was very common in colonial times because the long wool fibers were popular for hand spinning, but lost out to other breeds when machine spinning was invented. To obtain these sheep for the Rare Breed program, they had to go to Australia to find them! 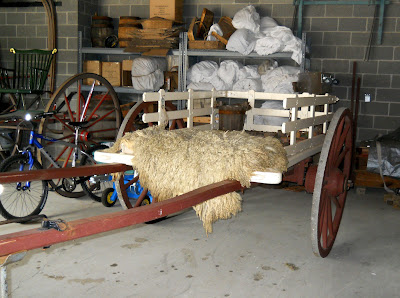 The black modern marathon cart next to it is used for training new harness teams. (The tour guide wasn’t as familiar with this, although he was impressed that it had a disc brake system.)

This is the Fairfax Chair Cart, which is a reproduction of one of George Washington’s personal carts. (The original is on display at Mount Vernon.) They said that occasionally, the re-enactor who portrays George Washington will drive this cart, but he usually is riding his horse instead. 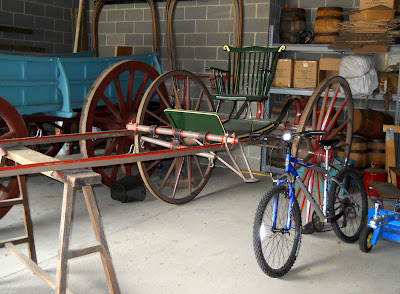 Beside it is another farm wagon that is usually pulled by oxen.

This wagon was parked in another garage during our tour but I caught a photo of it in use carrying passengers on the streets: 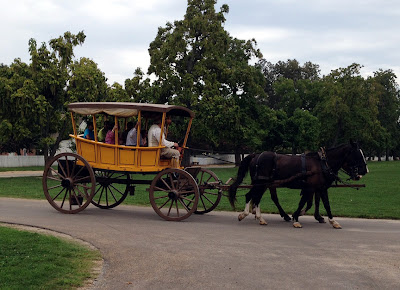 That was the end of our tour. The guide did show us a plaque from the AQHA that commemorated the first Quarter Horse races, which were held in Colonial Williamsburg. Obviously, there’s no need for the Quarter Horse to be part of CW’s Rare Breeds program, so they don’t use any of them in their stables. Sadly, the quarter mile strip where the races originally took place is no longer on CW property, and is actually a city street in modern days. So, the plaque was placed near the barn area. 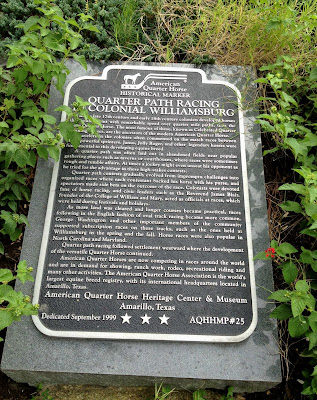 That’s it for my stable tour of Colonial Williamsburg! If you ever get a chance to visit, DO IT!
Posted by Braymere at 10:01 AM