A couple weeks ago, the kids and I were shopping and we came across a display comprised entirely of bright pink and animal print merchandise.  We paused for a moment to take it in.  Then James shook his head disapprovingly and said, "That's way too Tiff-ilicious."

I have finally completed Tiffany's circus pony set, and I have to say, it's mighty Tiff-ilicious. 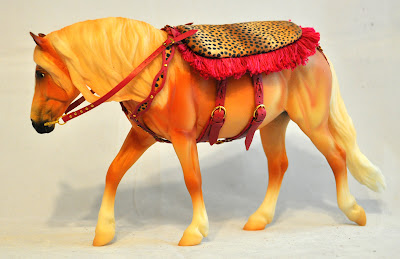 Here's the bridle.  I couldn't photograph it on the pony because it doesn't actually fit her.  She's a wonderful mold, but that forelock...  Sigh.  Talk about not tack friendly! 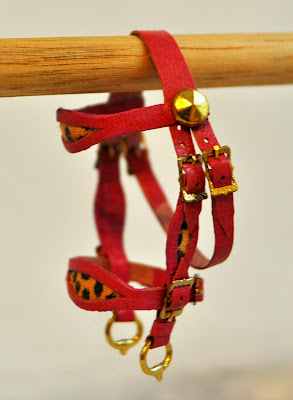 Another view of all the pieces.  In case it's not obvious, this set is loosely based on the tack worn during the dog and pony act at the Carson & Barnes Circus.  It will be used with custom Breyer pony and a specially sculpted long hair Chihuahua. 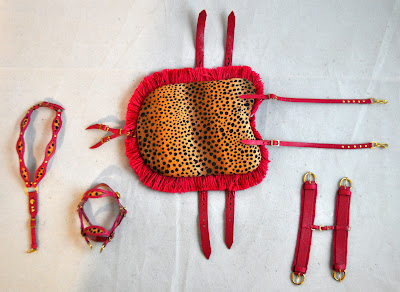 Even when I'm making something this fanciful, I always try to incorporate realistic construction values.  Note the no-nonsense rigging hiding beneath the fringe. 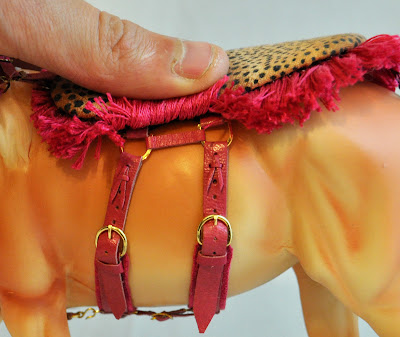 On the other hand, I did have to go with a "cheater" crupper.  Rather than passing under the model's tail, this is simply sticky waxed into place. 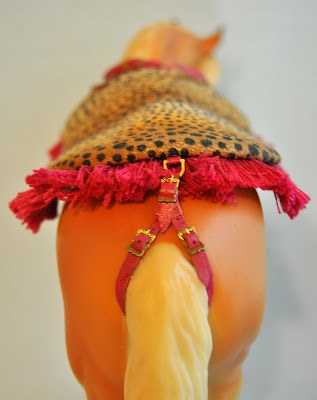 Although I am quite pleased with the final result, this wasn't a success only journey.  I struggled quite a bit with the design.  It's a fine line between Tiff-ilicous and trashy, and I ended up removing all the crystals and redoing a couple pieces entirely. 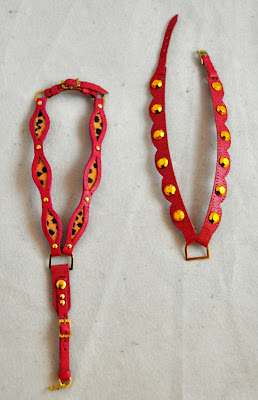 Hope you like it, Tiffany and good luck at NAN and Breyerfest!
Posted by Braymere at 4:37 PM