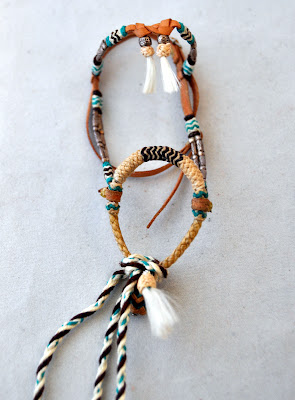 Sue is perhaps most famous for her exquisite braidwork, and she brought with her a wide variety of model headgear that beautifully illustrated the progression of her talents. 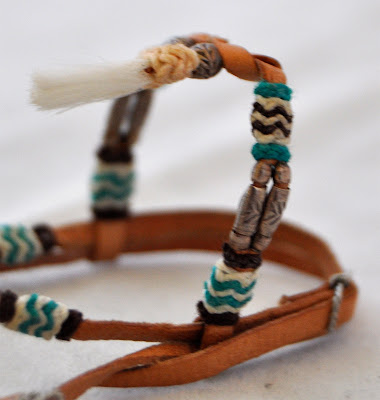 I wish I had taken better notes!  Sue names all her pieces, and I believe this is Butterminx's bridle which was completed in November 2000. 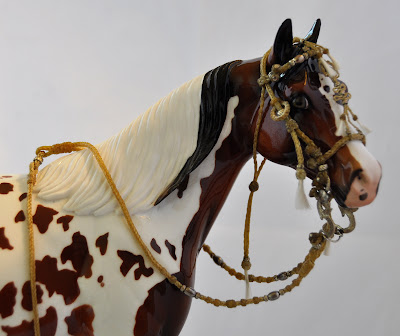 If I recall correctly, this flat braid bridle is of a similar vintage... 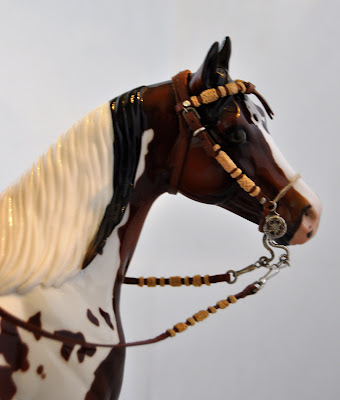 but I'm quite certain this mechanical hackamore is a more recent creation. 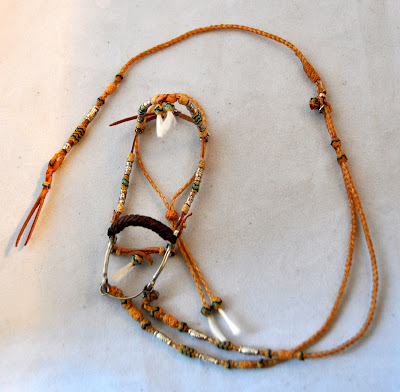 I really, really love this one so it gets two pictures, one off the horse and one on! 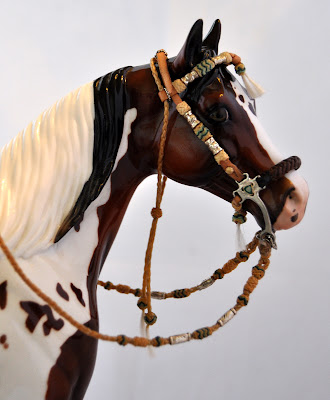 Like myself, Sue is a tack collector as well as a tackmaker.  Her travelling tack museum included a wide variety of pieces by other artists, including this lovely black and blue bridle by Heather Moreton... 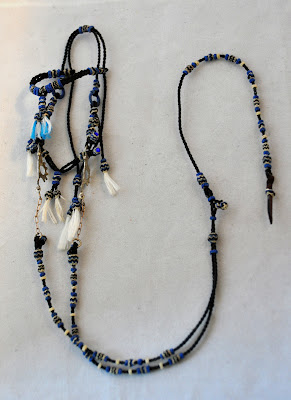 and this marine cord and bead combo by Rebecca Dunne. 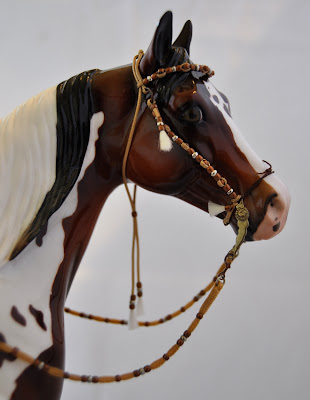 I hadn't intended to show Sue any of my own braidwork because, well, it's simply not in the same league as hers.  Despite that, Nejmet's bridle managed to find its way to the table.  I was immensely flattered to hear Sue give it a favorable review! 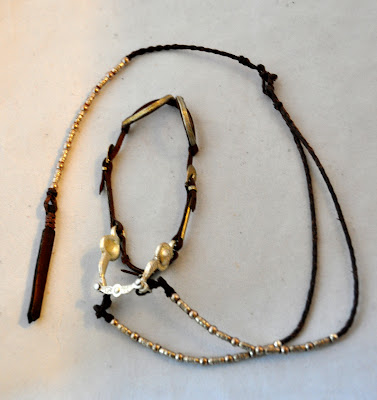 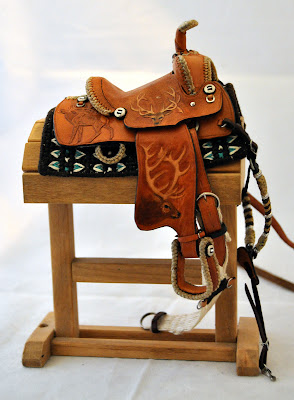 The Elk Saddle was built by Sue in 2004.  Here's a small excerpt from her webpage that describes its creation: Made and kept as a prototype, it was on this saddle I learned to do metal-cored trees--- a huge leap of technology for me--- as well as sinew edge-braiding on stirrups and many other places, plus a thrilling new way to do welts (shoulder seams)...The figures started out natural-colored, and were hand-dyed in until only the antlers remained white.  Note the design which allows elk antlers to co-exist with the rear skirt concho... quite a challenge. 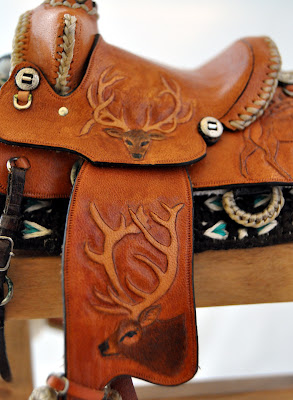 Like the Elk Saddle, the Peach Rose is also decorated with a combination of tooling and braidwork. 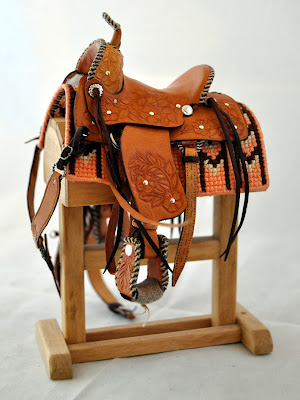 Amazing from every angle! 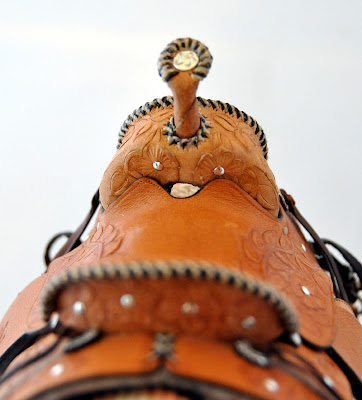 This parade saddle is an older piece having been made in the mid-1990's. 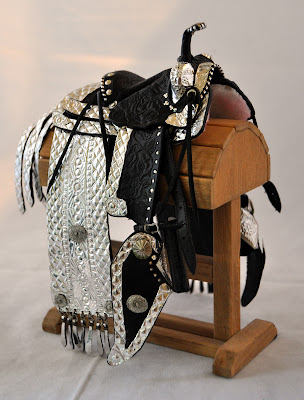 If I recall correctly, Sue doesn't actually own this set.  Instead, it's come back to her for repairs and a new corona blanket. 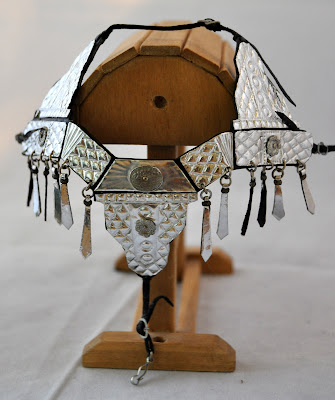 Some of the other saddles in Sue's collection include this older piece by Terry Newberry... 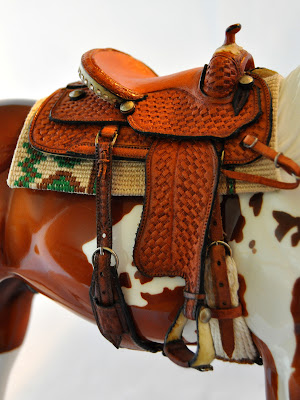 and this brand new saddle by Evelyn Munday. 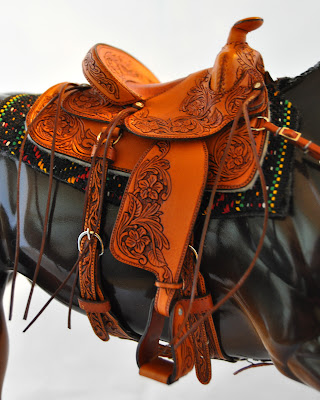 Evelyn is fairly new to the model tack world, but you would never know it by looking at her saddles. 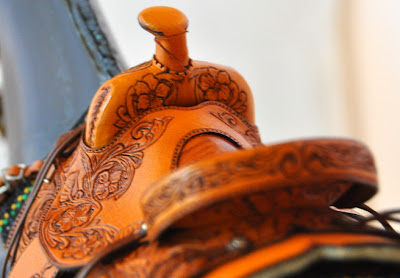 They are absolutely packed with details and the workmanship is top notch. 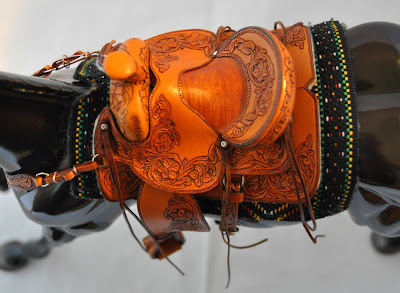 Although it's not as fancy as the others, I was also pleased to see that Sue had an old Kathleen Bond saddle in her possession. 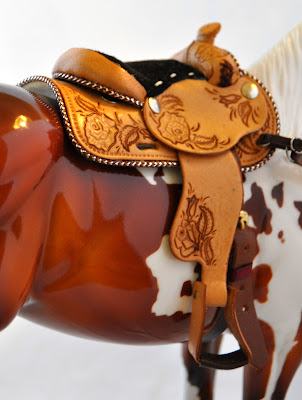 Look, I have one, too!  It's worth mentioning that mine isn't completely original.  I bought it second or third hand many years ago and did some repair work to the seat and billets. 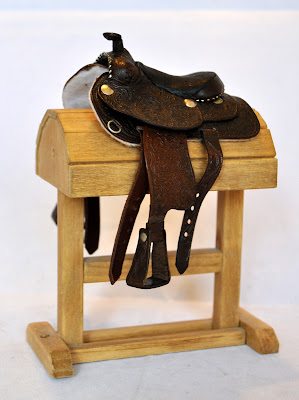 Although this was a mostly Western tack extravaganza, there were a couple English saddles on the table as well.  Not surprisingly, most were made by me.  However, I did have a pretty great loaner to show off.  This is Teresa Buzzell's brand new Jennifer Kistler saddle. 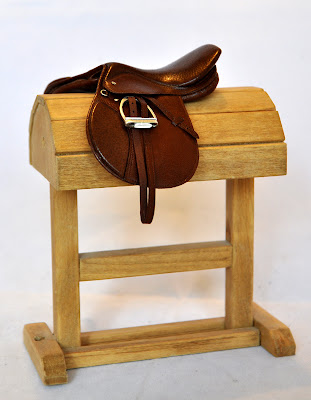 Sigh.  So many beautiful things and such a wonderful day!  Thanks for coming, Sue.  I can't wait to do it again!
Posted by Braymere at 11:48 AM