The Thoroughbred class was one of the feasts, both in quantity and quality.  The judging table was covered in horses sculpted and painted by the incomparable Carol Williams, including  this lovely bay Valor who was the eventual class winner. 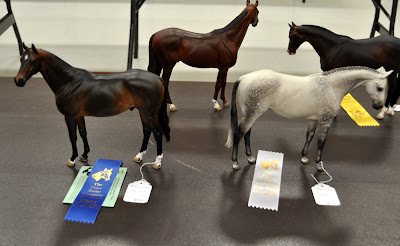 Second place honors went to Dayle Steinke's Seattle Slew who was, I think, the only non-Williams sculpt to bring home a ribbon.  He is shown next to Dayle's other Thoroughbred, a Venator that was painted and sculpted by Carol.

My Victrix, Hummingbreeze, who was painted mostly by me picked up the third place ribbon, but my Valor not place at all.  I kind of hate it when that happens! 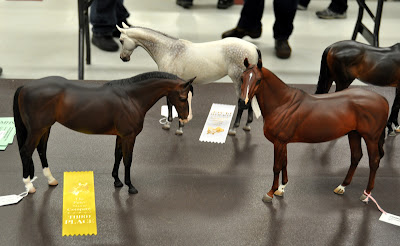 The Warmblood class--which is usually well attended--had just three horses and they were all Eberls.  Val McEntee's big Trakehner was the winner, placing ahead of my Valentino... 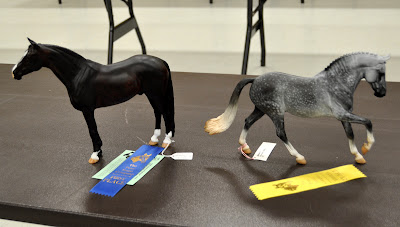 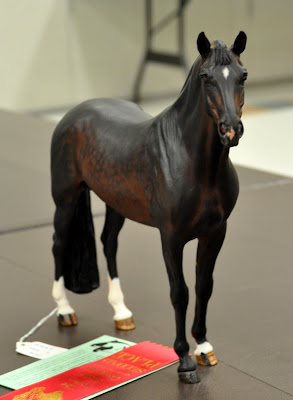 Akhal Teke/Nez Perce was also a three horse class, and all three of those horses belonged to me.  That's Zefyrr with the blue, Frank with the red and Alyosha with the yellow.

The Other Pure/Mixed Sport Horse was another feast. 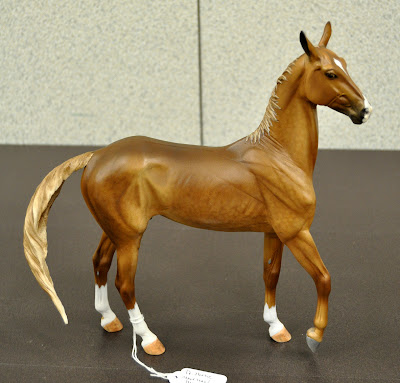 There were several beautiful new-to-Colorado faces on the table... 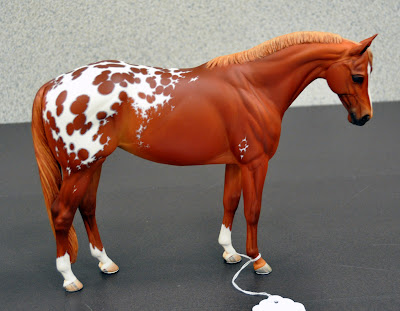 but it was Brenda Metcalf's Grand Design who made the biggest impression. 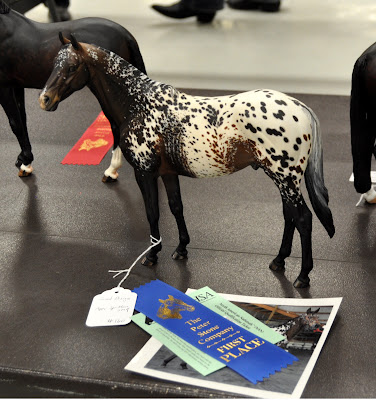 Grand Design is a Carol Williams Valor painted by Karen Beeson.  I've had the pleasure of seeing him before... 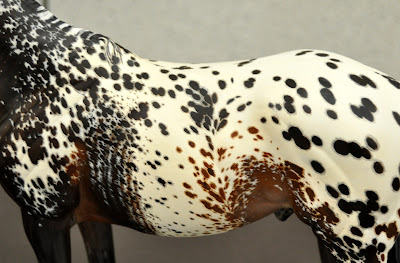 but he is no less mesmerizing upon repeated viewings. 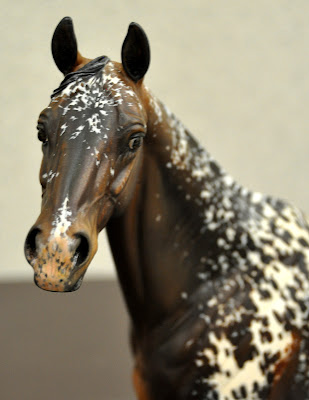 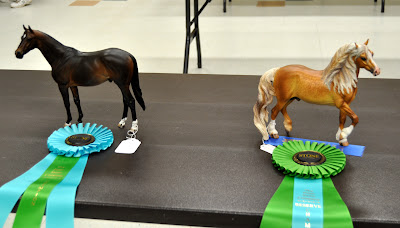 Stock Horses were next, and right from the beginning it was obvious that the pendulum had swung back to famine.  This was the entire Quarter Horse class. 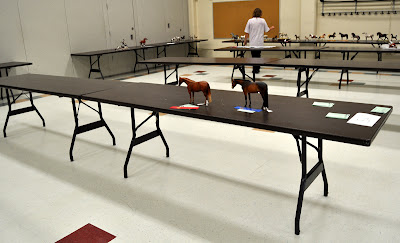 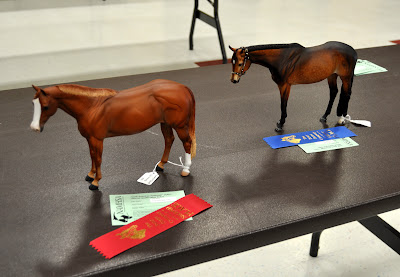 The Paint class was small, but not that small. 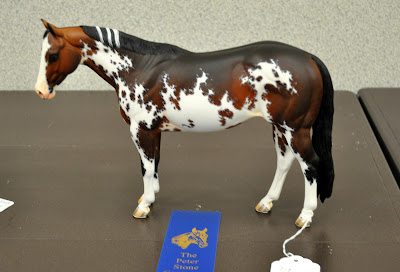 Top honors went to Brenda's lovely Matriarch that was sculpted and painted by Carol Williams. 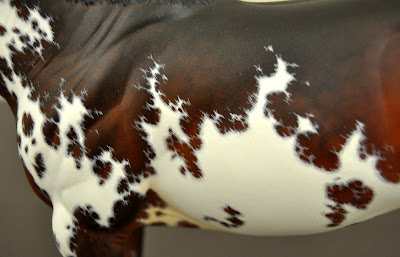 My own Glambert was second.  This guy usually places behind the Lone Stars (mine and Val's) so it was nice to see him claim a NAN card for a change. 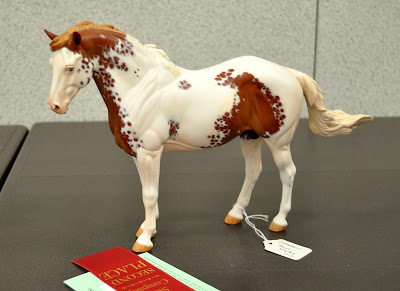 The Appaloosa class was won by Surprise, an Eberl Carlito painted by Sheila Bishop and owned by Teresa Fedak.  Brenda Metcalf's customized Ravenhill Revisited place second.  He is yet another one of her amazing Carol Williams pieces. 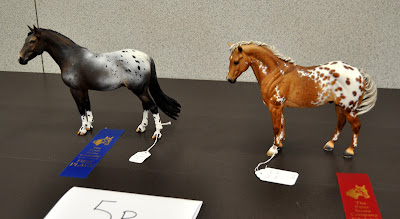 Coloradans like their Mustangs and this class is usually huge...  Not this time!

My Caldero by Kate Schick benefited from the smaller class size.  Like Glambert, he generally places in the middle of the pack.  It was nice to see him step up and do a bit better this time! 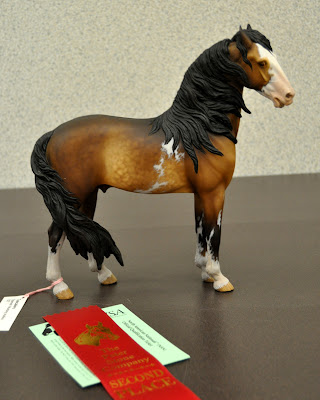 The division ended with the Other Pure/Mixed Stock class.  Prodigal Daughter placed second in that one. 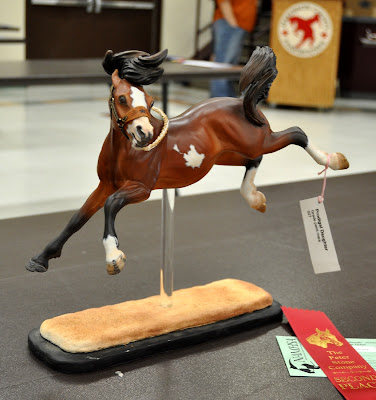 I don't think I've ever had this many horses on the table for a resin halter Stock Breed Division callback.  Woo hoo!  Don't they look pretty?

In the end, however, Champion and Reserve honors went to a pair of horses on the non-Buxton side of the table. 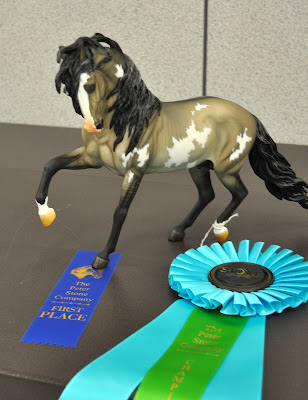 Both these models are owned by Teresa Fedak.  I don't know the particulars on the Mustang, but the Appaloosa is a Sencillo resin sculpted by Jennifer Scott and painted by Sheila Bishop. 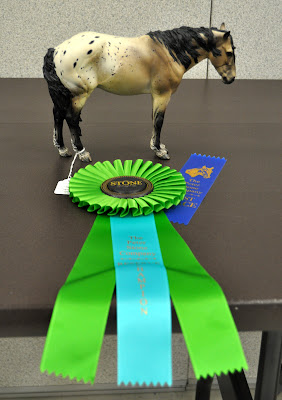 Drafts, ponies and foals are next!
Posted by Braymere at 10:42 AM