Painting a decorator with Stormy Strike

Every finishwork tutorial I have ever published has been written for people who want to paint a realistic model horse. However, a lot of NaMoPaiMo participants are more interested in fantasy colors and decorators. This includes Jillian Morrell, who is better known as Stormy Strike. This year, she painted a Disney themed decorator and documented the process on her Instagram account. Thank you, Jillian, for allowing me to share your words and photos here!

Last year I shared my NaMoPaiMo journey in a YouTube video. This year I’ll be sharing my progress and methods in words and photos. 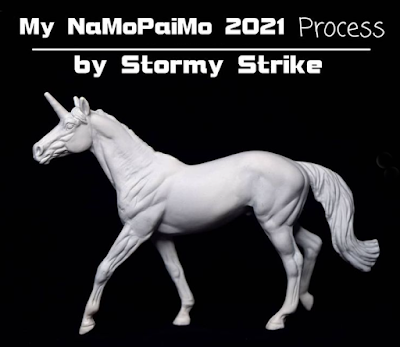 When doing decorators, before I can even consider painting, I need to plan out my design. It starts with an idea and picking a mold that will suit it. I really wanted to do a Disneyland inspired horse because I miss going there so much! My original idea was to do a Traditional Scale model with all my favorite attractions on it, but after sketching it out, I realized that idea was too ambitious. Therefore, I scaled it down to just one attraction on a Stablemate model – Space Mountain on a Walking Thoroughbred Unicorn.!
Then comes references! The more references, the better! I can easily spend an hour just gathering various references for both, well, reference and inspiration. Here I’ve gathered over fifty different images. 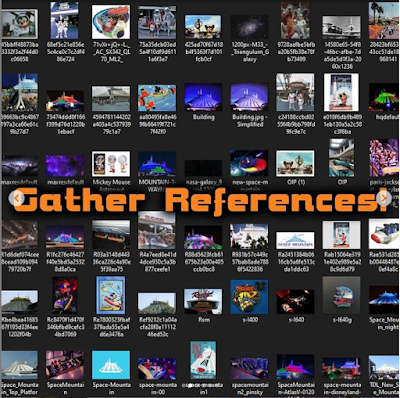 The next step is planning it out. For this project, I took photos of the mold I’m using from IdentifyYourBreyer and some of my reference photos to begin building the idea up in Photoshop. I found this to be incredibly helpful for this particular idea because finding the right placement for each element can be tricky. For example, I tried placing Space Mountain on various spots on the model, but found the only place it looked right was on his haunches. 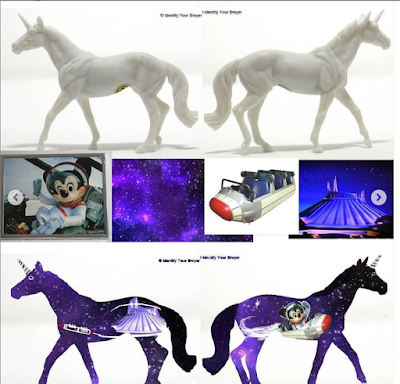 Next I played around with color. The great thing about working digitally is you can quickly change and adjust the colors of your images and play around with the color scheme. In these images, I was deciding between a predominately purple or blue starry sky and between the classic red Space Mountain vehicles or their modern orange. 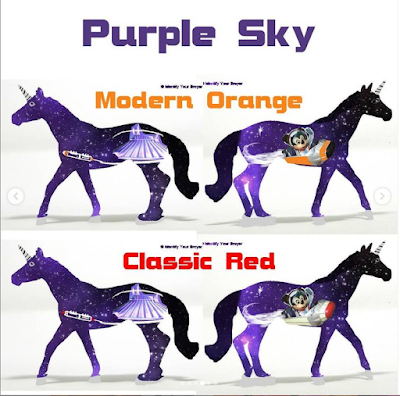 Once I settled on the design and color scheme, the next step was to sketch it out on the model! 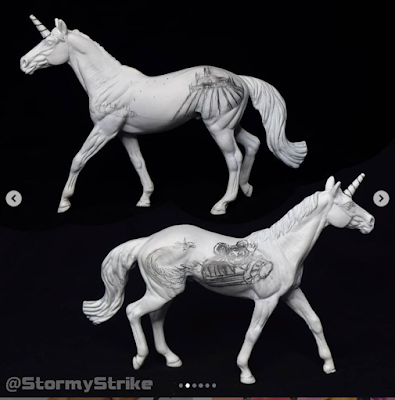 I originally thought I was going to work from light to dark for the galaxy coat, but after some color testing I discovered I like the look of using a dark base instead. I painted the majority of the model black and added a little silver to the hooves, horn, and eyes. 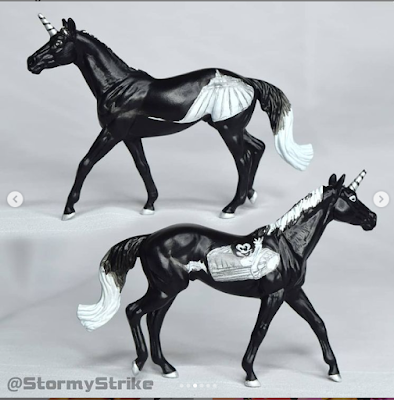 Next, I dry brushed dark blue metallic paint over the model. I really love the effect this creates, because dry brushing also keeps the muscle details of the model dark. 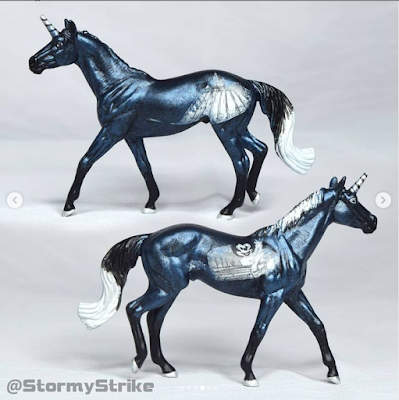 I did dry brushing again with a lighter metallic blue and also a metallic pearl in different areas to create variation in the color, giving it that more galaxy look. For the stars, I splattered the majority on with a paint brush using the metallic pearl paint. For the bigger stars, I added a “glow” around them and a dab of solid white in the center. 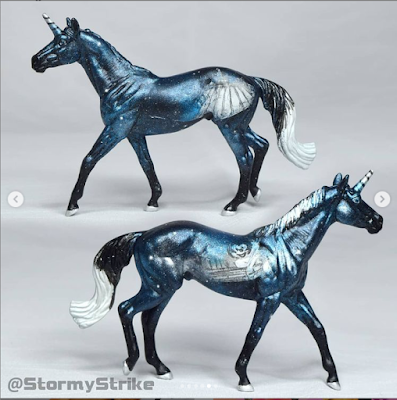 At this point, the galaxy sky part of the model was pretty much done, and I can start working on the details! 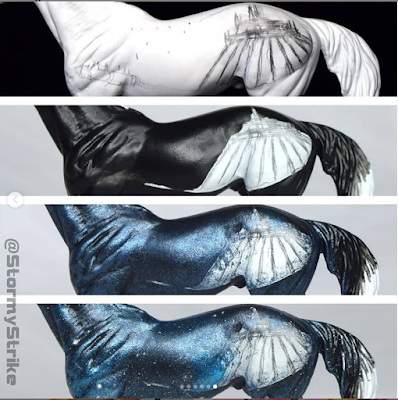 But first, a few touch ups. I added black to the legs, muzzle, mane, and part of the tail and silver to the eye and horn. Some layers of orange and black paint were put down on Mickey and his spaceship. 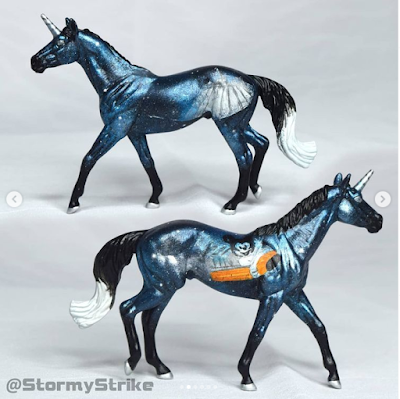 Next Space Mountain got painted! This part was challenging to get the right shapes and shading, but I’m pleased with how it came out. I also painted in the shape of the little spaceship. I found some glitter paint I forgot I had and said, “Everything could use more glitter!” I added that to the outer space parts of the model to give it some extra star-twinkling goodness. 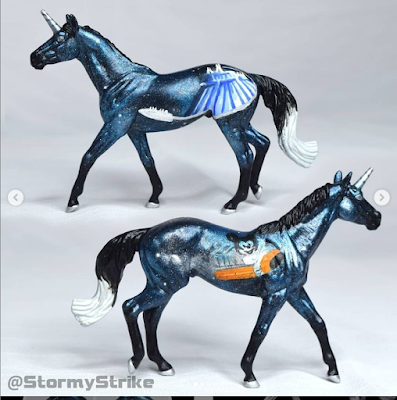 I thought the blue shading on Space Mountain was too saturated, so I toned it down using thin layers of watered-down gray. I got the majority of the little spaceship painted, and for Mickey’s spaceship, I added more layers of orange and grey. The eyes were finished with silver and black. 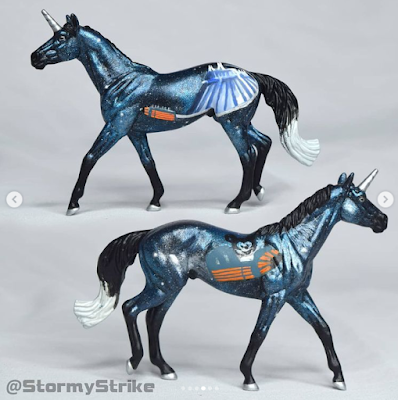 Lastly, I finished the little spaceship and added some extra white and pearl behind it to look like it’s blasting off . On the other side, I finished Mickey’s spaceship and Mickey! I'm very happy with how both of these turned out. Lots of itty-bit details really helped bring it to life, from adding shading and highlights to the spaceship, to watered-down pink to add a little blush to Mickey’s face. Behind this spaceship, I also added more white and pearl to give it more of a blasting off effect. Finally I painted the black line on the horn, black on the rest of the tail, and topped it off with a satin finish! 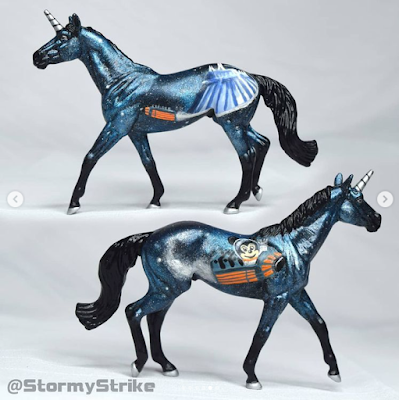 Here's a little college of all the progress pics together. 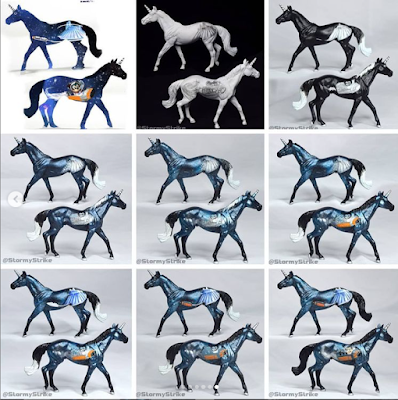 Here is my finished horse. 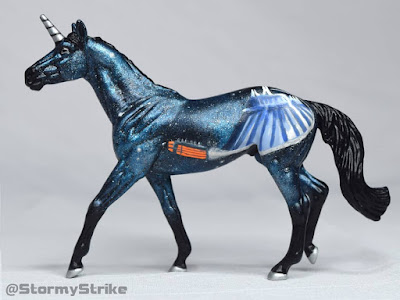 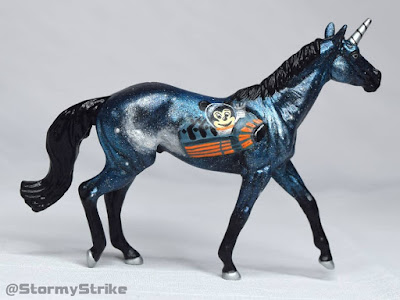 This is my second NaMoPaiMo model, and the first to be completed on time! I'm very happy with him and this experience has given me confidence to be able to paint more tiny details in the future!
Posted by Braymere at 4:44 PM