The ears have it

One of the best indicators that my Arts and Crap Day extravaganza was a big success is that one of the participants was inspired to go home and write a (completely unsolicited) guest blogger post about her experience.  Here it is:

The Ears Have It

Jennifer made a comment a while ago that she dislikes making headgear for the Strapless model, because she has "funny" ears.  I have one that I am customizing, and I want to show it in performance, so I wanted to address this problem before I ask Jennifer to make a bridle for him.

In conjunction with the recent Arts and Crap event, I commented that I was going to need help with lots of ears for various models in progress, because I was feeling lost.  Since it was FAR too hot to go look at a live horse, Jennifer asked me what sculptors did nice ears.  We looked at each other and almost simultaneously agreed that Carol Williams was going to win that competition!  Thankfully, Jennifer was willing to go pull Validator... 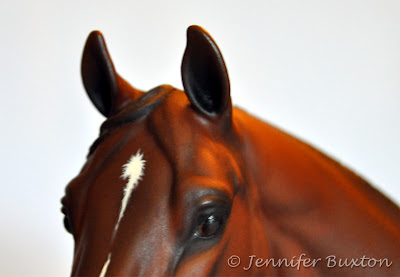 and Rune (who also has nice ears) out to use as references. 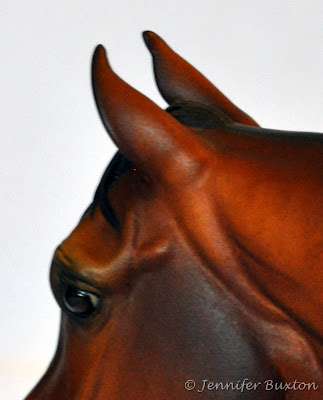 Here are Strapless ears in their (repainted but uncustomized) state.  The right ear isn't too terrible... 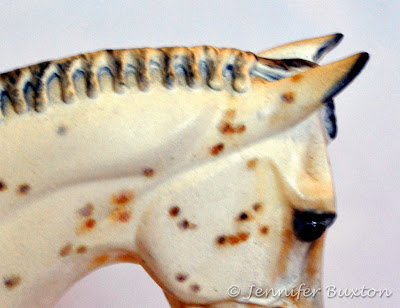 but the left ear has all sorts of issues. 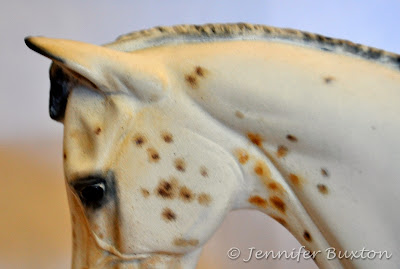 The most serious of which is that the ear bulbs are much too long and interfere with head gear.  So under Jennifer's old style ministrations (Xacto knife and sandpaper) my CM Strapless now has ears that look like this: 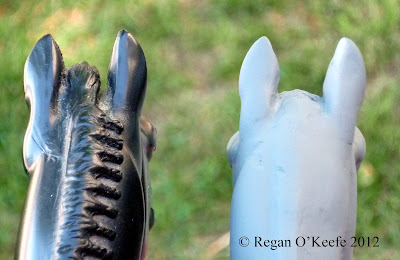 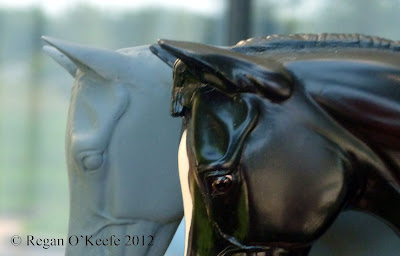 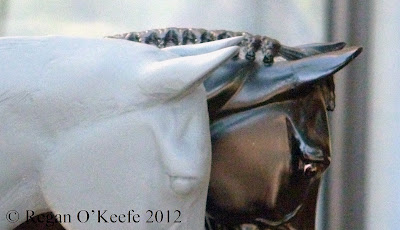 I also worked on other ears.  This Eberl Puro Oro had his forelock sanded off, and his ears looked a bit spindly afterward so I beefed them up and feel they came out beautifully. 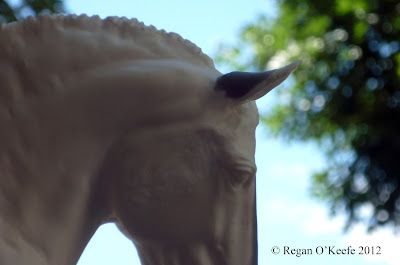 I am shortening the mane on my Arista resin to a pulled length.  Her ears needed some serious refining and reworking after that.  I think I am the most proud of her left ear: 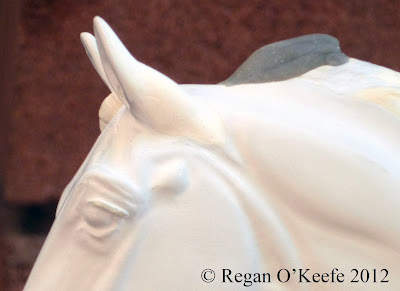 I also think the right ear came out well, though I had to add epoxy for shaping after taking off the forelock. 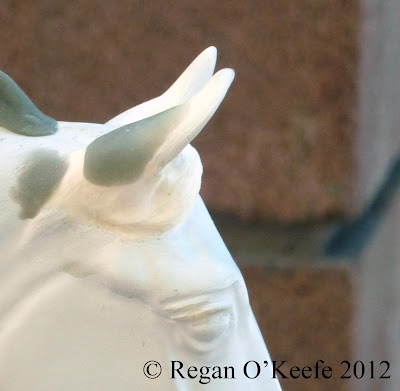 Don't forget to look at the sculpting from multiple angles, including behind! 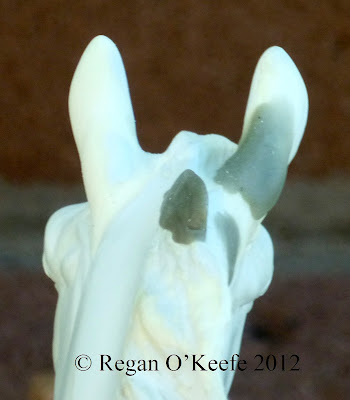 During Arts and Crap, Jennifer demonstrated how to make ears, using a technique from Laura Skillern's blog.  I shaped it to match the unbroken ear on my Vega resin.  Sadly, I had dropped him and his ear became badly mangled. (If you've ever seen a dog after hematoma surgery, or a cat after frostbite, it looked like that.)  Because it wasn't a perfect match, we decided to keep the replacement ear in the "listening to the rider" position, although tit would have been easy to reposition it.
I used a dremel to cut off the useless ear and then a different tip to hollow out the place where the ear would go.  Then we positioned the ear in a pleasing position, and Jennifer used super glue and baking soda to hold it into place.  (I am much better at holding things than using super glue under any circumstances.)  Later epoxy was added for final strengthening.  The finished product looks good: 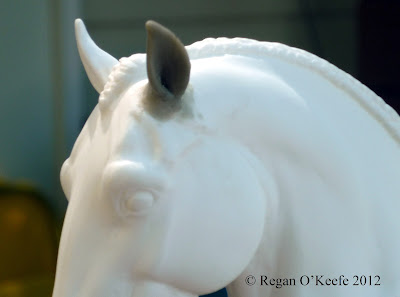 Jennifer and I have a long history of working on each other's horses, so I used a bit of putty to fix the ear on her Babette since just the tip was broken.  Thankfully we didn't have to try to rebuild an ear around all that hair. 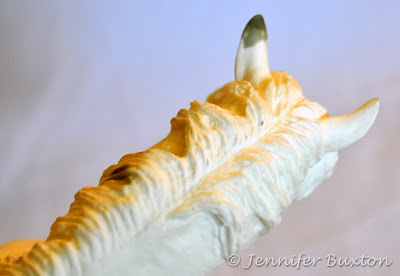 Thanks, Regan!  You are welcome to bring your big box of projects and tools to my house anytime!
Posted by Braymere at 3:44 PM