Today is Day four of the Buxton family plumbing crisis and the end is still not in sight. Once again I have my hands full with non-tack issues, so I am very grateful to my friend Erin Corbett for providing today's post.

Erin is a top notch Western saddlemaker who recently moved from Portland, Oregon to Leeuwarden, The Netherlands . This is an account of her first European live show.

Morsbach Live Show, Germany by Erin Corbett
I thought you guys might be interested in my stories/photos from my first live show I went to this weekend, in Morsbach Germany! 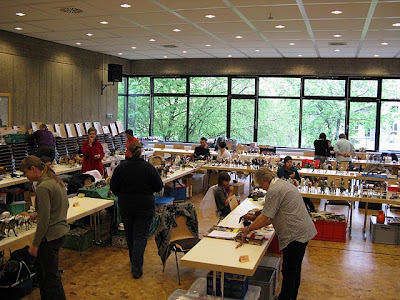 I have to start off by saying that this isn’t meant to be any judgments about which is better or worse, shows in Europe or in the US. They are just very very different, and of course the differences really stand out to me as a newcomer who has shown for so long in the US.
The class list is different, instead of many breed classes there are just a handful. It’s pretty flexible about what class your horse goes in – for example, there was no Morgan or Other Light class, so my Knightly Cadence that I show as a Morab went in with the Arabians. There is not a workmanship division, so just ‘halter’ so to speak. The same goes for OFs. You also don’t assign specific breeds to your horses, unless there’s a really strong reason to say what you’re calling your horse. For example, my Vertical Limit goes in the Warmblood class, but I don’t say what sort of warmblood I call him. The only horse that I listed a breed for the whole day was my Cadence, because that mold is a morgan mold, but I had him in with the Arabians like I said above. 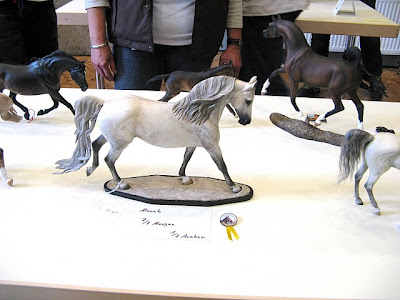 For performance, there was a “performance” section and a “tack” section. The former is closest to what we have in the US for performance, except with a much more limited class list. This weekend there was one class for Western and one for English, for example. In these classes it’s not a good idea to enter something like western pleasure – they really want to see something more involved. I did two western trail entries, and then jumping for English. 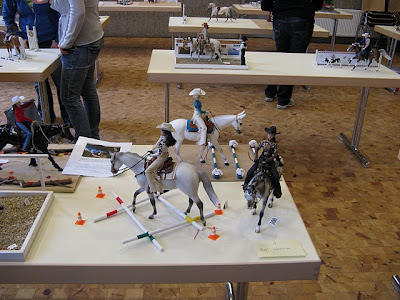 The tack classes are just what they sound like – you just put your tacked up horse on the table, and it’s judged on the quality of the tack. Fit and adjustment don’t count at all in these classes, you can just drape the reins across the saddle and you’re good to go. 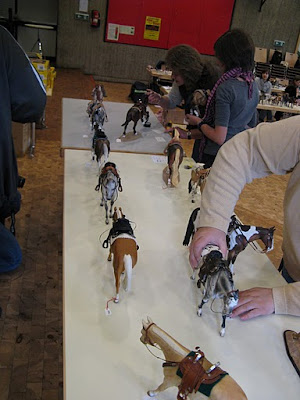 I learned that for most shows in Germany, there are no assigned judges, the entrants do it all. When you enter you submit a list of the horses you are planning to show, with a listing of the classes they will go in. Then when you get to the show, you are given a paper with the classes you will judge that day, determined by what you’re not showing in.
The championships are done similarly – when you enter you get an envelope of tickets. For each championship, all of the entrants go around the tables and place their ticket next to the entry they think should win, and the horse with the most votes is Champ, second is Reserve. If there’s a tie, the voting is re-done with a show of hands. 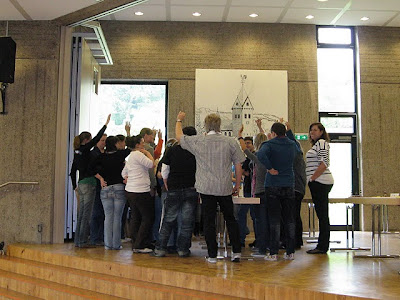 The ribbon colors are also new – first is gold or yellow, second is silver or grey, third is copper or red or something similar, and then the others change from show to show. For this show, they were as follows:
First: Yellow
Second: Gray
Third: Red
Fourth: Blue
Fifth: Green 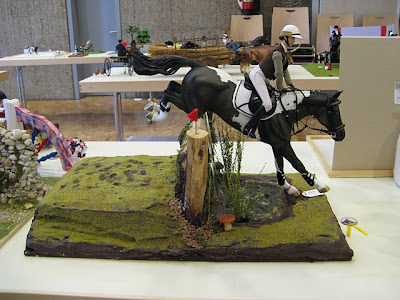 I also got a kick out of the different ways things are pronounced. For example, the ISH isn’t “ish” like most Americans say, it’s the “ee-ess-ha”. Resins are raisins, which I LOVE. I’m going to tell everybody I collect $300 raisins from here on out. OFs are “offs”. I think my favorite new way of saying a name is Matriarch. In German she is “mah-tree-arsh”, with the r rolled of course. So pretty!
Now that the ‘what’s different’ is out of the way, I’ll talk a little about how I did! I was really quite nervous going into this show, being a foreigner and totally new to everything here I didn’t know how I or my horses would be received. As it turns out, my fears were completely not justified! Everybody was really friendly and very complimentary about my horses – sometimes in English, and sometimes in German and translated by Melanie. I won a bunch of classes, including the Western performance class that was really big! That win was HUGE for me, since it was of course using tack I made. That entry went on to be Reserve Champ Performance! 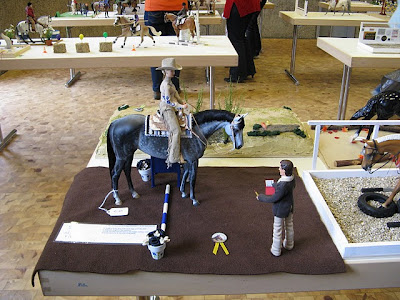 Tahtib, my mini Nahar by Mel Miller was first in Arabians and then Overall Champ Mini Resin as well. Having the champs done by popular vote almost made them more exiting to win – you know it’s not just one person that likes your entry; it’s the majority of the entrants! 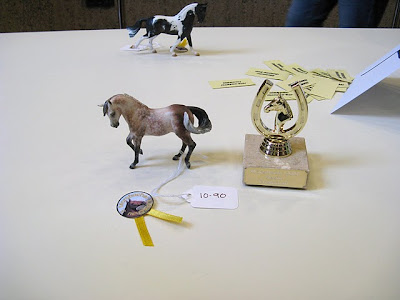 I gave out my e-mail address and website many times for people interested in ordering saddles, which really made my day. To have my work so well received in a new country is like a dream come true.

All in all, the show was fantastic. There’s another one in June I hope to get to, and then the big ‘Breyerfest’ show in August that I am already entered for. Showing models has been such a big part of my life for so many years that it’s a great relief to have been to a show in Europe and know that they are going to be every bit as enjoyable as they were in the states - at least if the rest in Germany and in Holland are anything like this one was!

Of course none of this would have been possible without Melanie Knuttel. She invited me to stay at her home and go with her to this show, and was my super awesome interpreter for the day! I had SO much fun discussing everything from resins to politics to health care to history with her, and cannot wait to do it again! I am SO thankful for all of her help with interpreting the show information, helping me get my horses in the right classes, and just generally minimizing my opportunities to make a fool of myself.

Thanks again, Erin for allowing me to repost this. If you would like to see more pictures of Erin's tack, please check out her website at: http://everafterstables.homestead.com/.