Yesterday I attended the Devilish Kokopelli Live Show. This is a large, multi division show held each year at the Jefferson County Fairgrounds in Golden, Colorado. I look forward to this show all year long, largely because it features an extensive performance class list.

This year, however, I almost didn't show performance. I've had so much going on in my life that I just haven't had the time or energy to think about my set-ups. I was ready to call it quits before I even started, but then at the last minute, I had a change of heart. It occurred to me that half-assed performance set-ups might be kind of fun, particularly since the model I decided to show was, in fact, half ass.

I tentatively planned to show my mule Balthazar in a few classes in each division. Things did not get off to a good start when we completely missed the Parade class because I'd left the cinch at home. My redeemed ourselves, however by winning the Other Performance class with this scaled down Endurance entry. 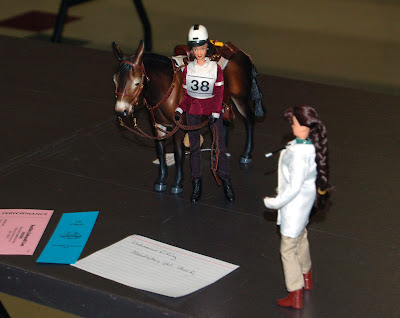 The half-assed quality of my performance efforts continued into the Scene class. In the past, I've shown this with Balthazar tied to a hitching post. This time, however, I forgot to bring the hitching post, and I had to ad lib. Still, it was good enough for second. Good thing the judge didn't count off for dust! 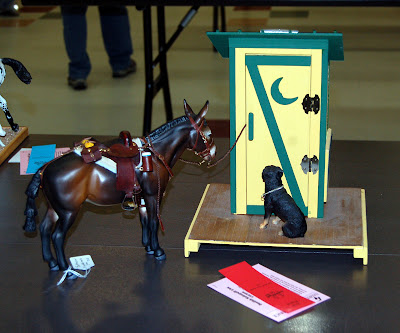 Two good ribbons in two classes were enough to make Balthazar Reserve Champion of the Other Performance division. Yay, Balthazar! The English division was next. I skipped the first four classes (Cross Country, Jumper, Hunter and Saddleseat). Balthazar is not a saddleseat mount, and although there are ways to use a standing model in the over fences classes, I don't find any of them to be particularly pleasing. I really don't like setting up class filler, so I waited things out until the Huntseat Pleasure class.
Balthazar was the only standing model in this class, which can be a disadvantage. He was also, however, the only model with a doll. A well dressed doll that is properly positioned can be a huge asset. My rider doll was dressed by Sheri Wirtz with field boots by Corinne Ensor. She is absolutely top of the line and I give her most of the credit for this blue ribbon. 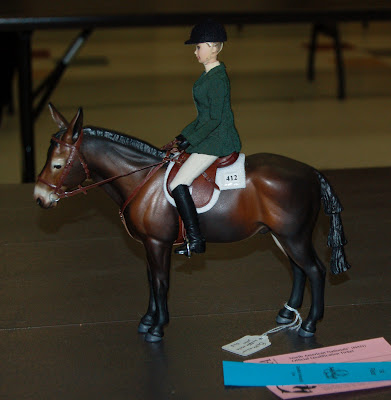 English Trail was next. Balthazar came in second. 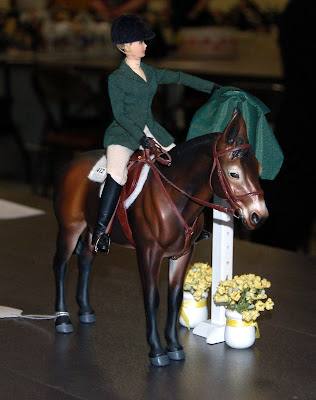 I didn't have anything prepared for the Other English class, so I asked my friend Teresa for help. She immediately set me up with this card... 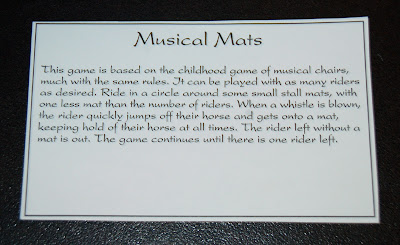 and the matching prop. Another winner--thanks Teresa! 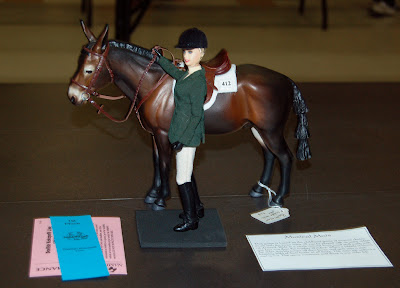 Dressage was the last class in the English division, and Balthazar continued his winning ways with this training level set-up. Go mule! 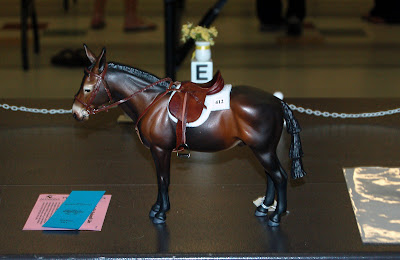 We ended up skipping the Western division entirely. I took one look at the horses in the first class and knew we would be completely outclassed. Like I said before, I don't like setting up class filler. I decided my time would be better spent taking pictures and talking with friends.
Here's Balthazar again with his winnings for the day. It wasn't quite enough to earn him an Overall title, but still... Six NAN cards in six classes is pretty impressive. 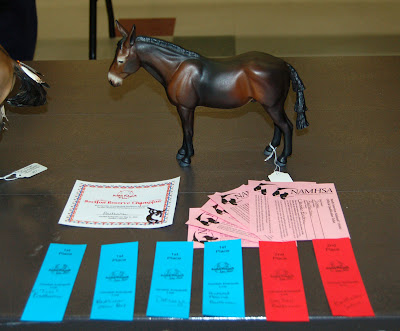 Maybe it wasn't such a half-assed performance after all!