Never have I ever

Hardly a week goes by without some kind of equestrian Never Have I Ever quiz crossing my Facebook news feed. Most of them are pretty silly, but I always take a moment and count up my points anyway. Today, I am going a step further and posting the whole thing here. Sorry/not sorry.

Give yourself one point for each of these you HAVE done.

1. Ridden in a country other than my native country. When I was ten my family vacationed in Baja California and I got to ride twice. This is my sister and me on the beach with our skinny rental horses. 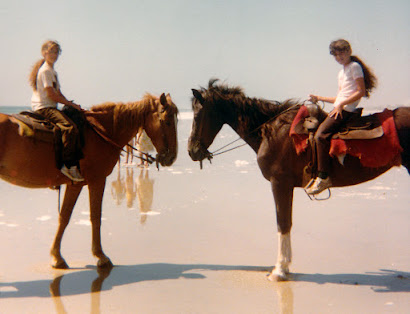 It was thirty years until my next non-United States ride, but last December, I rode a Polish Warmblood named Tornado in Germany... 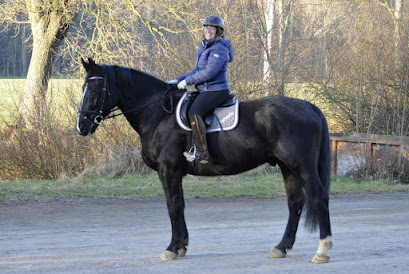 and in January, I rode a Dutch Warmblood called Identity on the beach in the Netherlands. I definitely get a point for this one! 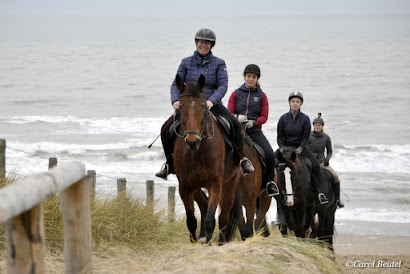 2. Ridden an Appaloosa. Old fashioned Appaloosas, with their rat tails and quirky personalities, were a staple of my early riding career. This one was a Prince Plaudit grandson name Chipper that I rode on and off for several years during my late teens and early twenties. That's another point for me! 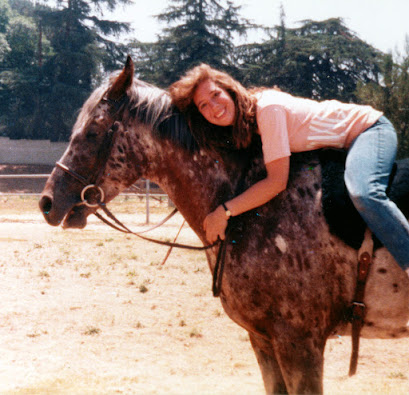 3. Ridden a five gaited horse (walk-trot-canter-slow gait-rack). It turns out that Mozelle racks, and I have ridden her, but it was a pony ride. We didn't even trot, so no points for this one. 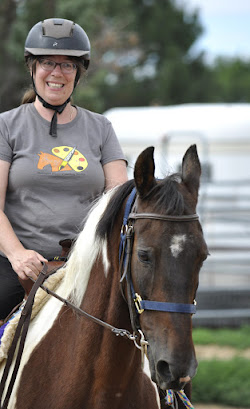 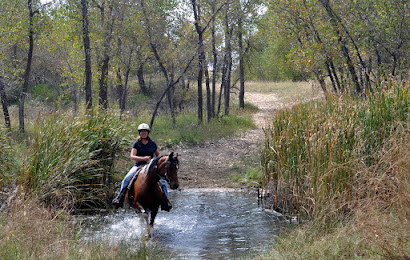 5. Ridden to school. No.
6. Ridden through a McDonalds (or other) fast food drive through. Technically I have not, but when Laura and I had all the camp ponies at Siason, we used to ride down to 7-11 and buy Slurpees. Usually, she'd do the purchasing, and I'd stay outside with both horses. I feel like that's worth half a point.
7. Ridden in shorts, barefoot. I spent four summers working on the horse staff of a camp that didn't own any saddles. Everyone rode in shorts and tennis shoes, including me. The barefoot thing only happened once or twice,  mostly when we took the horses swimming. That's another point. 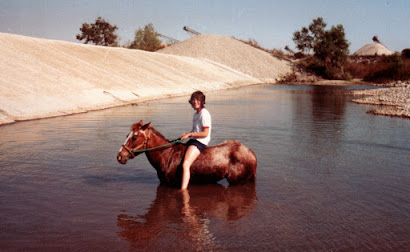 8. Ridden with a family member. When I met Seth, he had never sat on a horse. Naturally, I fixed that right away. 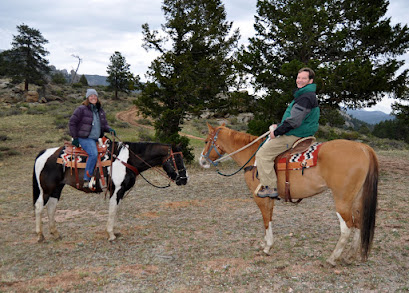 I also made sure that my kids weren't similarly disadvantaged. They've ridden with me more times than they probably ever wanted to. I'm now up to five and a half points. 9. Ridden a Connemara. Sadly, no.
10. Ridden on an actual race track. Another no, but I have stood on one. 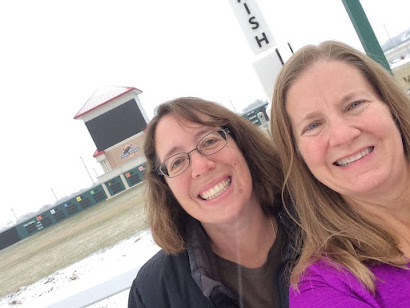 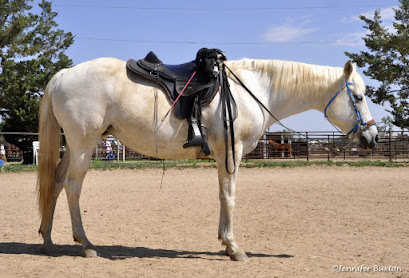 including today. Six and a half points. 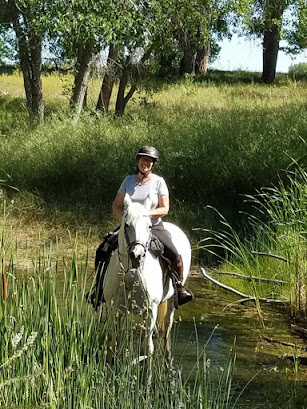 12. Ridden a Morgan. I've ridden several Morgans, but I think Mikey is the only one with photographic proof. Seven and a half points. 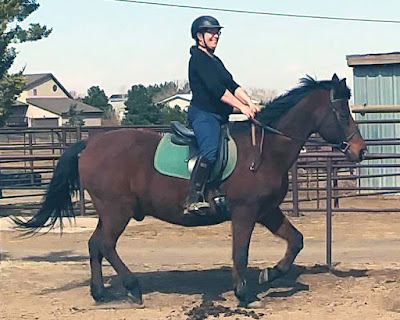 13. Ridden a Holsteiner. Okay, this is tricky. I rode a lot of warmbloods in the 1990's, but most of the time I didn't know exactly which flavor of warmblood they were. I don't think any of them were Holsteiners, except perhaps the gelding I rode in the woods while visiting Trisha at Jessica Ransehousen's barn in Unionville, Pennsylvania. He was a big, heavy bodied chestnut with a lot of chrome, and I kind of remember him being a Holsteiner. Maybe. I don't remember his name and I don't have a photo so here's one of Jessica's 1988 Olympic dressage mount, Orpheus, that I took on that same trip. I'm awarding myself another half point for this one, so now my total is eight. 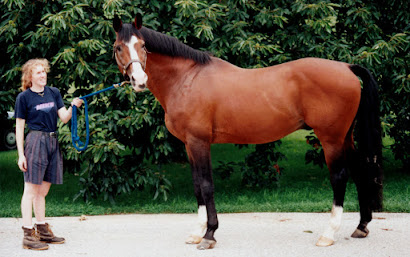 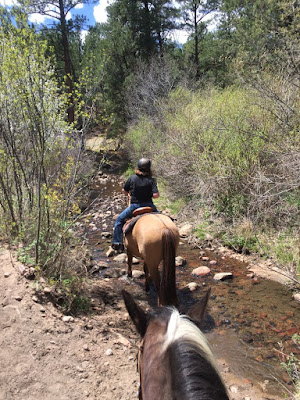 15. Ridden a Trakhener. When I think about Trakehners, my mind immediately goes to the famous 1980's show jumper, Abdullah. He was a World Cup champion, a double Olympic medalist and a Breyer horse. Obviously, I never rode Abdullah, but I did ride one of his sons numerous times in the '90's. I can't be certain that E Street was registered as a Trakehner, but I'm going to give myself this point anyway. My current total is ten.
16. Ridden as an extra in a movie. The first time I ever rode Santana was in front of a film crew. Eleven points. 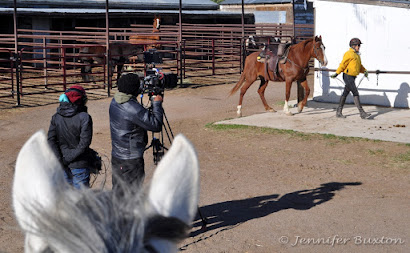 17. Ridden to escape a posse & 18. Ridden as a member of a posse. These questions are silly. How many people in this day and age have been involved in mounted posses?
19. Ridden while totally lost. When I was twenty I worked at a guest ranch that was completely surrounded by National Forest land. Our trails were far ranging and barely marked, and I spent most of May and June utterly and completely lost. Multiple times I took a group of guests straight up a mountain in hopes that I would be able to see the ranch from the top, and thus find my way home. It was every bit as horrifying as it sounds. 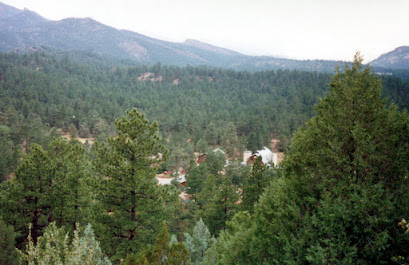 On the plus side, by the end of the summer, I almost couldn't get lost. Whew and twelve points. 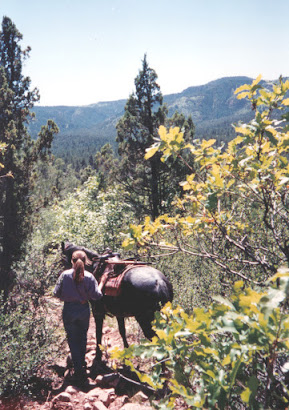 20. Ridden at least 6 different horses on the same day. I have done this, but not for thirty years. Occasionally I ride two horses in one day now, and that's more than enough for me. Thirteen points. 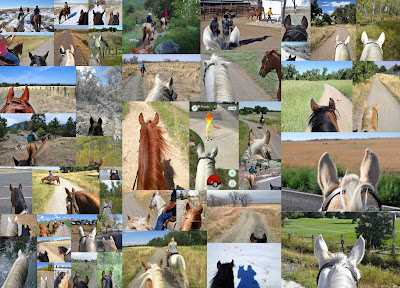 21. Ridden in a team penning competition. I've never had an opportunity to work cattle in any kind of official way. Hopefully someday!

My score for this round of Never Have I Ever is thirteen out of twenty, which works out to about sixty two percent. That's not very good. It looks like I need to find a Connemara to ride to school and on a race track. After that, I'm going to borrow a five gaited Saddlebred and simultaneously join and flee from a posse. And pen cattle. Yes, let me get right on that!
Posted by Braymere at 5:20 PM