Today's prompt for the May Shelter & Share Photo Challenge is "Favorite portrait model." This is a prompt that is near and dear to my heart because I love portrait models. In fact, I love them so much I've already used all but one of mine in challenge photos. I guess that makes Navah Joe my favorite, at least for today. 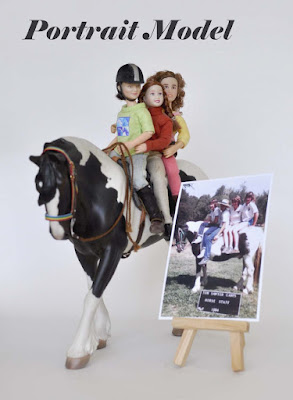 Navah Joe is a Renate Van Der Graaff RB Romke resin that was customized and painted to look like Tom Sawyer Day Camp's gentle giant - in girth, rather than height - Navajo. 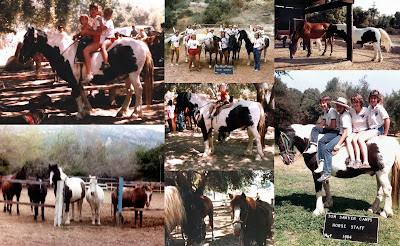 I've already written a couple posts about Navajo, so instead of trotting out the same old photos, I thought it would be fun to share pictures of some of the other Tom Sawyer horses from yesteryear.
I worked on the horse staff at Tom Sawyer Day Camp for four summers, from 1983 to 1986.
I was a junior counselor for the first two years and an assistant counselor for two years after that.
My salary was eighty dollars a week, which wasn't even minimum wage. I didn't care. I loved that job - and those horses - and I would have been happy to do it for free.
The camp owned about twenty five horses and ponies, which were stabled in and around Oak Grove Park (now Hahamongna Watershed Park) in La Canada, California. 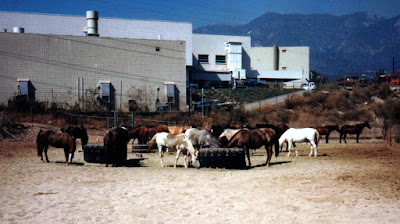 During the school year, most of the horses were leased to campers and other wanna be horse owners in the greater Los Angeles area. It was through one of these ponies that I found my way to Tom Sawyer. Cinnamon had been leased to one of my classmates, who promptly lost interest and gifted her to me. I rode Cinnamon nearly every day for six glorious months, at the end of which I followed her to the camp. Most of my photos of Cinnamon were taken during our time at Eaton Canyon Riding Club, but I do have this one cute picture of her and Navajo standing together on the Tom Sawyer picket line. 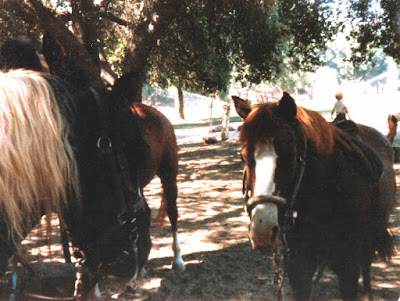 Cinnamon was a nice pony and stayed right at the top of my favorite lists throughout my four years at Tom Sawyer. However, you know me. I can never have just one favorite, so she shared that honor with Snickers. 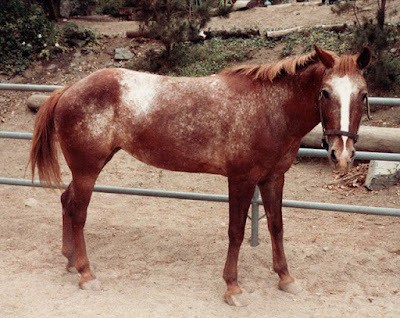 Unlike Cinnamon, Snickers was a bad pony who never got leased during the school year. This was  a good thing - at least for me - since I spent a couple years riding the unleased camp horses during the off season. Most of my pictures of Snickers were taken at Siason or McAllisters. This is one of the only exceptions.
On the hierarchy of Jennifer's favorites, Chief was a close third. Like Snickers, Chief was not an ideal camp horse. He was full of go, so much so that only a few of the bravest campers were allowed to ride him. Mostly, he was reserved for staff.
I took this picture of Chief during a visit to California in the early 1990's. He was quite old by then and his face was very grey. My friend, Laura told me that he had gotten so slow that anyone could ride him, even the five year olds. That made me sad. 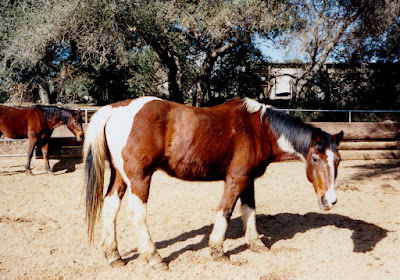 Of course, being slow is actually a good trait in a camp horse. Kiko and Bill were both very slow, very safe and very good camp horses. 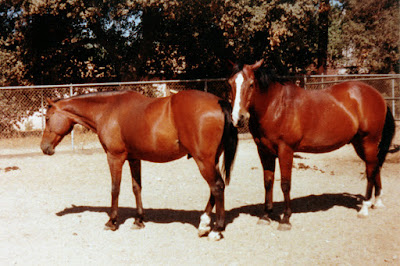 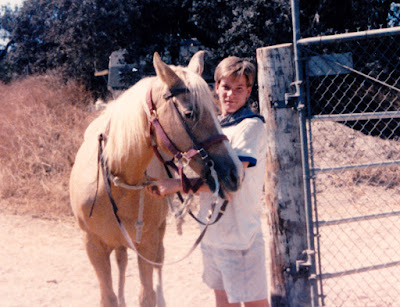 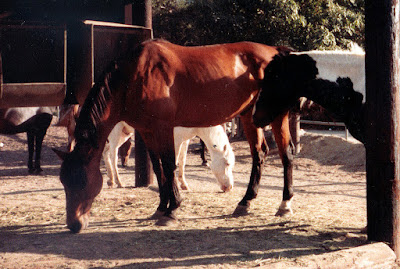 I didn't ride any of these very good camp horses very often, mostly because we needed them for the campers, but also because I thought they were boring. I made an exception for Cowboy because he was trained to rear on command, and I was young and dumb enough to think that was cool. 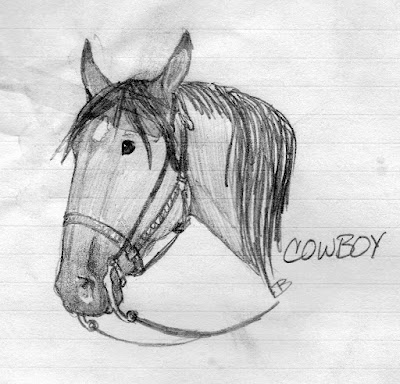 Two of the other slow pokes I made exceptions for were Pat and Sunny. Sunny was the sweetest pony. He ate hot dogs and ice cubes and eventually went completely blind. Pat was not sweet. He was sullen and crafty and unpopular with campers and staff alike. I was the only person who liked him, and I really can't tell you why. I just did.
Other unpopular members of the Tom Sawyer herd included the two "white weirdos," CB...
and Coconut.
These ponies were so unpopular, they were nicknamed "I Don't Know" and "I Don't Care." If a camper answered the "Who would you like to ride?" query with either of those statements, they were stuck with either CB or Coconut. Most didn't make that mistake twice. 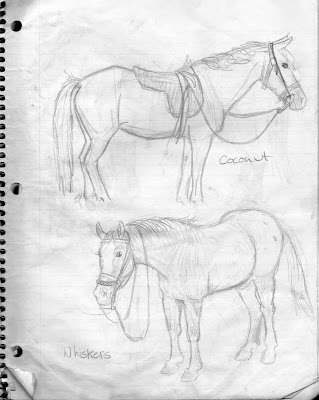 Because the unpopular ponies tended not to get leased, I spent two winters with Pat, and one each with CB and Coconut. I also had some off season time with smart little Ebony, 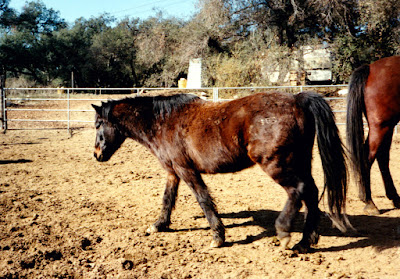 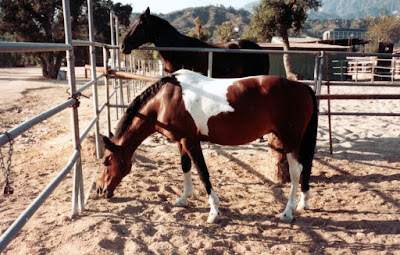 and Frosty, who is the only horse who's ever dumped me twice in one day.
He wasn't mean, but wow, he was quick.
It's been more than thirty years, but all these horses are still alive in my memory. I am thankful for the photos and drawings I have of them, and also my portrait models. I love that Navajo and Snickers reside on my shelf, and someday I hope Cinnamon and Chief will join them someday.
Posted by Braymere at 5:02 PM