Battle of Breeds, part one

As its name implies, Clash of Colors and Battle of Breeds was actually two live shows in one. 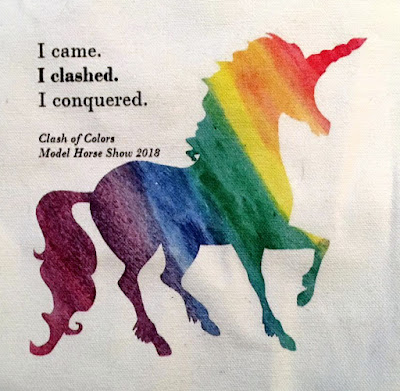 Clash of Colors was an all yellow card halter show featuring ten divisions organized by color. 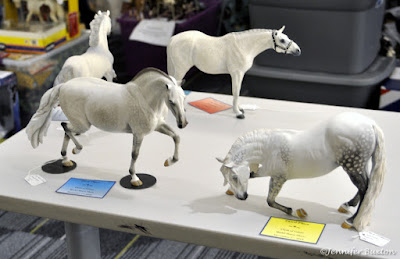 Battle of Breeds was a breed-based performance show, in which entrants were "judged according to realism of breed participation in the selected discipline and accuracy of the discipline/scene portrayed." This was a unique and innovative change from the traditional performance format and made for some really creative and exciting entries. 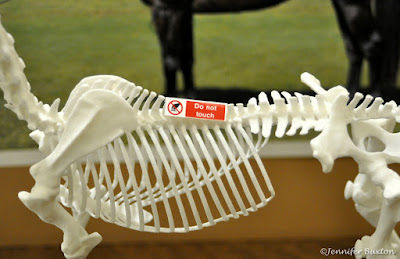 The division started tamely enough with the Light Breeds class. There was an Arabian dressage horse, 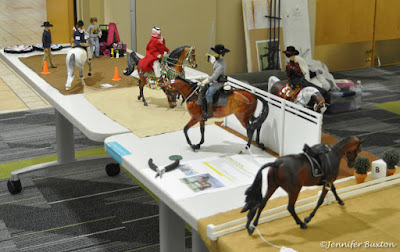 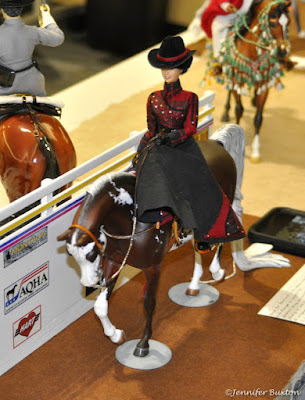 a Morgan in cavalry tack, 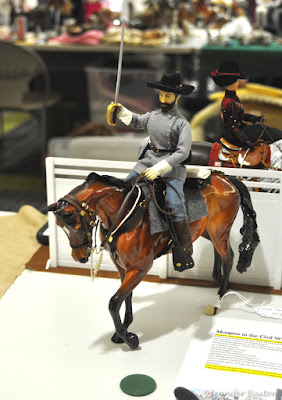 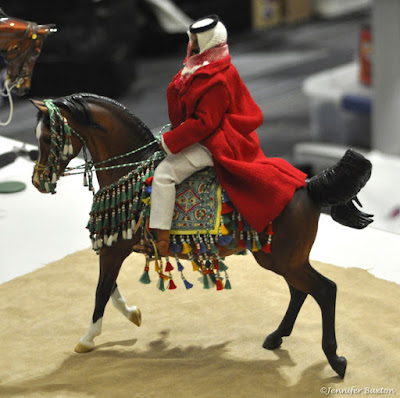 and a half Arabian showing in a Versatility class. This one was mine, and she was the winner. Hurray! 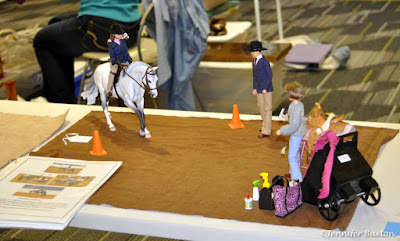 The next class was Spanish breeds. There were only two entries in this one, my own Estudioso... 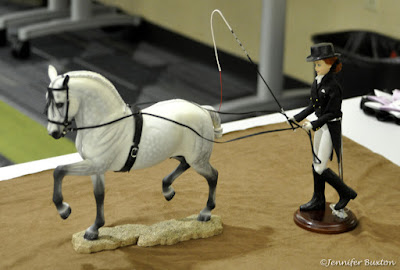 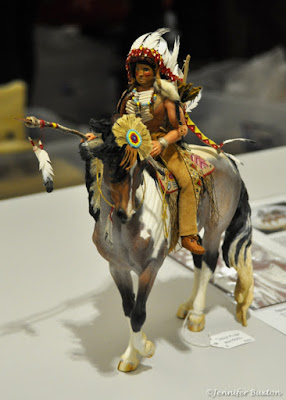 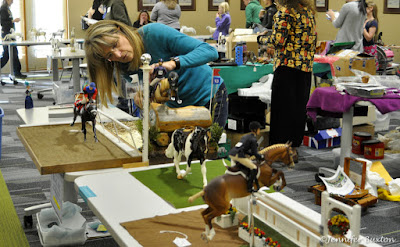 Flying Phoenix was created specifically for this class, and she looked absolutely fabulous in her High Performance Hunter set-up. 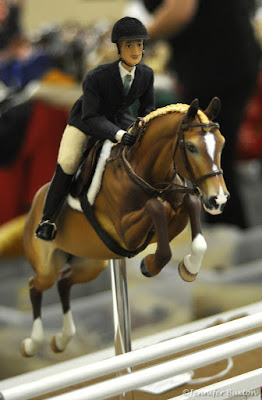 Unfortunately for me, the judge found Sandy's eventer and Karen's circus cob to be just a little more fabulous, and she had to settle for third. Darn! 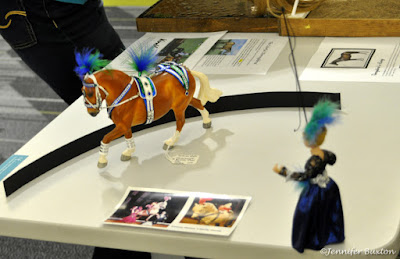 Carriage Breeds was a one horse class, but at least the one horse was a good one. This is Llwynog Copr pulling my Bill Duncan sleigh. 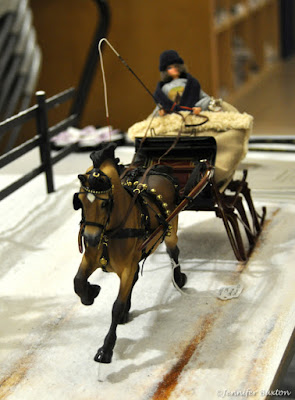 Gaited Breeds was next. I showed Lady Liberty in her "X-rated" (over twenty one) Water Glass class set-up. 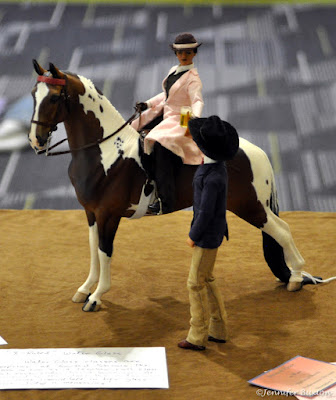 Here's the judge measuring the amount of beer left in her mug. She didn't spill a single drop! 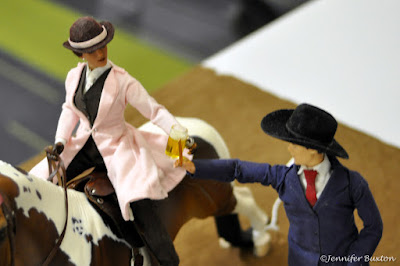 The blue ribbon went to Sandy's parade horse, who was the only other entry in the class. 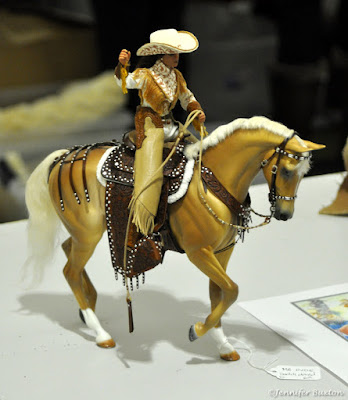 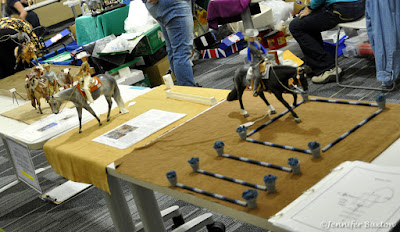 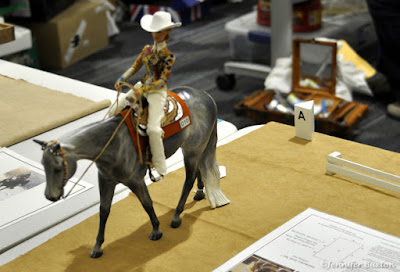 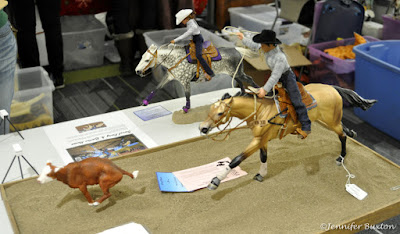 and I had two as well. 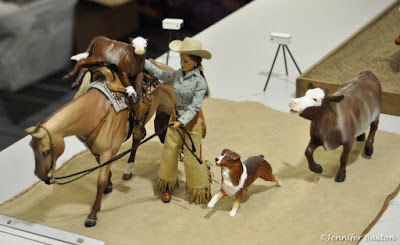 This is Fabian acting as Formal Attire's personal paparazzo. 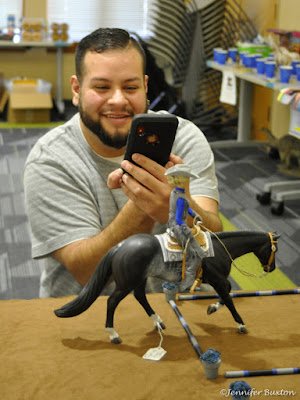 Sandy's buckskin roping horse won the class, and Dun Up Purdy placed second with his working ranch scene. Dun Up Purdy was one of my first serious performance horses, but it's been years since I've shown him. It was really nice to see him out there again! 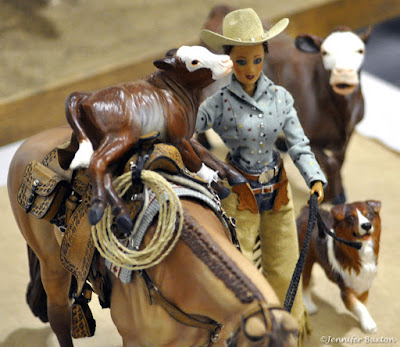 Because Sandy's roper and Dun Up Purdy would eventually be named Overall Champion and Overall Reserve Champion of the Battle of Breeds performance division, it's tempting to say that the Stock Breeds class was the highlight of the performance day. However, in my opinion, this was not actually the case. Sandy and I were just beginning to get rolling, and the best was yet to come.
Posted by Braymere at 10:15 AM