Here are the few performance pictures I took yesterday. I had planned to take more, but I was so busy setting up and taking down performance entries that I really did not have the time. 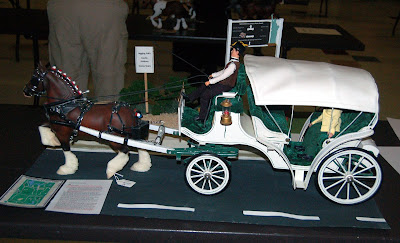 You know I'm all about details, and I love that this harness has a little poop bag for the horse--too funny! 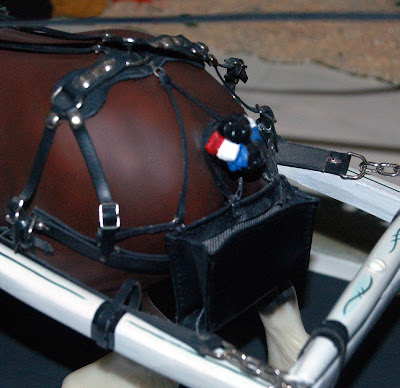 A nice Indian costume of an OF LadyPhase. 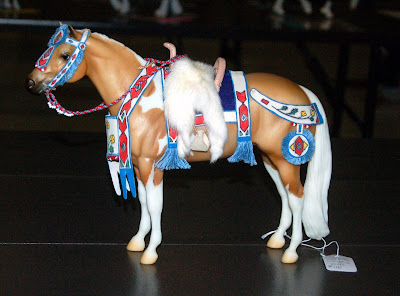 My mule Balthazar won the Other Performance class with this Endurance set up. My vet doll has the incorrect white lab coat--sorry Jackie! 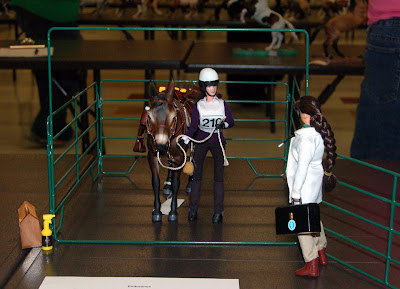 My own Getaway was the English performance champion. That one red ribbon would have been blue had I actually bothered to read my own dressage documentation... Oh well! 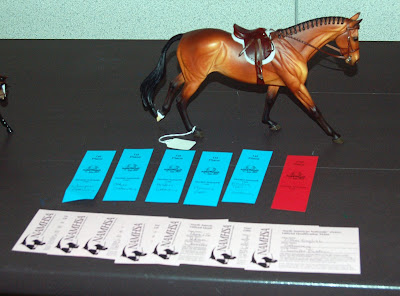 This is the only picture I took during the entire Western performance division. This is Sheila's Nahar being naughty in the Other Western class. He was also naughty in Western Trail but since he won his halter class I think Sheila will forgive him! 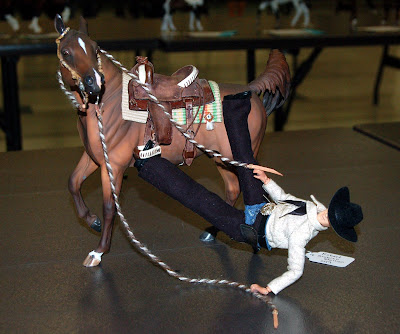 Sheila's Ima Sharpe Cutter Resin was the Reserve Champion in the Western division. 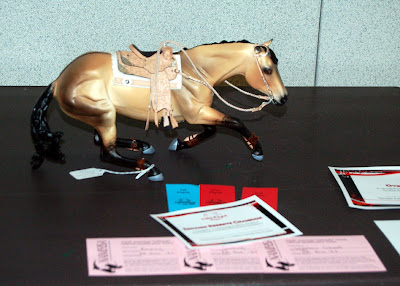 Here are the three performance division champions posing with their ribbons on the championship call back table. All three of these models belong to me so I can give you the particulars. Getaway, the English horse, is a Windfall resin sculpted and painted by Sommer Prosser. He was shown in tack by BCS with dolls by Karon Grieve and props by Alaina Richardson and Carmen Robertson. Balthazar is a Linda Lima mule resin painted by Suzanne Feld. He was Other Performance champion and also won good ribbons in the Western division. He was shown in tack by Vicky Norris, Margaret Teller and BCS and used dolls by Sheri Wirtz, Jane Schneider, and Traci Durrell-Khalife. His props were made by Carol Herden, Alaina Richardson and myself. The third horse is Dun Up Purdy, a Breyer Zippo customized by Tiffany Purdy. He was the Western Performance champion with his Margaret Teller, Susan Bensema Young and Bcs tack. His doll was dressed by Darla Curtis and I made all his props except for the Carol Herden cows that helped him win the cutting class. 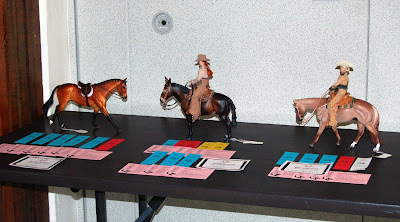 Balthazar ended up winning the Overall Performance Champion with Getaway in the Reserve position. 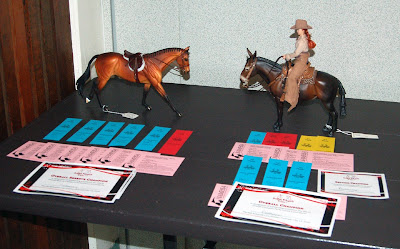 Thanks again to Heather and Teresa for holding this show and Christie for doing such a good job judging. I had a blast!
Posted by Braymere at 8:46 AM