If you are looking for something to do with your slow speed or standing model in the Other Games class, this Performance Spotlight series is for you! All the pictures were taken this past Sunday at the Sixth Annual Mtn View Schooling/Fun Show in Wellington, Colorado. Like most schooling shows, this particular event caters to beginning and intermediate riders who looking for a fun and safe day on horseback.

There are two main types of competitions at a fun show--timed events and elimination classes. The former are often scaled down versions of events you might see at a regular gymkhana or rodeo. The classes I'm focusing on today fit in this category. They are the Walking Keyhole Race and the Trotting Cone Race.

Before we discuss the Walking Keyhole Race, let's take a quick look at the real deal. The Keyhole Race is a test of not just speed, but also the horse and rider's ability to stop and turn quickly. The horse races across the arena to a "keyhole" pattern marked with flour or powdered chalk in the arena dirt. The horse enters the keyhole, turns 180 degrees to the left or right, and races back across the starting line. Time faults are added to the score if the horse steps on or outside the chalk line. Here is a diagram of a typical Keyhole Race course. 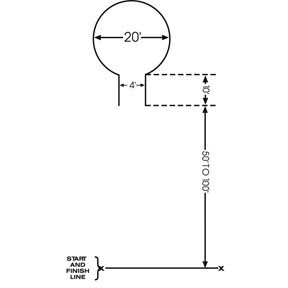 The Walking Key Hole Race is a slow class for beginners who are still learning how to stop and turn their horses. The class is timed and penalties are added to the score of any horse that breaks into a trot. Riders may use Western or English tack and everyone should be wearing a helmet.

On to the pictures! This grey Arabian heads toward the mouth of the keyhole. 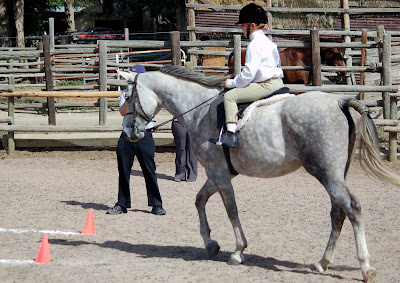 Time starts as soon as the horse passes through the cones. 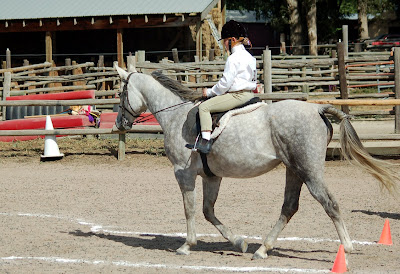 The rider starts her turn as soon as she reaches the round part of the course. 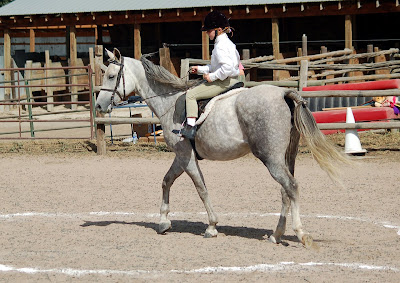 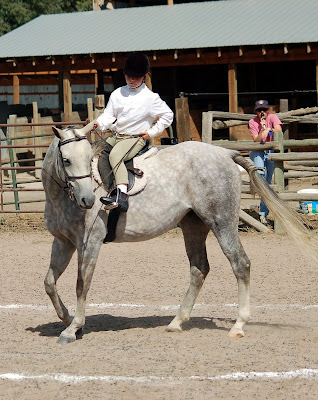 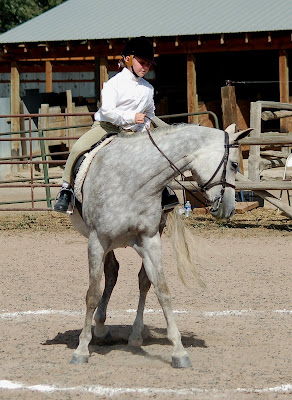 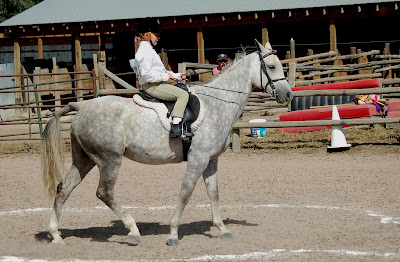 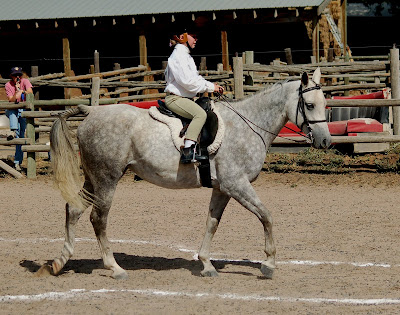 Almost there! Time stops when the horse passes through the cones. Most schooling shows do not use electronic timers, so a doll with a stopwatch makes a nice extra touch. 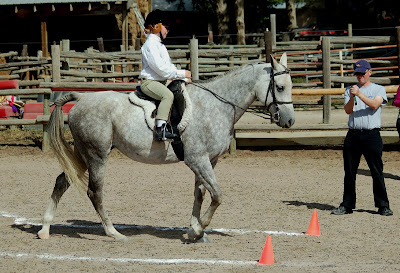 The second scaled down event is the Trotting Cone Race. This is a slow speed variation of Barrel Racing. Three lettered cones replace the barrels, but the cloverleaf pattern remains the same. Refer to my post about Pee Wee Barrel Racing (http://braymere.blogspot.com/2009/09/performance-spotlight-peewee-barrel.html) for a course diagram. Entrants are allowed to walk or trot, but horses that break into a canter will receive time penalties.
Here's a photo tour of the event as performed by Jentry and her pony "Blonde Bombshell." 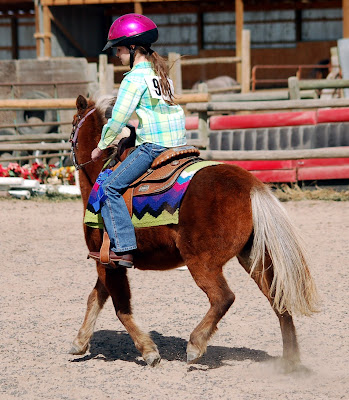 Approaching the first cone at a nice forward trot. 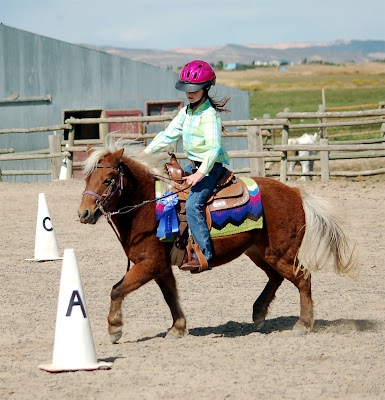 Jentry is a good little rider with solid basics, but her bridle is missing its curb strap. As a result, the bit is not working very well. This resulted in a some unhappy, open mouth moments for the pony. I know Jentry's mother is a knowledgeable horsewoman so I'm kind of baffled about this particular tack decision. If you make this mistake at a model horse show you will almost certainly be placed at the bottom of the class (and rightfully so!). 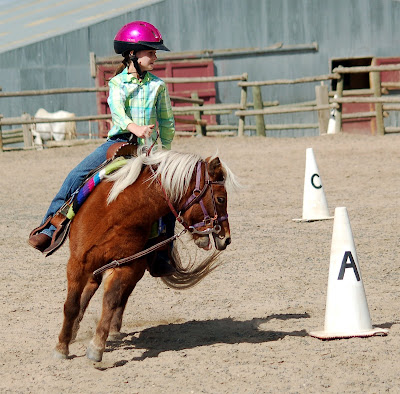 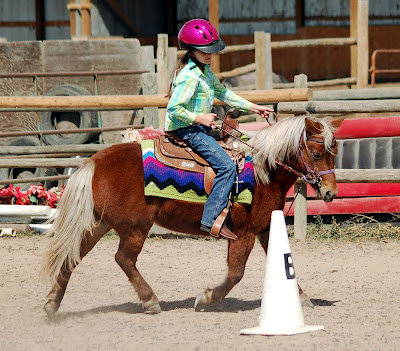 but ended up wide. That's pretty typical. The second cone (or barrel) is where all naughty horses and ponies try to take a shortcut to the ingate. 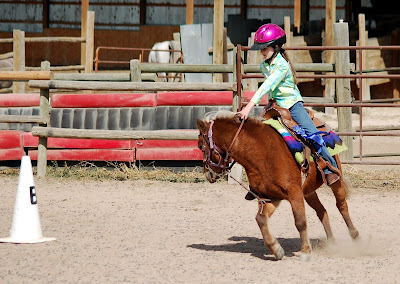 The pony is now pointed in the right direction and is trotting boldly toward the third cone. 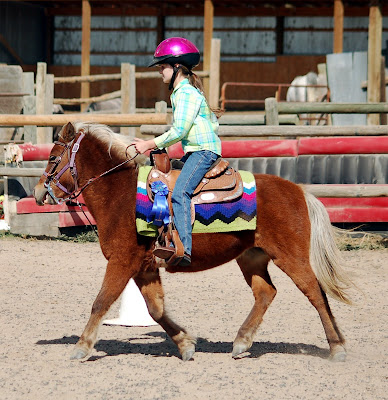 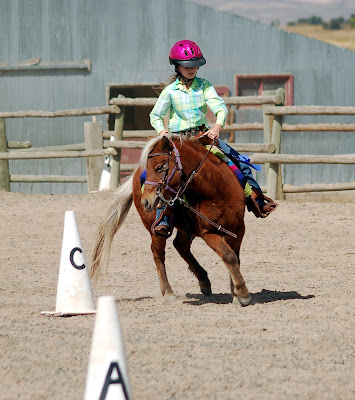 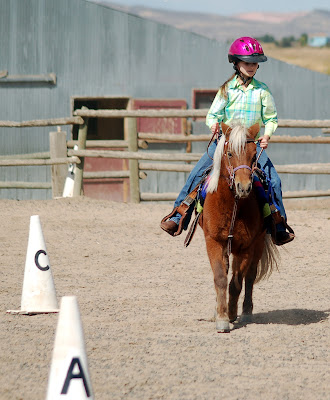 Despite the missing curb strap, this is a nice pair. The pony is ridiculously cute and Jentry rides her very well. I enjoyed watching them compete in all the fun classes over the course of the day. 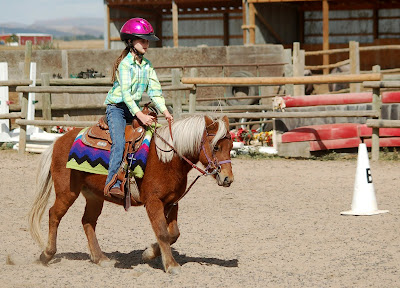