If life had gone according to the plan, I would have a horse crazy daughter of my own. Instead I ended up with two little boys who are perfectly wonderful but almost completely unhorsey. What's a natural born horse mom to do when her kids don't want to go to the barn?

For me the answer was obvious. I needed to find myself a horse daughter. Several years ago I did just that. One of the women in my mom's group had mentioned her horse crazy twelve year several times and I decided to take the plunge. I invited the girl--who I just barely knew--to come out to the stable with me and the rest is history. Cara and I have been riding together for more than three years. It's been a great arrangement for everyone involved, and I have had a wonderful time watching Cara grow and mature both as a rider and as a person.

This weekend Cara and I made our yearly trip to Wellington, Colorado for my friend Trisha's Sixth Annual Mtn View Schooling/Fun Show. This is the first year that I haven't judged at least some of the show, which was good news for Cara. She was no longer restricted to just the classes I wasn't judging, plus I actually had the time to help her school between events.

Cara's mount for the day was Trish's wonderful Arwen pony. Arwen is not a pretty, dainty pony. She has a big head, cranky pony ears and a demeanor that reminds everyone of Eeyore. Still, she's well trained, sensible and just right for Cara at this stage in her riding career. 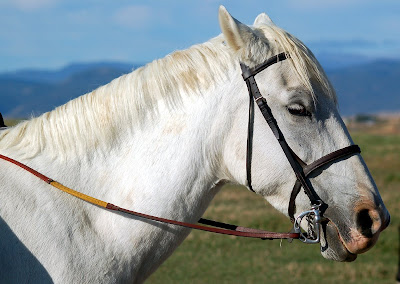 Because I knew Arwen would take care of Cara, I encouraged her to ride in the Open Pleasure and Equitation classes rather than those restricted to green riders. This was a big step up. The other kids in the class own their own horses and have a lot more riding experience. I told Cara not to worry about ribbons and just ride to the best of her abilities. I could tell she was a bit nervous when she entered the ring for the first time. Still, she managed to get all her diagonals... 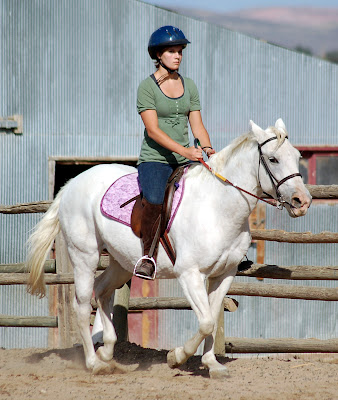 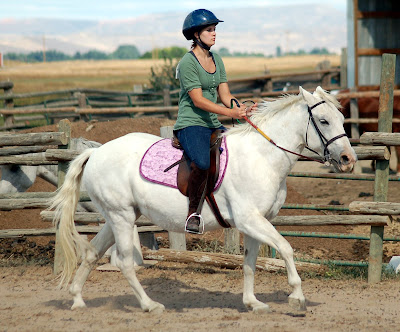 Arwen backed up nicely at the judge's request. 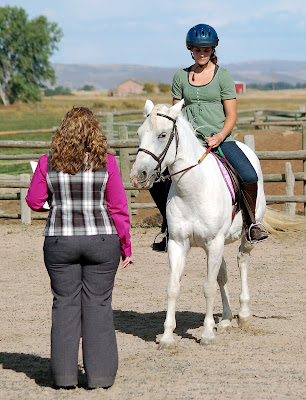 Overall, I thought she rode really, really well. She ended up with a fourth in English Pleasure and a sixth in Huntseat Equitation. Not bad at all! 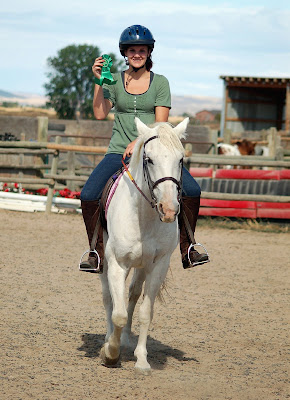 Once the "serious" rail classes were over, the schedule shifted into gymkhana mode. Cara's first class in this division was the Trotting Cone Race. This was essentially a scaled down barrel race to be ridden at either a walk or trot. Cara asked for pointers, and I told her to make tight turns and a maintain a steady, forward trot. Her turns were a bit wide, 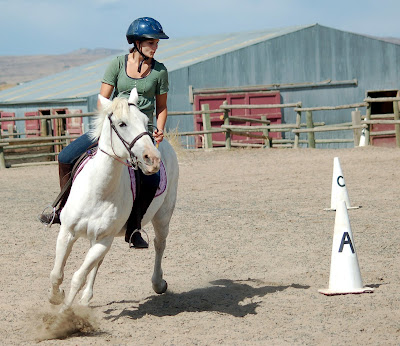 but she did great job keeping Arwen moving forward. Her time was good enough for third place! 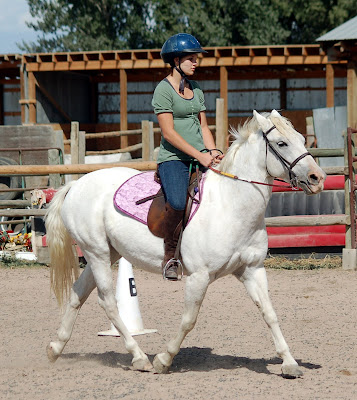 After that, things got a little crazy. Cara made a last minute decision to enter the Simon Says class. It was a big class but fully ten horse and rider combinations were eliminated on the very first command. Cara was one of the only two to survive the cut and ended up winning first place. 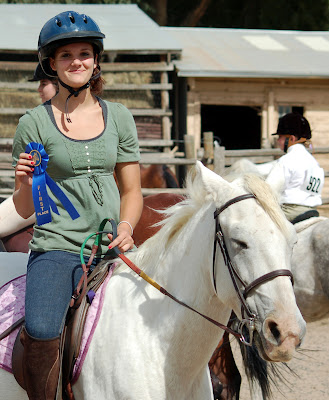 After lunch, we moved outside the ring for the trail class. This is the event that Cara and I had spent the most time preparing for. She'd studied those gate pictures I posted awhile back, and we'd actually rehearsed the obstacle several times sans pony. All that work paid off. The gate was the course's first challenge and Cara nailed it. From there it was all downhill, literally. She and Arwen marched down the hill, 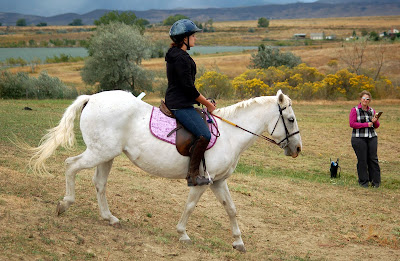 they conquered the mailbox, 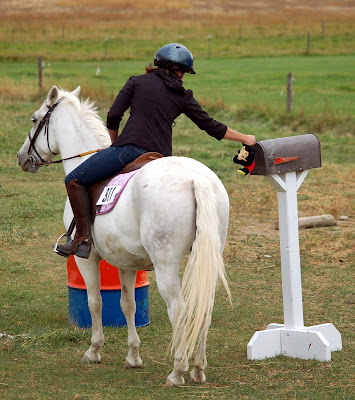 survived the back up obstacle, 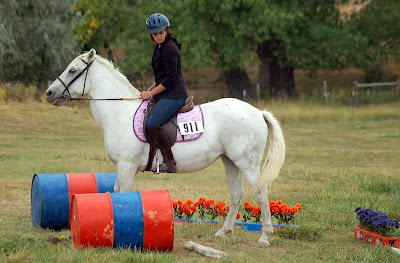 and flew over the cavaletti. 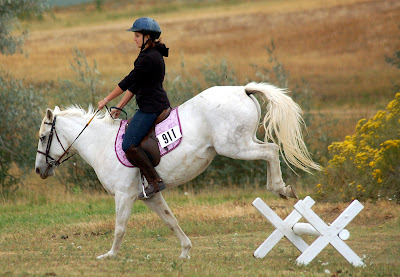 Cara's smile as she cantered back up the hill told the whole story. She and Arwen had done a wonderful job. I couldn't have been more pleased if I had actually ridden the course myself. A few minutes later, Cara received her second blue ribbon of the day. 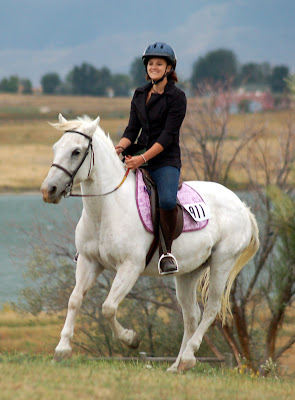 We'd originally signed Cara up to ride in the Pile of Poles class. However, by this point Cara was feeling invincible so we decided to push our luck and go in the Cross Poles Hunters instead. 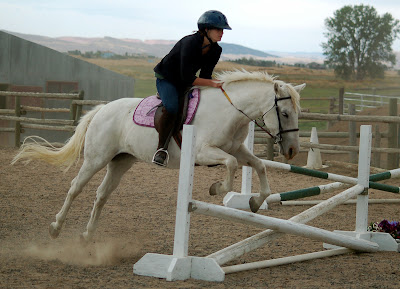 It wasn't always pretty, but Arwen is a trooper and cantered around the entire course jumping from all sorts of improbable distances. Cara rode out of the ring with a huge smile on her face. She looked at me and said, "I love this pony!" 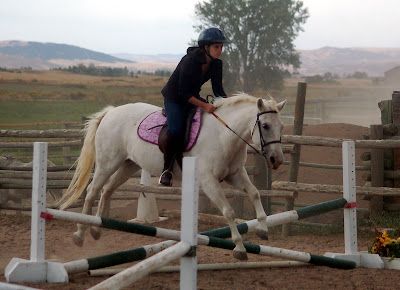 What's not to love? They won the Cross Poles Hunter class, too. Ok, there were only two entries in the class and the other horse had a refusal, but still... That's a lot of nice ribbons for Cara and her loaner pony! 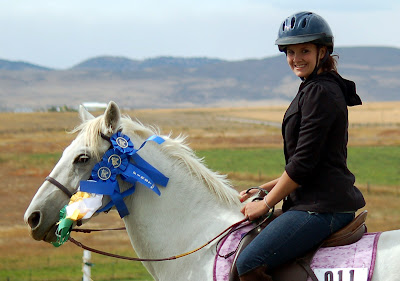 Lots of love for Arwen. 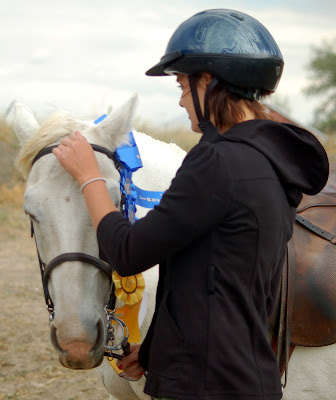 One last picture of the dynamic duo heading back to the barn at the end of a very long, very good day. 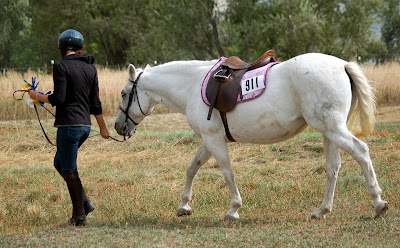 Thanks so much to Trish for making this day possible! My horse daughter and I had a wonderful time.
Posted by Braymere at 7:28 PM