Barrel racing was originally developed as a rodeo event for women, and some seventy years later, it continues to be a mainstay of modern rodeo competition. Most model horse Barrel Racing classes are filled with stock type horses and female dolls in snazzy, color coordinated outfits like those you'd see at National Finals Rodeo in Las Vegas. Certainly there's nothing wrong with that. It's exactly what you'd expect to see at the top levels of the sport.

Today I'm taking a look at the other end of the Barrel Racing spectrum. These photos were taken during the PeeWee Barrel Racing classes at the Aurora Horsemen's Association September Gymkhana held at the Arapahoe County Fairgrounds in Aurora, Colorado. Competition in the Nine and Under and Ten Through Thirteen age division classes was friendly but fierce. Some of the riders showed more enthusiasm than skill... 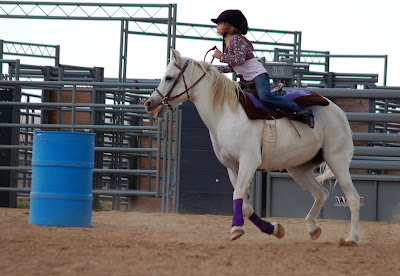 but there were just as many kids who displayed some pretty solid riding ability. 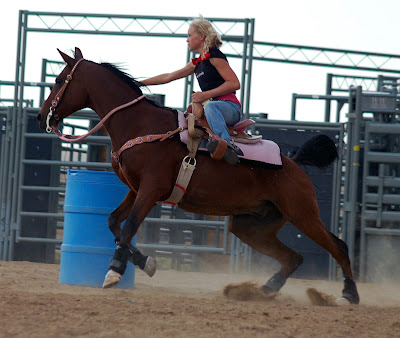 The standard barrel racing pattern is shown below. Although this particular diagram shows the rider starting with the right hand barrel, it is equally correct to start out going to the left. The distance between the barrels varies depending on the size of the area, but it will usually range from 60 to 90 feet. There should also be at least 15 feet between each barrel and the fence. This both ensures the competitors enough room to make a safe turn and also provides enough space for a tractor to drag the arena without moving the barrels.

Although Barrel Racing is a timed class, most of the younger competitors did not go blazingly fast. In fact, nearly every child (particularly in the Nine and Under class) trotted at least part of the pattern. Here's a look at a couple of the runs. This small grey pony entered at a trot... 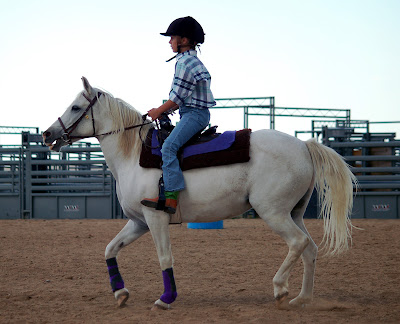 and picked up a canter as she approached the first barrel. 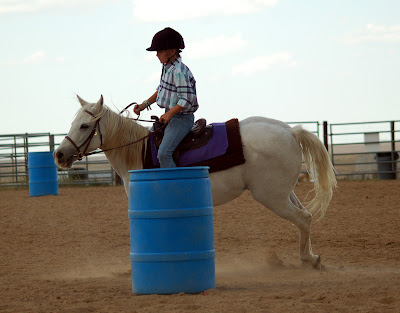 Still cantering at the second barrel, but if you look closely you'll notice she's on the wrong lead. 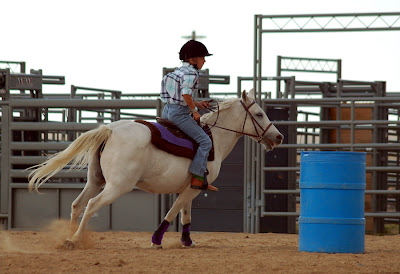 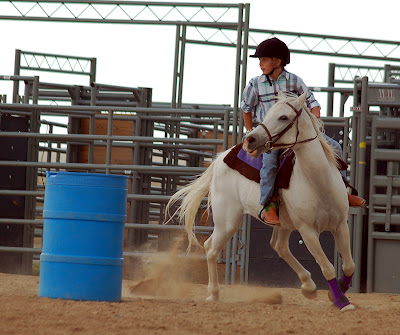 The pony is pointed in the right direction now, but she's lost nearly all her momentum. 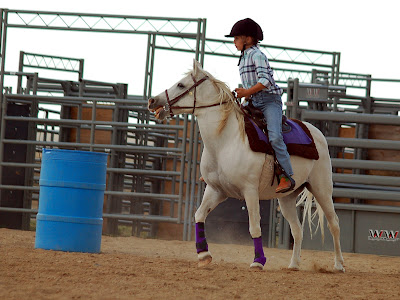 I didn't have a good shot at the third barrel from my vantage point so there are no pictures of that one. Instead here's a picture of her final gallop to the timer line. Even the slowest entries cantered this part of the pattern. 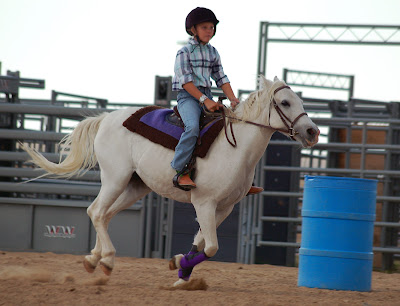 This little girl started out at a nice strong canter... 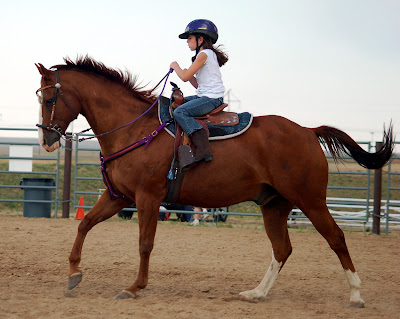 but slowed down for her turns. 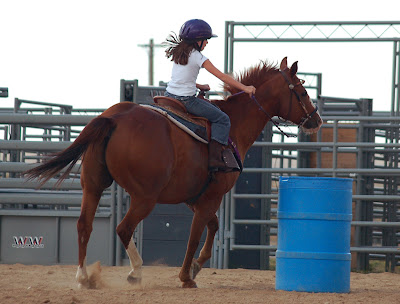 This was a good strategy. 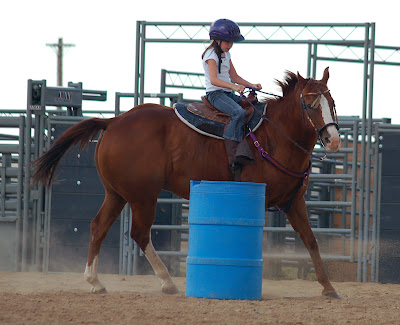 Most of the kids went very wide on the turns and lost a lot of time. 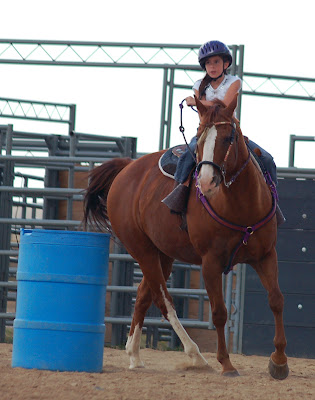 Sometimes slow and steady really does win the race! I'm not sure what the final placing were but I know this pair did quite well. 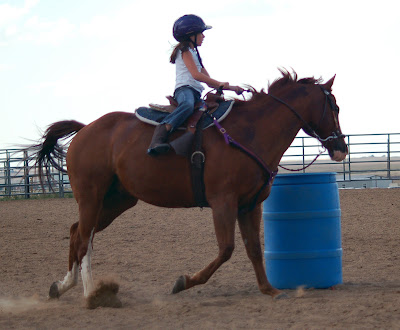 Heading for the third barrel. 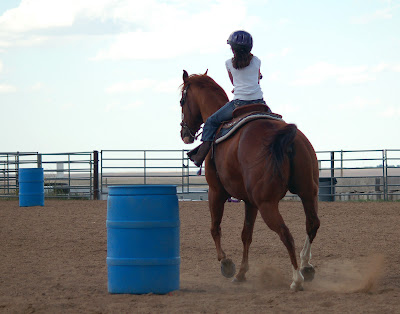 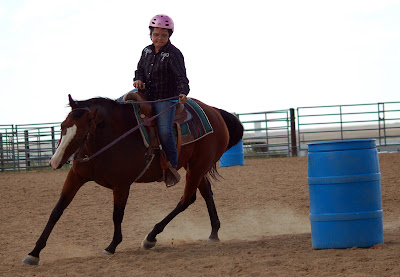 Also wide, but much faster. Note the split reins. 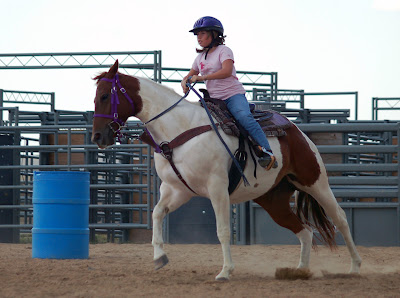 Like I said earlier, everyone cantered between the last barrel and the timers. 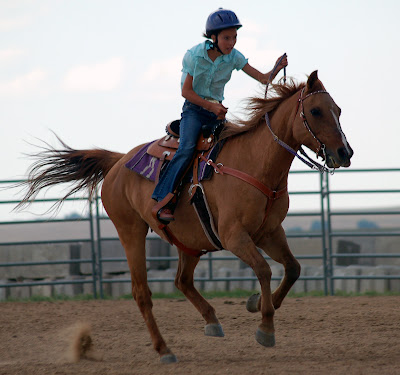 All the horses and ponies seemed safe, sane and basically well behaved. Although the majority were either Quarter Horses or Quarter type grade horses, there were also a couple ponies and one that looked like an Arab. At this level, you don't need an extremely fast horse so pretty much any breed would be acceptable. 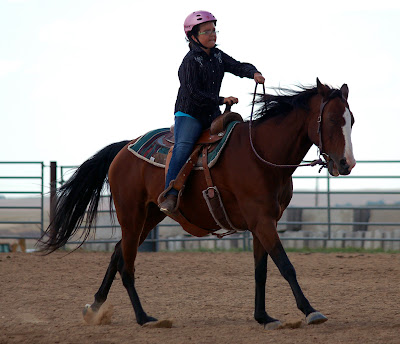 All the kids wore helmets and boots, but attire was generally casual. No one wore chaps. Tack was basic. Most of the horses wore a breastcollar and did not have boots. Snaffles were the bit of choice and no one used a tie down. However, it was truly a case of anything goes. The only thing that every competitor had in common was a Western saddle! 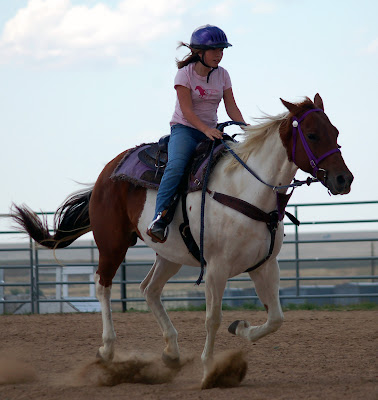 We don't have age divisions at model horse shows, so even the best PeeWee Barrel Racing set up might be overlooked in a class full of PRCA type entries. Still, I think this is a good way to use a slightly slower moving model, especially one with a kind look about it. Not every horse is destined to compete at the top levels of its chosen sport, and not every model looks like an elite athlete. I'm all about matching models to a level of competition that is in accordance with their breed, build and overall demeanor. Better to be a top notch PeeWee horse than a dead slow competitor at the national level!
Posted by Braymere at 1:47 PM