I hadn't planned to talk about dressage again today, but I do want to address a couple of the questions that came up in the comments on the double bridle post. First, in regards to Jane's question, the double bridle really does have two separate bits--a snaffle and a curb. The snaffle is fitted up in the corners of the horse's mouth and the curb lies a bit lower. It's definitely a mouthful! 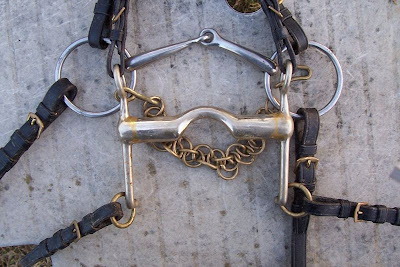 An anonymous poster asked: Are the reins always held the same with double bridles in dressage or is it a matter or preference? Does the same rule apply to Saddleseat double bridles as well? The short answer is no, there is no one correct way to hold the reins. My friend Trisha holds hers the same way I was taught. The curb rein goes between her pinky and ring finger while the snaffle rein enters her hand under the pinky. The snaffle rein is usually wider and goes on the outside where the reins cross one another. 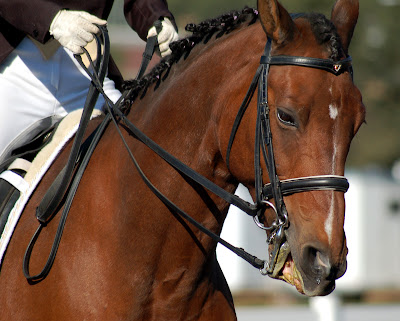 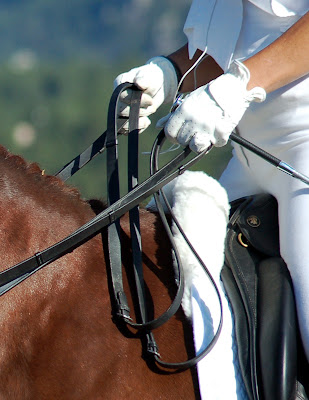 If you would like to see some more exotic methods of holding the reins, check out this site: http://www.classicaldressage.net/members/lesson_pages/spurs_doublebridle.html. You'll have to scroll a bit, but it's worth it--good clear descriptions and excellent pictures. I borrowed the next photo to illustrate one of the more interesting methods described there. Probably I would not set up a model dressage horse this way, but it just goes to show that there is no absolute "right" or "wrong"! 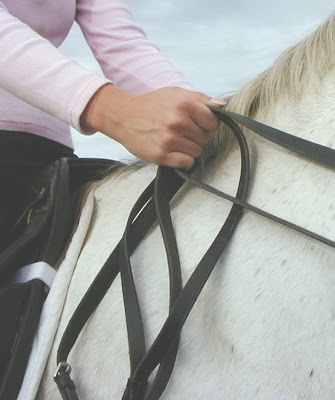 I am not well versed in Saddleseat, but I suspect most riders in that discipline hold their reins in a manner similar to Trish or the rider on the chestnut. With the exception of Equitation classes where there may be one preferred look, it probably doesn't matter all that much. The main thing is that all the four reins should be neat and show the proper amount of contact. This can be quite difficult in model scale. If you manage to get that part right, I'm not going to worry too much about exactly how those reins are entering your rider doll's hands!

Ok, no more dressage for a while--I promise!