Today I am pleased to share an article written by my friend Rosemary Simeon. You may remember Rosemary's name from my MEPSA show posts. She is a superb model photographer and is also a talented writer. This article was originally published in the Australasian International Model Horse Club newsletter, and it describes one of the many tricks Rosemary uses to produce those awesome photographs.

In this article I’m going to try to help you overcome a problem with dolls unable to stand, either because of windy conditions or because of their own inability to balance. Showmanship photos have always been a worry to me because in the past I’ve had the handler fall over and pull the horse over too as they were firmly attached to each other. At least when riders fall off they only damage or dirty themselves and not the precious horse. I am also trying to impart some of my enthusiasm (and yes love too) of the dolls who really make performance photos come alive. All problems can be overcome given a bit of knowledge and some ingenuity.

Over the years I’ve been showing, a couple of people have told me how they overcame the problem of trying to get dolls to run convincingly and still stay upright. You can, of course, prop them against the horse or an arena fence, but it generally doesn’t look too convincing. You would still have problems getting the doll to balance on one leg. David (my Project Manager) and I discussed this problem and what others had done to overcome it, which were variations on the same solution, namely some sort of doll stand. The contraption below is our solution – it looks absolutely weird but works a treat! This method would work with live shows as well as photo shows. Better still it is cheap and can be made out of scraps found in any real man’s shed. The base does need to be as big as shown because of the extreme angles you may want your doll to take. Because the base is very thin, it is easy to disguise in your footing materials. 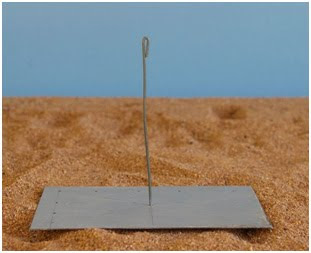 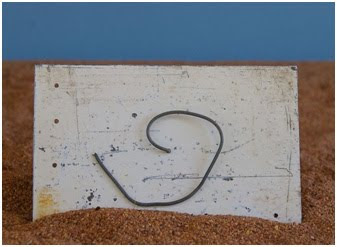 A very simple doll stand made out of a scrap of metal with some wire (probably fencing!) as the support. In the second photo the stand is placed on its side so that you can see that the wire is simply twisted around on the bottom to keep it in place. The support has to be strong enough to support the doll’s weight but thin enough to hide easily. The hook at the top is to allow fine wire to be threaded through to encircle the doll’s waist or top of the legs. You can have a few of these stands with different heights of wire for adult size dolls or child dolls. As I sometimes use more than one doll in a photo shoot, I like to make sure they all have their own stands. This is homemade with a capital “H” ! 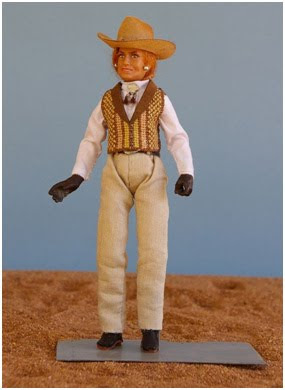 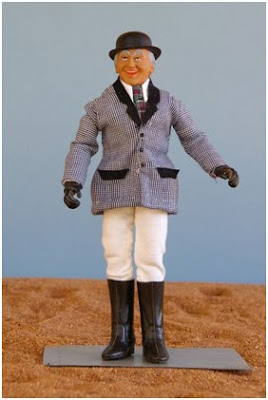 There are two methods of using the wire support. The first photo has the wire support threaded up the inside of the doll’s pants. You can just see the support near her boot on her left leg. The second method has to be used for a doll with long boots; you simply use a piece of fine wire looped through the hook on the top and tie the fine wire around the doll’s waist (or top of his legs in this case). When his coat is pulled down it hides the wire and the support.

That’s all well and fine but these dolls are just standing around … how do we get them to run? Read on! 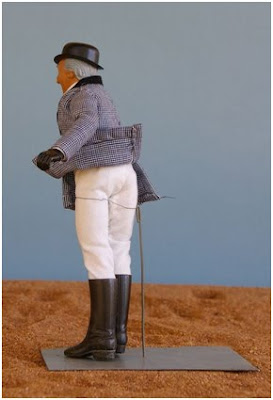 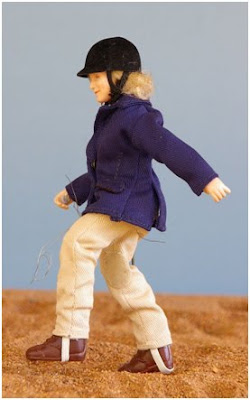 Now this is where it gets interesting! Running … the male handler doll is well and truly hitting his stride. I’ve deliberately let you see the support but in a show photo I would have hidden the support by either the horse’s body or by trying different angles until I succeeded in getting rid of it. The second photo on the right shows a child running and she does have one foot off the ground and I have hidden the support. I could have used the method of running the support up the inside of her jodhpurs but I used the same method as the other doll, i.e. the wire around her waist. You can just see the support on the right, just above her knee.

I might add I took all of these photos on a day that, although sunny, was very windy. Not a single doll hit the dirt and as you can see by the last two photos, these two dolls would not have been able to balance in these extreme positions without help even in still conditions. 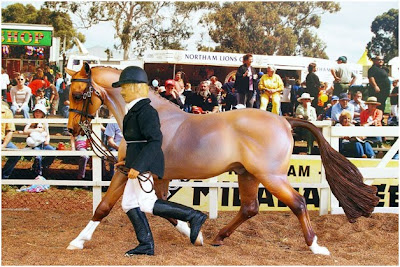 Here we have one of my show photos of Carringal French Cuffs demonstrating the method and I defy you to see the support! The doll would not have been able to balance if leaning on the horse (would have fallen backwards) as he is standing on one bent leg. Also I work outside in natural light where unfortunately there is always some nasty little breeze around to cause me grief.

I hope that this article helps you to overcome problems with your dolls and I hope to see lots of great performance photos!
Ok, this is Jennifer again. I want to thank Rosemary for allowing me use her article. If you enjoyed this and would like to see more along these lines, please post a comment and let her know!
Posted by Braymere at 11:27 AM