I love a parade

Ask anyone who grew up in the Pasadena area--New Year's Day is all about the Rose Parade. My parents' house is just a couple miles from the parade route and for the first two decades of my life, New Year's activities centered around being part of the masses lined up to see the floats, bands and horses. I'm sure you can guess which of those I was the most interested in! 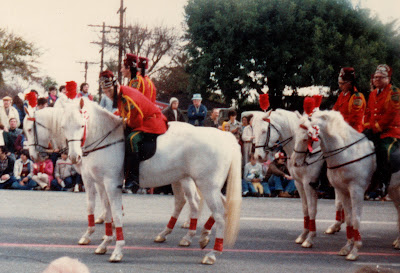 The Rose Parade is an absolute delight for a horse crazy kid. It always seemed like a breed book come to life with Andalusians, Friesians, Appaloosas, Thoroughbreds, Quarter Horses, Paints, Saddlebreds, Arabians, Clydesdales, even Icelandic ponies. And the tack! There were ornate silver parade saddles, Indian costumes, Charro saddles, sidesaddles, military saddles, medieval saddles and fancy show harnesses... It's not that I didn't enjoy the floats and bands, because I did, but for me, the horses were the main attraction. Nothing else even came close! 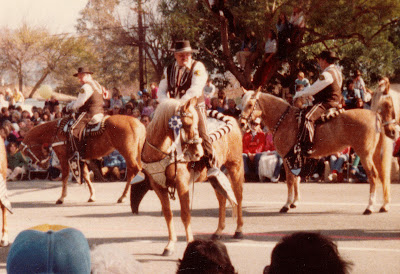 I never tried out for a place on the Rose Court. That held no interest for me, but I did dream of riding in the parade. 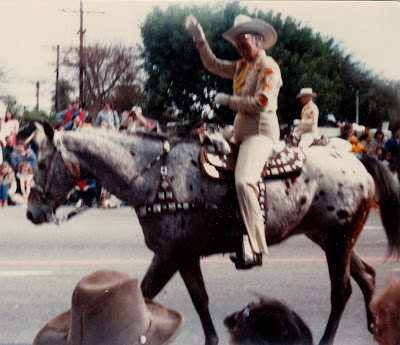 At this point, I think it's safe to say that I will most likely never have a chance to do that. 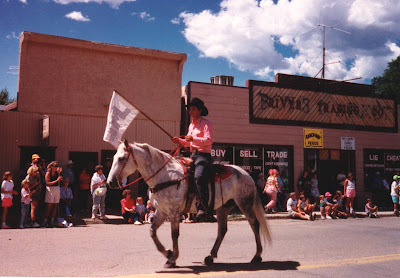 However, I did get to ride in a different kind of parade the summer I was 21 and working at the second dude ranch. My four fellow wranglers and I cleaned up five grey horses and represented Lake Mancos Ranch in the Mancos Days parade. We did not win a prize, but it was still a red letter day for me. I really, really enjoyed that ride down mainstreet. 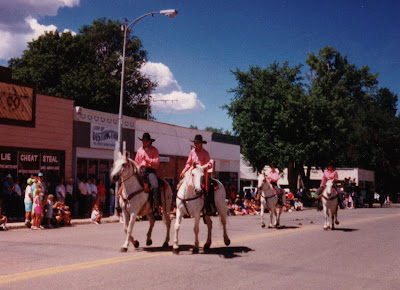 In this picture I'm finally getting to use my best Rose Parade wave! 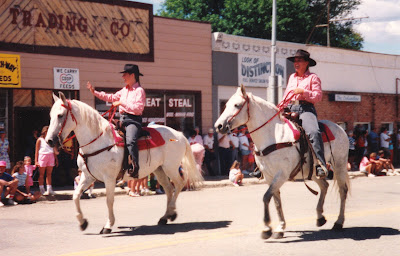 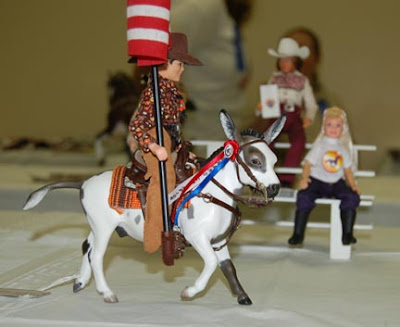 The donkey is Bitesize, a Breyer companion donkey customized by me with some painting help from my friend Jean Sorensen. The saddle and breastcollar are vintage items from Corinne Herb (now Ensor), the doll is by Kim and Lenore Jacobs, the ribbon is by Alaina Richardson, and the bleechers are by Amy Showalter. I made the bridle, saddle pad and the flag holder.
Posted by Braymere at 11:00 AM