A tribute to Margaret Teller

Model Horse $ales Pages is one of my favorite websites. I check it a couple of times every day not to actually buy anything but just to see what's available and how much it's selling for. Mostly it's just a fun place to goof off for a few minutes, but occasionally I find things there that actually matter. That happened yesterday. I was cruising along checking out the hobby's newest offerings when among the usual sales ads, I spotted a notice posted by Joyce Savage announcing the untimely passing of Margaret Teller. With Joyce's permission, I'm reprinting the text of that announcement here:

I am saddened to announce that the model horse industry has lost a wonderful person as well as one the most talented tack makers I have personally had the pleasure to ever know.

Margaret Teller lost her battle to cancer on Sept. 10, 2008. She is survived by her only daughter Alysha. I just recently received a phone call from Alysha telling me of her loss.

I will miss Margaret very much. She was a treasured friend and I am very privileged to own many of her beautiful tack sets along with the last western set she made that is pictured in the top photo.

Top of Ohio Live will dedicate their show this year in Margaret's honor and memory. A collection will be taken for daughter Alysha as she is going to continue with her college education, but will reluctantly have to sell the farm.

The industry has lost a wonderful person ! Rest in peace Margaret! 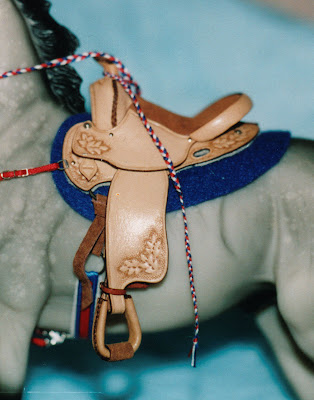 I did not know Margaret, but she has been one of my tack idols for at least a decade. I distinctly remember obsessing over her New Age Saddlery ads in The Hobby Horse News during the late 1990's. Such beautiful saddles and they looked so real! It seemed impossible to me that anyone could make something that small look so perfect. I couldn't help but wonder if they were as impressive in person. I kind of doubted it.
Fast forward a couple years to the beginning of 2003. I'd just begun advertising my tack online and I had someone contact me to see if I could make a tie down to match her gaming saddle. It was a $10 order, but at that point I was delighted to get any orders at all. I said I'd be happy to do it, and the customer surprised me by saying she was going to ship the entire set-up to me. Horse and tack arrived a few days later and I discovered--to my absolute delight--that the tack was made by none other than Margaret Teller.
As you've probably guessed, that's the gaming saddle in the top two pictures of this post. I was totally blown away by the quality of the craftsmanship--the smooth clean edges, the precision with which all the pieces fit together, and the total attention to detail. There was no doubt--those pictures in the Hobby Horse News hadn't lied. Margaret's saddles were every bit as good in person. I think I must have taken a dozen pictures of this saddle and I know I kept it a few days longer than was really necessary to complete the tiedown. It was just so pretty. I hated to send it back! 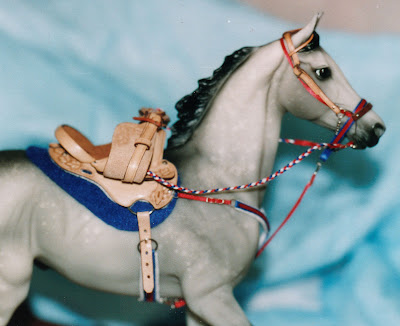 About six months later I came into a little bit of found money at the same time that one of Margaret's new saddles was being offered at auction. I decided to bid on it and was surprised when nobody outbid me. Here is a picture of that saddle. 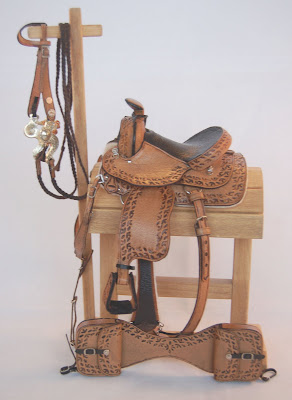 I don't show Western performance all that often (0r well!), but that saddle has helped Plain Brown Wrapper win NAN cards in several different classes. Here he is flag racing at Wild Wild West Live in 2007. 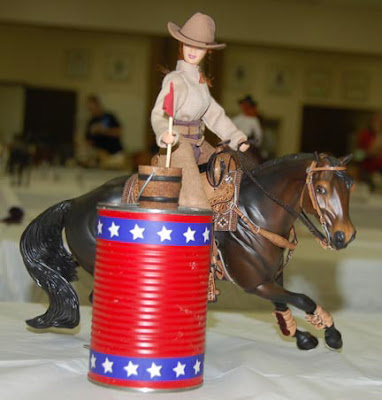 Not too long after I bought my first Teller saddle, I was able to buy another one on the secondary market. This one was a bit older and was scaled to fit the shorter, old-style Breyer dolls. I rehung the fenders so that the saddle would fit the newer dolls and also replaced billets as they were quite worn. You can see these changes in the picture, but I'd like to think they don't detract from the beauty of Margaret's work. I just love this saddle. The craftsmanship on the pommel area in particular still amazes me! 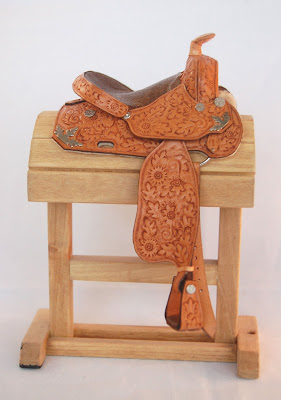 Here's a picture of the second Teller saddle in action. Once again, this was taken at Wild Wild West Live in 2007 and it shows Dun Up Purdy winning the Western Performance division championship (my first and so far only Western Championship). Purdy is a customized Breyer Zippo by Tiffany Purdy, his bridle and breastcollar are by Susan Bensema Young, the pad is by Ingrid Mattes and Darla Curtis dressed the doll. 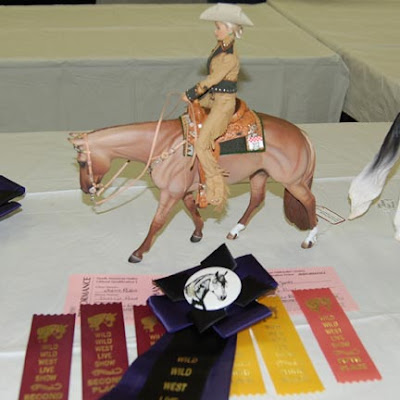 Margaret was certainly not unknown in the hobby but she wasn't very high profile either. She didn't do a lot of advertising and I never saw her post to any message boards or Yahoo lists. Because of this, I suspect a lot of hobbyists haven't heard of her. Don't let that fool you. Margaret's Western saddles are among the best in the hobby and she will be greatly missed by this tack junkie.
Posted by Braymere at 7:56 AM