Pride goes before the fall

I spent my twentieth summer working at a guest ranch located in the San Isabel Mountains in south central Colorado. The Don K maintained a herd of sixty five to seventy horses during the summer, but only 15 of those actually belonged to the ranch. The others were leased from an outfit called Sombrero Ranch which provides horses to guest ranches and camps throughout the Rocky Mountain region. Sombrero Ranch owns literally thousands of horses, and not surprisingly, the quality of their horses is all over the map. Some are your stereotypical dude horses--slow, steady and happy to plod along in line. Horses like that make a wrangler's job easy. We loved those horses. Unfortunately, we also received our share of unbroke, unsound and downright scary horses. My favorite of the problem ponies was this little pinto gelding named Cherokee. 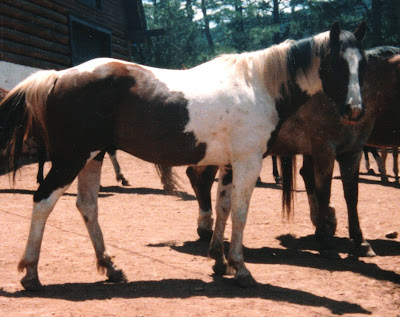 Cherokee seemed quiet enough at first but within a few weeks he'd bucked off two people. One was a guest, but the other was a staff member who had a fair amount of riding experience. At that point our choices were to send him back to Sombrero or assign him to a wrangler. Since we had a lot of horses that were worse, he became my mount. 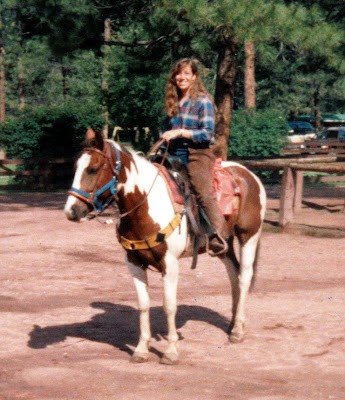 It did not take me long to figure out that Cherokee's main problem was that he was very young and very green. He knew start and stop but almost nothing beyond that. I spent a lot of extra time with him and he rewarded the effort by quickly learning to respond to increasingly lighter and lighter cues.

Of course I was completely in love with him. I had a friend take these pictures of us right before a round up. It was rather chilly that day and I was wearing a warm but unattractive jacket. I didn't want the jacket to be in the picture, so I took it off and dropped it on to a fence. 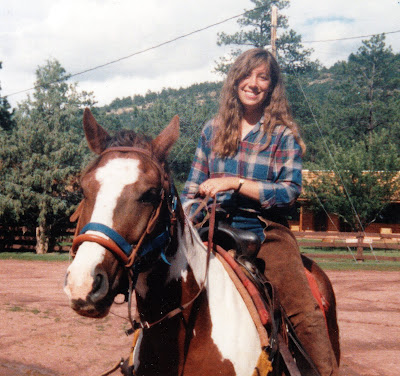 All was well until I went to put the jacket back on. By this time Cherokee and I were working so well together that I'd forgotten how green he really was. I tried to pick up the jacket off his right side, and he totally and completely freaked out. He started spinning and crow hopping in an effort to get away from it. I thought it might be better if I just dropped it. Unfortunately that was more than poor Cherokee could handle. He went up like a rodeo bronc. I have ridden a lot of horses over the years but I have never ever been on a horse that bucked like that. His head disappeared between his knees, and I knew after just one jump that I would never be able to ride it out.
And I didn't. I landed headfirst in a mud puddle. 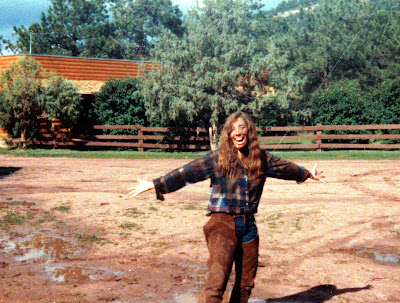 I did get back on Cherokee (after a shower!) and ride him in the round up. He behaved perfectly and I was willing to keep on with him. Sadly, my boss was less forgiving. She'd seen the whole thing and decided that he was a liability the ranch couldn't afford. Despite my protests, he went back to Sombrero less than a week later.
I try to remember this every time I start getting a bit too impressed with myself. I was so convinced I'd done a bang up job training that horse, that I stopped treating him like the greenie he was. If I hadn't wanted to look nice in that picture, I probably would have spent the whole summer riding him. It was a tough lesson.
I was feeling pretty pleased with myself yesterday after I primed that Turtle Arab. I proudly posted pictures of her both here and on Model Horse Blab expecting nothing but praise. The first couple people who responded to my thread on Blab obliged me with some pretty over the top compliments. Thankfully, there are some hobbyists with both a critical eye and the ability to tactfully make suggestions. I'd been vaguely displeased with the neck, but it wasn't until Chelsea Nichols made a couple helpful comments that I was really able to see where I'd gone wrong. Of course, fixing the underside of the neck made me aware of other neck problems which led to notice that the right cheek didn't match the left cheek and... Well, let's just say she's back in the epoxy stage. It's kind of disappointing to realize that the finish line is still a ways off, but it's always better to find and fix problems than live with them for eternity. I'll post progress pictures when I get through the current resculpting stage, and please feel free to point out every last problem. Don't let me get too proud!
Posted by Braymere at 2:06 PM