In real life, I'm a hunter rider. Oh, I've logged a lot of hours in a Western saddle and dabbled in dressage, but I always come back to the hunters. That's where my heart is. As much as I enjoy watching and learning about other disciplines, my allegiance to the huntseat tradition remains unshaken.

Except, that is, when I go to a reining show!
That's what I did last night. My friend Trish and I spent the evening watching reining horses at the Events Center in Denver Stock Show complex. Trish is a serious dressage rider with a FEI level horse, but she also takes reining lessons from well known Colorado reiner Terry Wegener. This made for some very interesting and insightful commentary as she was able to explain the sport from an English rider's perspective.
It's worth mentioning that I started the evening with a fair amount of reining knowledge. Back in my college days, I was member of my school's horse judging team and was fortunate enough to go on a week long, judging "boot camp" to various equine destinations in Texas and Oklahoma. The trip culminated in a judging competition at Texas A&M, but for me the best part came a few days earlier when we attended a big reining show at the Lazy E Arena in Guthrie, OK. Not only did we get to watch a lot of top reiners, but we also had expert running commentary explaining what was good and bad about each run. I can't say that I've retained all the details, but the basics stuck.
So, while everything is once again fresh in my mind, I'm going to spend a couple days talking about reining with an emphasis on aspects most relevant to a model horse performance shower. Please note, I do not "borrow" other people's photographs to illustrate this blog. For better or worse, I'm using my own pictures and the photos accompanying this posting were all taken by me yesterday. The Events Center is a big indoor ring, and the size and lighting of the show pen presented a serious challenge to my amateur photography skills. I did my best, but you could certainly find much better reference pictures elsewhere on the web.
Today I'm going to talk about tack and turnout. To help me with this, I downloaded the relevant section of the National Reining Horse Association rulebook. You can do the same thing here: http://www.nrha.com/handbook.php. Not surprisingly, the section on equipment concerns itself entirely with bits, reins and curb straps. Other than requiring the use of a Western saddle and bridle, there is no mention of other tack items. If a model horse judge tells you that you must use boots in a reining class, she is wrong. Although tradition and convention tell you that you probably should, boots are not officially required and leaving them off is not grounds for disqualification.
That said, nearly every horse I saw yesterday was turned out more or less like this. 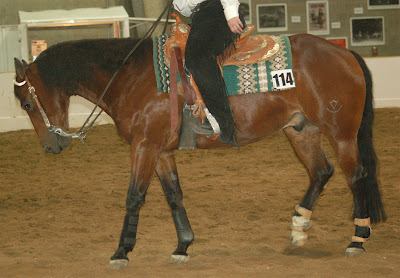 The majority of saddles were light to medium oil in color, had some silver and were not equipped with a back cinch. Exhibitor numbers were attached to the back corners of saddle blanket and I think I saw just one breastcollar all night. 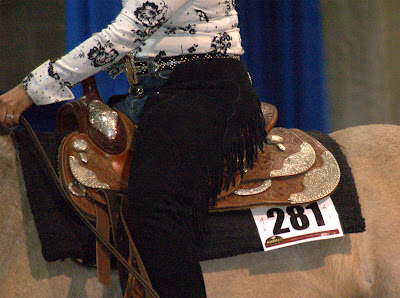 There were however, a fairly large amount of people riding in plainer working type saddles such as these. Although it's not the case here, most of the working saddles did have back cinches. 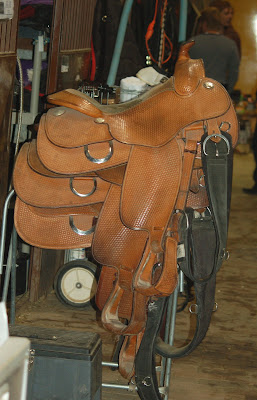 The type of bit a reining horse wears depends upon his age. Younger horses may show in a bosal or snaffle. Senior horses will wear a curb. All the horses we saw last night were wearing curb bits with one ear or two ear headstalls. Bridle styles ranged from utilitarian to bling bling with most falling somewhere in the middle. Split reins (sometimes very long split reins) were the majority choice with only a handful of riders using romals. 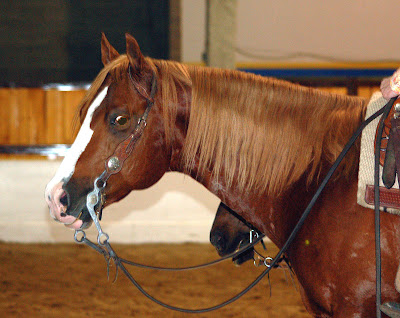 Every single horse wore some type of sports medicine type splint boots on his front legs. These boots were either black or white. I did not see anyone using bright colors. This particular horse is also wearing bell boots. 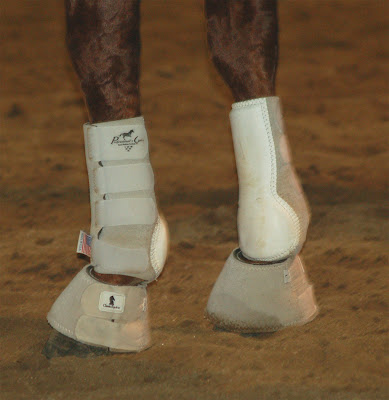 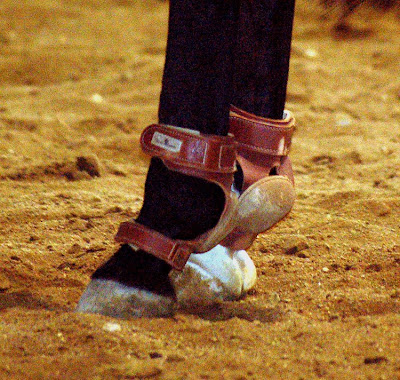 but there were a few horses wearing neoprene skids instead. 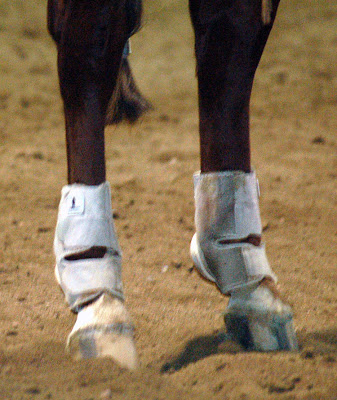 With the exception of freestyle classes, riders are required to wear "Western attire," which the rule book defines as including a long sleeve shirt, Western hat or safety helmet and boots. All the riders wore chaps to show (not necessarily to warm up!). Many of the women had Western Pleasure type outfits that matched their saddle blankets. The men tended to be more casual in their Western shirts and neutral saddle blankets. Mane styles ranged from pulled with bridle paths to "au naturel"--very long, no visible bridle path. Tails were uniformly long and full. 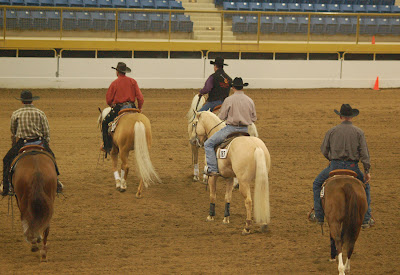 Tomorrow I'll talk a bit about patterns and movements. Please let me know if this type of article is interesting to you!
Posted by Braymere at 10:16 AM