Hurray for hobby friends! I have the worst habit of starting but not finishing ambitious customs. The cycle goes like this--an initial burst of enthusiasm carries me right through the cutting apart and reassembling stages. I get the model to a place where it's fairly smooth and nearly ready for paint. Then it happens... I lose my momentum. The horse moves from my work area upstairs to the project shelf in the basement. Eventually I get tired of looking at it and it goes back into the body box. That's the kiss of death. The body box is Hotel California--it's easy to get in but no one ever leaves.

Right now there are several horses on my project shelf that are in danger of having that happen to them. These aren't marginal customs--there's nothing terribly wrong with any of them. The only thing they really need is for someone to give me a good firm push to get them going again.


Today, I got that push. My friend Regan is just as slow a customizer as I am. She called me earlier in the week and asked if I'd like to go over to her house and work on customs. Of course I said yes. Silly Regan! She refers to this as me making her work, but really it was her making me work.


I brought two horses with me. One is the customized Veiled resin whose head I reset a couple months ago. This little mare is very nearly done. Mostly she just needs to have some broken mane tips fixed although I would also like to add Saddlebred style braids to her mane and forelock. I worked on the mane tips today. I also fixed a corner of her stand which had broken. 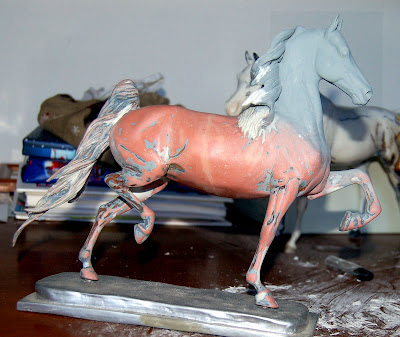 The other horse was my Turtle Arab. Early progress on this one stalled after a large section of epoxy on its hind end failed to cure properly. The only way to fix that is to pick it all off and start over again, which was not something looked forward to doing. I probably wouldn't have done it at all, if I hadn't decided to take her with me today. This picture shows Turtle Arab standing over the reference portfolio I put together to help me work on her. 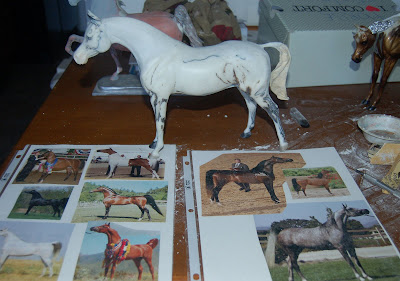 And here is Turtle Arab feeling pleased with herself because even in her unfinished state she's still prettier than Regan's in-progress Stone Arab! 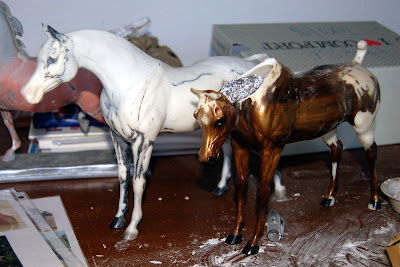 In addition to redoing the area where the bad epoxy was, I also straightened the angles of her right hind leg. 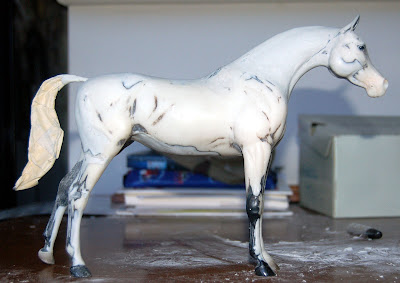 That made her a little tippy, so I moved the left foot back to help her balance. It worked, but I'm not done fiddling with those legs. They're better but still not quite right. 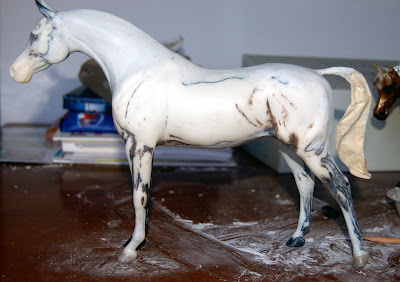 One last picture of something that emerged from the depths of Regan's body box. This is a vintage, in-progress custom by Traci Caller. I think this guy is really cool and hope Regan will finish him someday. Any guesses as to which Breyer he used to be? 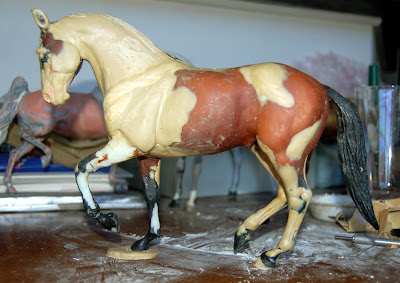