Reining is often referred to as "Cowboy Dressage" and there are definite similarities. Both events test the ability of horse and rider to perform a set pattern of movements with control, precision and (hopefully) brilliance. It is not unusual to see reining classes at various breed shows, but there are also independent, stand-alone reining shows governed by the National Reining Horse Association. For the purposes of this article, I'm going to focus on shows run under NRHA rules.

The NRHA has ten numbered patterns for regular competition and one simplified pattern for use in Youth 10 and Under Short Stirrup classes only. You can download a pdf copy of all eleven patterns here: http://www.nrha.com/forms/2008/patternbook.pdf. Each pattern tests the horse's ability to perform eight different kinds of movements, and other than the order in which the movements are performed, there are no major differences among the patterns.
The eight movements are: rundowns, sliding stops, rollbacks, spins, circles, flying changes, hesitates and back. Horses do not walk or trot anywhere on the pattern. I know there are a lot of people who like to show one model in every possible performance class, but I personally believe walking and jogging horses should sit this one out.
The rundown and sliding stop are probably the two movements most people picture when they think of reining. The rundown is exactly what its name implies--in preparation for the stop, the horse will run (gallop) down the long side of the show pen. The horse is required to stay at least twenty feet off the rail, which is important to remember if you want to show your galloping model performing a rundown. Make sure you do not place him right up against your fence prop. Be careful, too, to select a horse that is moving straight and is not going full-out. Think controlled gallop as opposed to racing speed. Reiners tend to go with their heads down and their bodies low to the ground. While it's tempting to use a model like Smarty Jones for this movement, he's actually going too fast and "up" to be a top notch contender.
During a sliding stop, the horse will sit down and lock his hind legs while continuing to "walk" in front. Rather than coming to an immediate halt, this allows him to slide several feet and kick up a great spray of footing and dust. The horse's body should remain straight and his position should stay the same throughout the slide. He should be soft through head and neck and should not open his mouth. Obviously this is a movement that is only going to work with a model that has been sculpted specifically for this event. For original finish models, that would be the Breyer classic sized reiner or the old BHR resin. There are several choices as far as artist's resins. I'm not sure I've seen any of them in person, but I think the Eberl sliding stop QH mare is probably the best of the lot. 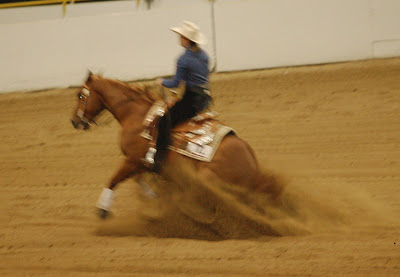 I do not have any pictures of a rollback (not even bad, blurry pictures!), but it is a pretty easy maneuver to describe as it is basically just a 180-degree turn made immediately after a sliding stop. As soon as the horse has changed direction he must move off into a lope. The horse must turn on his hindquarters with his hocks well underneath him and the entire movement should be smooth and fluid. This is the place I would use a horse in a cutting type turn if I were determined to show one in reining. It's not a perfect fit (particularly for those models that are really low in front), but it's a better choice than saying that your Whiplash is performing a spin.
Like the sliding stop, spins are a real crowd pleaser. Beginning from a standstill, the horse will spin 360 degrees or more (up to four and one-quarter full turns) in place. The inside hind leg remains in the same spot throughout the spin , though the horse will pick it up and put it down as it turns. Advanced horses will spin very quickly, but maintaining correct form and smoothness are just as important as speed. I think Brigitte Eberl has sculpted a spinning QH resin, but other than that, I can not think of any models that work well for this particular movement. I do not care to see either the Breyer Ranch Horse or the Stone Performance horse here. I know it's tempting, but neither one of them has the correct form for a spin. 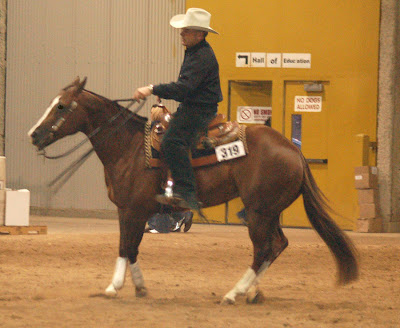 Each pattern also includes a section of circle work. Horses will be asked to lope both small, slow circles and large, fast circles. There should be a noticeable difference in speed and a definite transition from one speed to another at the center of the arena. The horse in the picture is doing a small slow circle as evidenced by his collected frame and his rider's high hand. This is the best place to use a model that is either loping or galloping (again, think fast but controlled) with a slight bend to its body. 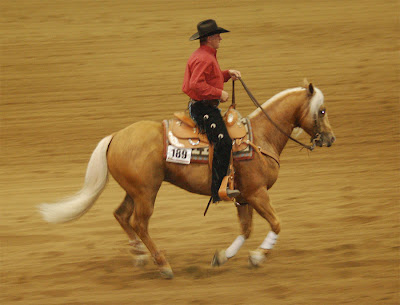 Flying changes occur when the horse changes his direction during circle work. He should move effortlessly from the right to left lead (or vice versa) without noticeable changes in the speed or rhythm of his gait. Flying changes can be deceptively difficult. Many horses anticipate the changes and get charge-y. Other horses have trouble getting clean changes with both their front and back legs or do not change at all. As far as model horses go, however, this one's easy--just don't do it!
It may be nearly impossible to accurately capture a flying change in the model showpen, but portraying the next movement is dead easy. The hesitate is just what its name implies. After completing a movement, the horse is asked to stop and settle before continuing on with the next maneuver. Hesitations are particularly noticeable after spins. If the horse does not come out of the spin standing square, his rider will usually take a moment to ease him back into position as is the case in this picture. 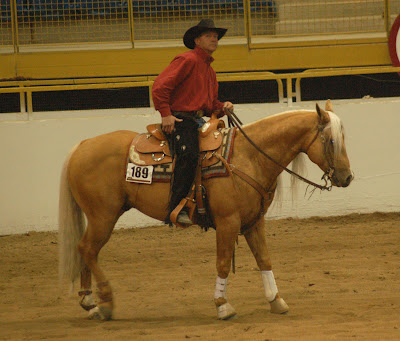 Hesitations are not judged movements per se. However, they are part of the reining pattern and a horse who does not stop and stand quietly will be penalized. This picture was taken during warm up rather than actual competition. However it's pretty typical of what a hesitation can look like. The horse does not just pause for a split second. He stops and stands for long enough to really catch his breath. This is the best choice for showing a standing model in reining. I would much rather see a standing model hesitating than performing a bit check. Honestly, to me the whole bit check thing is no better than "waiting to begin." It's something that's done outside the arena and is not part of the judged competition. 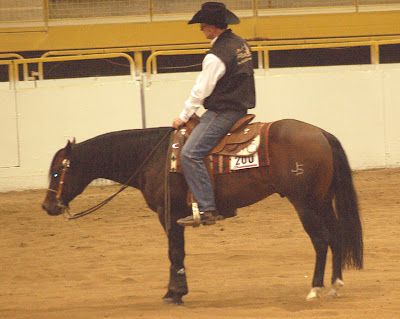 The eighth and last movement is the back or backup. After a sliding stop, the horse is asked to back up quickly for at least ten feet.The horse should back smoothly, in a perfectly straight line, stop when asked and hesitate a moment before starting the next movement. Please note that when a horse backs properly, his legs move in diagonal pairs. The gait is similar to a backwards trot in that respect. I've seen both the Breyer Ranch Horse and the Stone Performance Horse described as backing and neither's legs are even close to a correct backing position. 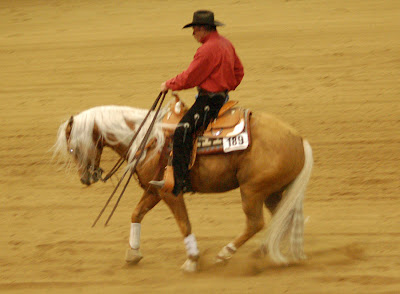 Once again, I hope this has been helpful. To gain a better understanding of the sport of reining, I would suggest you visit the National Reining Horse Association's home page: http://nrha.com/. There is four minute video about halfway down the page that clearly shows a top level reining horse perform a winning run. If a picture is worth a thousand words, a good video is probably worth ten times that and will clearly illustrate in less than five minutes all that I have labored to describe here.
Posted by Braymere at 9:22 AM