More on Charlie the Jumping Mule

This is so cool.

After reading yesterday's post, Shannon Granger was inspired to do a little research on Libby Chase and her jumping mule Charlie.  She found this article in a 1956 edition of Sports Illustrated.

After a lifetime of what might be described as involuntary social climbing, Charlie the Jumping Mule has finally crashed society; last week despite his long ears and less than perfect family background he competed as a hunter in the seventh annual Chicago Hunter Trials at the Oak Brook Polo Club, Hinsdale, 111. Charlie seemed rather bored but his fond owner and rider, Mrs. Libby Chase Swift—a wiry, middle-aged Chicago socialite who possesses a certain sense of drama—was tremendously set up by it. Recognition had not come without struggle. 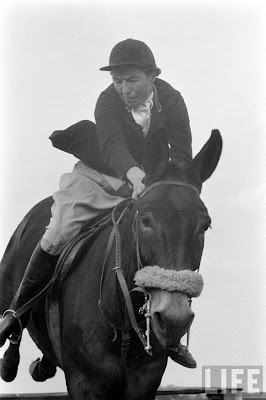 Charlie, one might say, is Mrs. Swift's invention; at any rate it was she who decided to breed a Thoroughbred mare named Kilishia (whose Grandsire, Black Toney, also sired two Kentucky Derby winners) to a jackass ten years ago, and Charlie was the result. When Charlie was two, Mrs. Swift began training him with her jumpers. Charlie soon proved that he could leap over almost anything—if he was in the mood—and Mrs. Swift, delighted with his talent and personality, took him to her ranch in California and set about preparing him for greater things. She held parties for him on his birthdays and brought him into her house, shod in green felt house slippers, to eat cakes made of oats and bran with carrot frosting. She also rode to hounds with him. 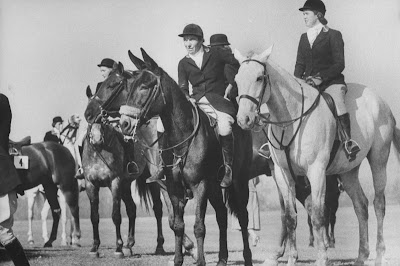 When she attempted to enter him in California horse shows, however, she was refused; also, nobody would admit Charlie was a hunter, although he loved fences so much that he jumped them by himself and sometimes went from pasture to pasture releasing horses incarcerated therein by opening gates with his nose. Mrs. Swift rebelled by holding a "mule show" in which Charlie won ribbons, but real social recognition was refused him. "They're new out there in California," said his owner, "and they wouldn't qualify him." 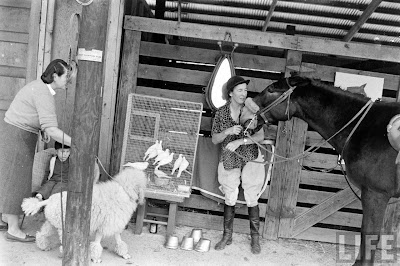 But a few weeks ago Theodore Mohlman, joint master of hounds for the Oak Brook hunter trials, agreed to let Charlie enter. "I don't see any reason why he shouldn't be permitted to jump as a hunter if he's doing what he's supposed to do. If he carries his rider across country and across fences, well, in my opinion that makes him a hunter." Charlie responded amiably enough in his first official trial and took Mrs. Swift over nine obstacles in the Ladies Hunters Trial with ease. He did not win. "It's a nice jumping mule," said the judge, "but it hasn't got style and it looks like it likes to eat, too." 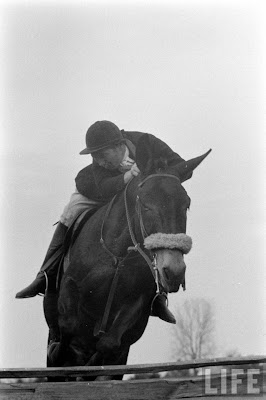 Charlie got more attention than any of the horses, however; Mrs. Swift saw to that by pulling four gold-colored rubber shoes over his hoofs and riding him through the Polo Club dining room at lunch. 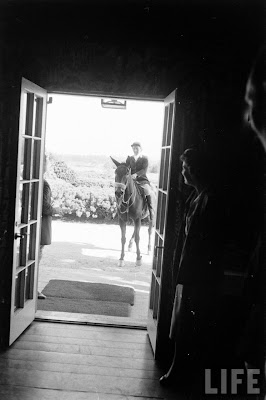 Inspired by Shannon's efforts, I also plugged Libby and Charlie's names into Google.  My efforts were rewarded with this November 26, 1956 article from Life Magazine.  I also found the pictures accompanying today's post.  They were taken by Life photographer Grey Villet and are just a few of the many photographs he took of the pair. 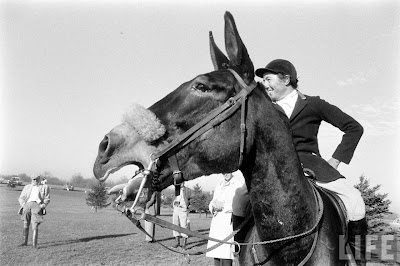 I've spent the day been forwarding my finds to Trish who is sharing them with her husband (Libby's grandson).  It's been a lot of fun for all of us...  I know I said this before, but this is so cool!
Posted by Braymere at 1:52 PM