Classes at the Point to Point

If you are looking for a fun event for those Other English classes, this is the post for you!  It doesn't matter if your favorite performance horse is standing, walking, trotting, gaiting, cantering, galloping or jumping--there's something for everyone at the Point to Point.

The Arapahoe Hunt Club Point to Point offered three separate divisions--Local Hunters, Master's and Huntsman's.  The Local Hunter Division was open to horse and rider teams who are not members of an organized Rocky Mountain Hunt Club.  The only tack and attire requirements were that riders must wear helmets and boots.  Western riders were specifically invited to participate but we did not see any.   As noted yesterday, we did see at least one gaited horse. 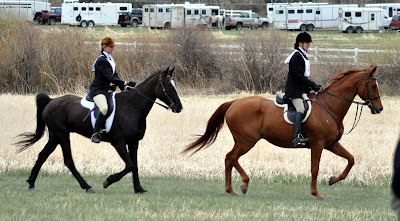 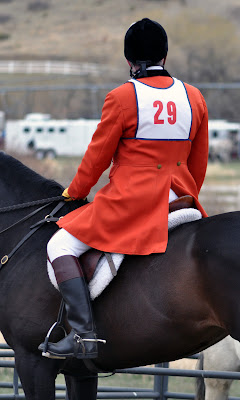 There were no individual classes at this Point to Point.  Instead, riders competed in teams consisting of 2-4 horses.  Some teams were well matched in size and color... 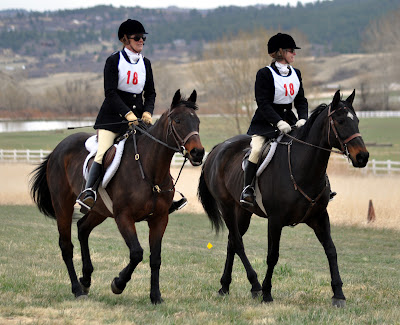 but the majority of the teams looked more like this: 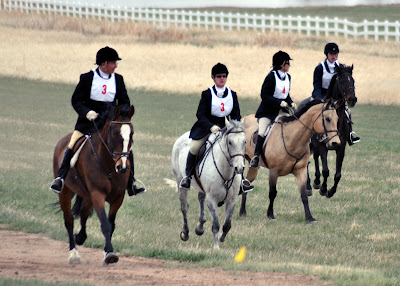 There were also a number of parent/child teams which I thought was especially delightful! 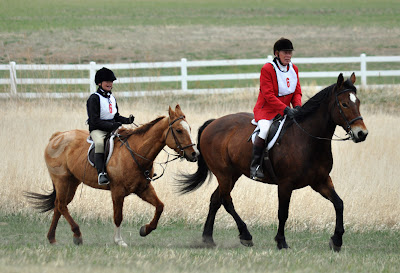 Each division included three types of classes--a Race, a Pace and a Handy Hunter course.  Although the specifics vary, they all followed the same basic format.  One member of the team entered the starting gate while the other member(s) lined up alongside. 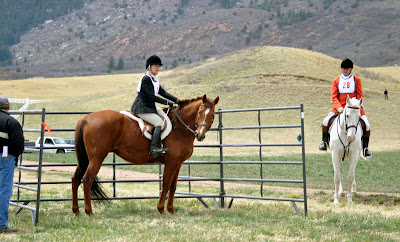 At the starter's signal, they left the box at a walk... 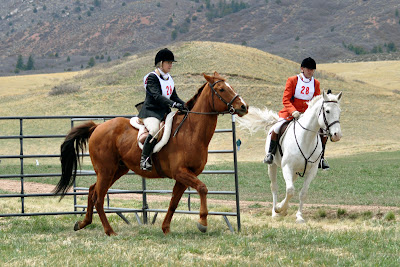 and gradually picked up speed... 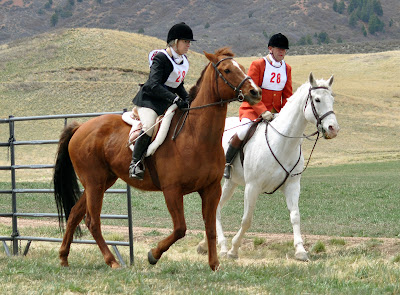 as they moved out onto the main course. 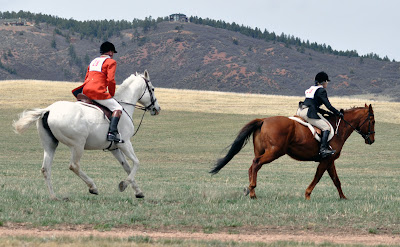 Once on course, the teams were required to ride to a series of destinations or "points".  At each point, the team received a chip from an event official.  At the end of the course, the teams turned in their chips as proof of completion.

Unfortunately, most of the points were really far away so this is the best I could do for pictures.  You can see the event officials on foot near the car.  In addition to handing out chips, they also spent a lot of time making sure riders were headed in the right direction! 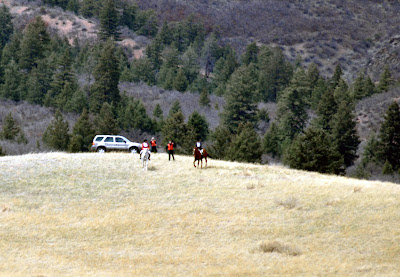 The course was officially completed when the nose of the trailing horse of the team crossed the finish line. 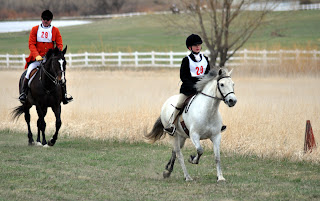 Each Point to Point division (Local Hunter, Master's and Huntsman's) included a Trotting Race.  As you would expect from its name, the trotting race was all about trotting.  Competitors who broke into a canter were required to circle before continuing on, and the team with the fastest time was declared the winner.  None of the Trotting Races incorporated jumps into their courses.
The Huntsman's Division offered another, more challenging race--the Arapahoe Challenge Cup.  Teams competed over a three to four mile hunt course with mandatory jumps that were not to exceed two feet three inches in height.  This picture shows one of the teams racing down the hill toward the finish line. 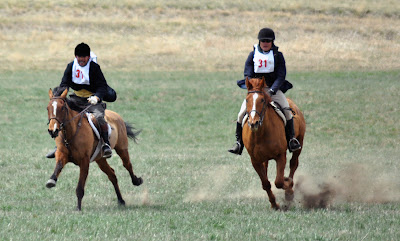 In addition to a race, each division also had a "Pace".  In this event the winner was not the fastest team but the team who finished closest to the predetermined "ideal" time.  In the Local Hunter Division, this was a walk/trot event called the Cross Country Pace.  The Master's Division included a similar walk/trot event called the Hilltopper Pace.  The main difference between these two was that the ideal time was announced prior to the start of the Cross Country Pace.  In the Hilltopper Pace, the time was not announced beforehand and the teams had to figure out for themselves what speed was most appropriate.  The Huntsman's Division had the Cherokee Pace which was a trot/canter class with an unannounced ideal time.  All three of these classes included optional jumps. 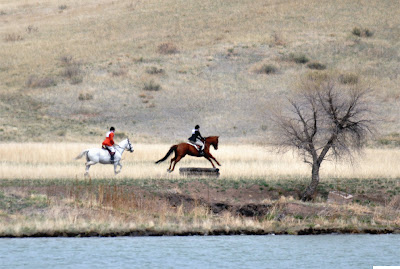 The third type of class, Handy Hunter, included common hunt situations such as gates, trail obstacles and water.  This made it especially interesting--so much so, that it will get a post of its own tomorrow!
Posted by Braymere at 2:33 PM