After I'd finished judging the Over Fences class at the Show for the Cure, one of the competitors came over and asked why her entry hadn't placed.  Her model was beautifully outfitted in a full set of Corinne Ensor tack, his jump was nicely made and of the correct scale and the entry was properly documented.  There was absolutely nothing wrong with that entry except for one thing--the horse was a Breyer traditional Black Beauty. 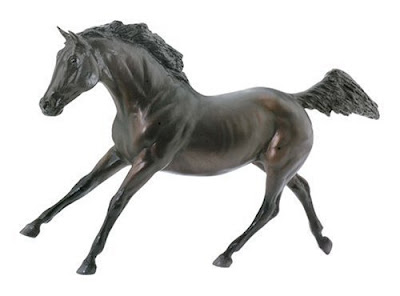 This particular model is a poor performance prospect for one simple reason--he's cross cantering.  That is, he's cantering on one lead in front and another behind.  This isn't unrealistic per se.  Real horses can and often do cross canter.  However, it's an uncomfortable and awkward gait for both horse and rider and is considered a fault in all disciplines.
Performance showers with real horse experience tend to take this sort of knowledge for granted.  However, a lot of hobbyists come from non-horsey backgrounds.  This shouldn't preclude them from performance ring success, but unfortunately that's often the case.
In an effort to level the playing field, I'm debuting a series of articles aimed to help both novice and experienced performance showers.  The first one will be posted later today and is written by Jamie Stine.  Jamie is a dressage rider who has also groomed upper level dressage and event horses.  Her article will analyze a number of common and not so common models in regards to their suitability for showing dressage.  If you have similar event specific knowledge and would like to share your expertise, please get in touch with me.  I would also be happy to field suggestions for future articles.
Posted by Braymere at 1:31 PM