Dressage for the Model Horse, Part One

Dressage for the Model Horse: A Gait-By-Gait Analysis
by Jamie Stine
Dressage is probably the pinnacle of horse sport when it comes to horse/rider partnerships.  Sure, there are no huge scary fences involved, but a dressage horse and rider have to have a dynamic, living, breathing partnership and almost be able to think the same thoughts at the same time to be successful.  That makes dressage pretty intimidating for some real horse people…
And model horse people seem to think the same way!  Dressage requires a huge setup, and specialized knowledge, and lots of preparation!  Well, not quite.  I mean, yes, it does help if you’ve done your research, but there are lots and lots of models that are suitable for a dressage type setup, both OF’s and Resins.  And of course you can have a dressage horse customized into just about any gait or position you want.
What I’m going to do in this series of posts is analyze some common (and not so common) OF’s and AR’s for their dressage potential.  I’m going to do it gait by gait, since that seems to be the most logical way to arrange things, and for specialized things like extensions or pirouettes, or half passes, I’ll do those within the gait that the horse is performing.  (Deputed Duke, for instance, is doing a Trot Half Pass to the right, so we’ll discuss him under trot; make sense?)
The Halt:

The halt is a movement performed at least once in all dressage tests, from Introductory Level all the way up through Grand Prix Freestyle.  Its purpose is to test the obedience of the horse to the rider’s seat/weight aids, as well as the connection with the bit.  This being said, a good halt has the following qualities:  it retains it’s forwardness (that is, the horse is poised, ready for the next cue, but stands attentively), it is calm, the horse remains on the bit (flexed at the poll, not leaning into the rider’s hands), and the horse’s weight is evenly distributed over all four feet (he is standing square).
There are many model horses that are standing on all four feet, but there are very few who could be said to be in a “proper” halt for dressage.  HOWEVER, halts at introductory level (or green as grass level in some parts of the country), do not need to be square, and are not expected to be anywhere near on the bit.  So Matriarch, Lady Phase, and other “standing attentively” models may be shown in dressage with the caveat that they should be shown at Intro level.  The Intro level tests are not difficult to find, and this gives those “standers” an opportunity to show in performance other than showmanship or trail.
A horse like Jamil, on the other hand, though standing attentively, isn’t really paying attention to his rider; he’s looking off into the sunset at puppies, or balloons, or someone on the sidelines with an ice cream cone.
The Ideal Stock Horse also has this issue.  They’re lovely horses, they’re just not poised for their next move the way they should be.
The G3 Standing Thoroughbred, while not completely square, is one of the best OF dressage horses there is when it comes to minis.  He’s on the bit, he’s paying attention to his rider, and he looks like he’s ready to step off into whatever happens next.
Another very decent OF horse that could be shown in dressage is the Bouncer pony.  Though he is not quite square, he’s nicely on the bit and paying attention to his rider.  He is slightly flexed to the left though, so that’s something to be aware of when choosing a dressage test. 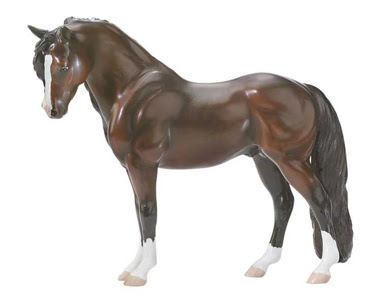 The Walk:
There are tons of walking models out there, and several of them can be shown quite successfully in the model dressage arena.  An OF that comes to mind immediately is John Henry.  Even though the older ones are wonky and lumpy and have weird legs, he’s doing a lovely free walk, with his hind leg coming up under the rider’s seat, and his head and neck stretched out towards the bit, but he’s obviously still holding contact with the rider’s hand.  This is exactly what a free walk should look like.
Another quite lovely walking model is Romke the Freisian.  Romke is on the bit, walking forward, but not quite as forward as John Henry.  I’d say Romke is doing a working or collected walk, which are movements called for in Training Level to Grand Prix.  Working (or Medium) walk is the standard walk used in US dressage tests through 3rd level.  The first time we see collected walk is at 4th level or Prix St. George.  Romke is more suitable for lower level dressage classes because he’s not quite “sitting” down on his haunches enough to be an upper level horse.  I’ll explain this a little further when we get to trot.
Horses like Lonestar may be shown in dressage as well, but you’ll have to get a bit creative with his positioning.  Lonestar is walking, yes, but he’s not really walking with purpose, he’s just kind of dawdling along, looking at the birds or what have you.  Now, again, you can show him in Intro level or with a child rider, and this should be fine with an explanation card, but he’s not really suitable for Upper Level dressage by any stretch of the imagination.  If you need to get him in more classes for his division or overall championships though, then dressage is a good bet with documentation and a good explanation card.
Mozart by Frank is a wonderful walking mini if you can get your hands on one.

So is Handsome Devil, though he’s huge and will require his own tack set, which makes things a little difficult for some people to manage.
Rayne, by Fraley, is in a nice forward walk with a long neck .  He’s Little Bit scale, so bigger than standard mini scale, but definitely gives those mini showers something to work with.
Stay tuned for tomorrow's post which will cover trotting and cantering models!
Posted by Braymere at 5:01 PM