Erin Corbett sent me a link to the following show report which was originally published on Model Horse Blab.  She gave me permission to nab the photos for my blog, but the post was so awesome that I decided to reprint it in its entirety.  Hope that's ok, Tracy and congrats on your big victory!
Northwest Expo Report
by Tracy Eilers
I proxy showed Erin's performance stuff for her, so I stumbled out of bed before 5am this morning, purchased an enormous iced coffee, and drove down to Corvallis this morning! I haven't really shown performance in nearly 10 years, and only got one partial trial run a year and a half ago with another of Erin's horses when she was still there to help with my freakouts. Today, the training wheels were off and I was on my OWN.

Here is a partial shot of the show table- pretty sparse, eh? 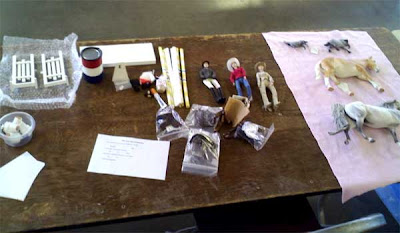 First up was English Pleasure. I sucked at that (4th & 5th), and got some good comments from the judge on how to improve when I asked her. Thanks for being kind enough to explain stuff, Elizabeth! Next up, English Trail. Granite got 1st "keeping an even cadence" over the pole fan, heehee! 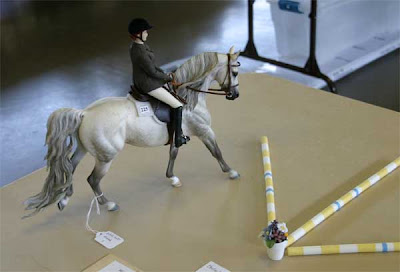 Jasmine is 3rd with her hippie mule trail setup. 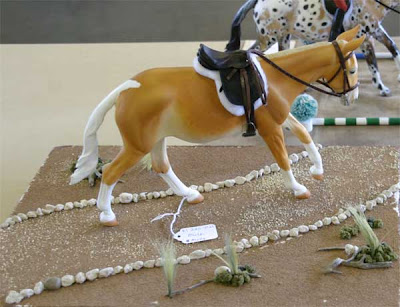 Next up was H/J, so Jasmine got a little hunter hack setup and won 2nd! Granite sat this one out so Jas could try and get NAN Q'd. Sorry for the lame camera pic... I was text-to-email keeping Erin in the loop with pics and results as the show was going, which is free for both of us to send stuff to/from the Netherlands! 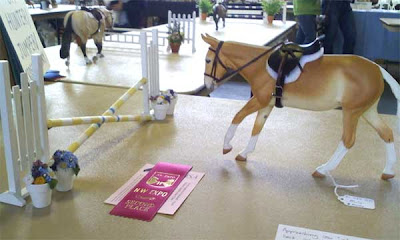 I suck and didn't get a pic of Other English Perf stuff, but I think Jasmine was doing English Games going to grab an Easter Basket (which is adorbz) and I can't remember if I even put Granite in doing anything...

Anyways, Jasmine got Honorable Mention in the English Championship! Hooray! No pics of this, because my mom came to visit for the show (she lives in Corvallis) and picked up her ribbons after the champ and I was starting to try and do tack changes to western, and then said "hey, whats this black ribbon?"

Amy Widman's mom was there too, so it was Mom's Club! Both our moms wore little brooches on their left lapels, how cute is that?

OK, after some general freaking out and trying to fit tack on stuff, it was a frustrated dash for Western Pleasure. The saddle on Jasmine has a girth made for a draft cross.

Sooo, had to cinch up both sides all the way up and hope for the best. It was a HUGE class, so she didn't get jack, but Granite did a repeat of his NAN win in WP and won the class with the same saddle. It's a smaller copy Erin made and gave to me that is the silver and tooling pattern of my real western show saddle!

(no I don't show/own a horse anymore 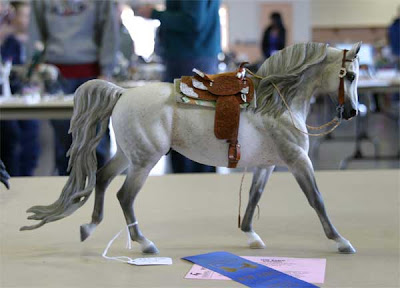 Western Trail I switched saddle sets for, trying to NAN Q Jasmine in Western and only had time to readjust her set. It fit WAY better, but it was a really tough class! She got 3rd loping a pole fan that she found "amulesing" per the documentation

Last class! Other Western had Jasmine finally using the arena wall that had thus far been unused. She was set up for Western Riding with her cone and willing attitude for lead changes! She got 3rd... 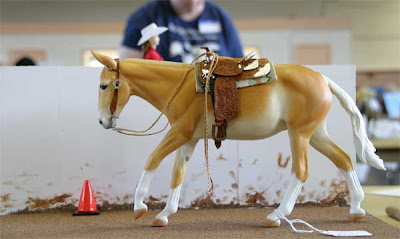 and the underdog Granite in my practice barrel run setup in the navajo inlay set + doll won the class! Jasmine was thusly thwarted, but there will be other shows to qualify her at. 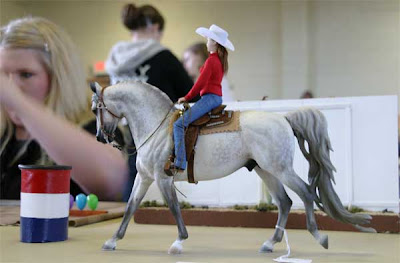 The championship class had some really neat entries, and I was WOWED to see that Granite won Champion Western Perf with his two blue ribbons! 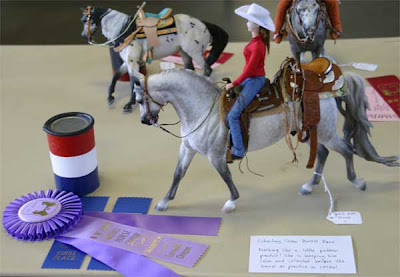 The show broke for lunch, so my mom and I sat with bated breath for Elizabeth to scarf her food and do the Overall CM Perf Champ. I hung out with mom chatting and packing up my stuff. I had to leave Barley (dog) at home today, so needed to leave after perf was over and zoom home to take him out. I was talking to Laura Pervier while the champ was being judged, and mom started squawking that she thinks I won something, LOL! I looked over, and there was a pretty rainbow ribbon sitting next to Granite! 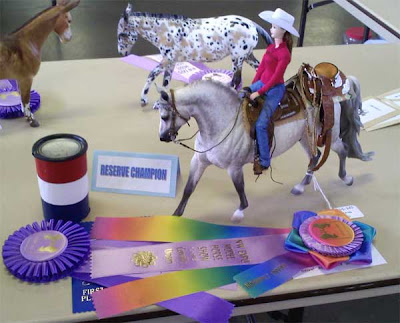 After driving home the hour and forty minutes, I took the dog out and then took a NAP. That was exhausting, but really fun! Thanks to Erin for letting me show her awesome stuff and to Traci Durrell-Khalife for a fun show!


And thank YOU, Tracy, for the most "amulesing" show report I've ever read!