When I was ten and a half years old, I started taking riding lessons at Eaton Canyon Riding Club. Despite it's rather exclusive sounding name, this was a large, slightly run down, public riding stable with an active lesson program. Every six months or so, the stable would host a schooling show for boarders and students. Naturally, I wanted to participate. 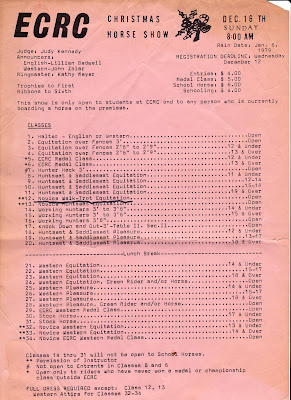 My instructor, Ann, helped me sign up for a Novice Walk/Trot Equitation class. I was allowed to ride one of my favorite school horses, Holly. 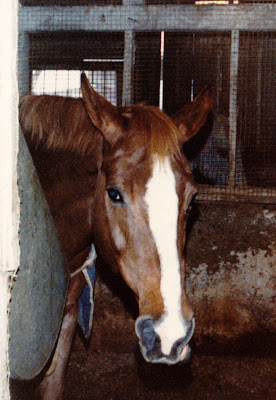 It didn't go well. There were seven entries in the class, and I tied for sixth. My older sister pointed out that I probably should have placed seventh but the judge felt sorry for me. Yeah, thanks.

Fortunately, I did improve over time. 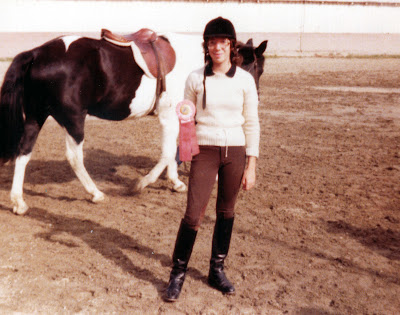 Green pity ribbons gave way to pink, white and yellow ribbons. I wasn't exactly wowing the judges, but at least I was no longer the worst rider in the ring. 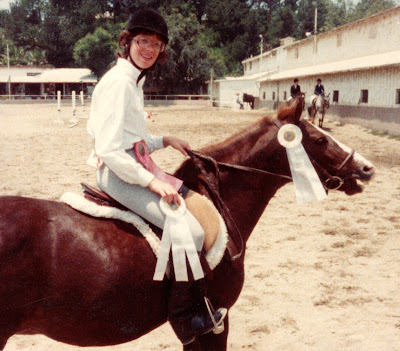 And although I desperately wanted to win a blue ribbon just one time, I was a practical child. I knew that a once a week lesson kid riding school horses and borrowed ponies had little chance of beating girls who rode six times a week, owned their own horses and had actual show clothes. 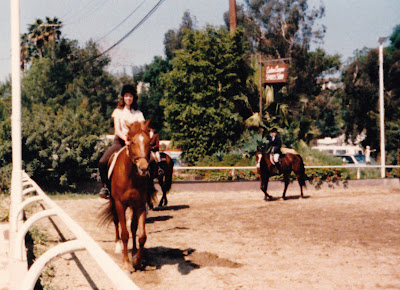 I tried and tried, but I never did manage to win a blue ribbon at Eaton Canyon Riding Club. However, I did earn top honors elsewhere. 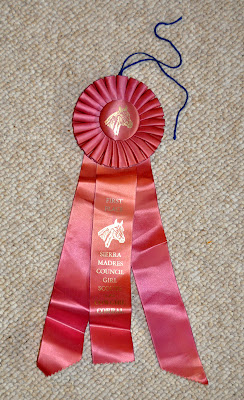 Time has not been kind to this formerly blue ribbon, but there's no mistaking the inscription on the middle streamer. Once--just once--I did win First Place in an actual riding competition. 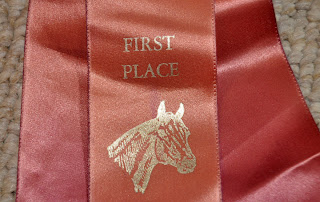 It happened the summer I was twelve. That was the year, I persuaded my parents to allow me to attend the Sierra Madre Girl Scout Council's "Cowgirl Corral" day camp. 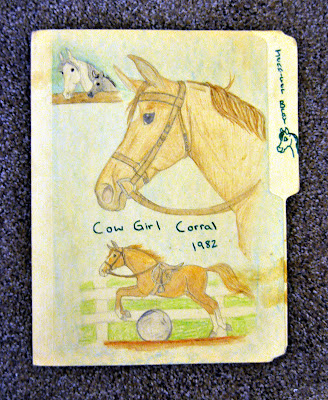 The camp was held at Arroyo Seco Stables in South Pasadena.
In addition to lessons and boarding this barn also rented horses by the hour. It was decidedly less upscale than ECRC, but I didn't care. For one glorious week, I got to ride horses every single day in the big arena under the bridge. 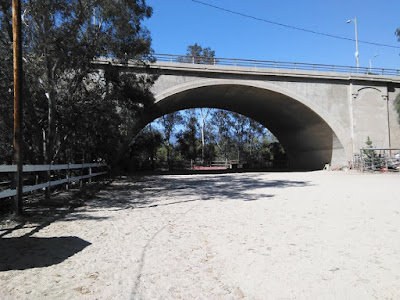 On the last day of camp, there was a competition to determine the week's All Around Champion rider. This included a written test on general horse knowledge and a two class gymkhana. At the end of the day, all three scores were combined to determine the winner.

Predictably, I aced the written test. After that I climbed aboard a horse named Indian and earned a good but not great placing in the Egg and Spoon class.

The last event of the day was a class called Ride and Tie. Like the long distance sport of the same name, the Ride and Tie race was a competition which paired two riders with one horse.

For the first time in my equestrian career, I knew this was a class I could win. I may not have been the best rider or the fastest runner, but there was one thing I knew how to do like no one else. I could tie a quick release knot. 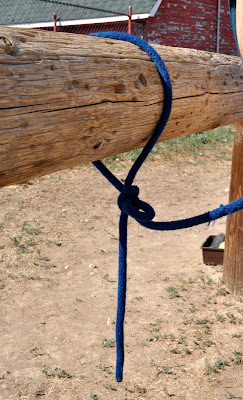 And that's what it came down to in the end. I rode first and when it was time to dismount and tie, I was able accomplish in seconds that which took other teams several long minutes. My teammate and I won the class, and I was awarded the All Around Champion ribbon. 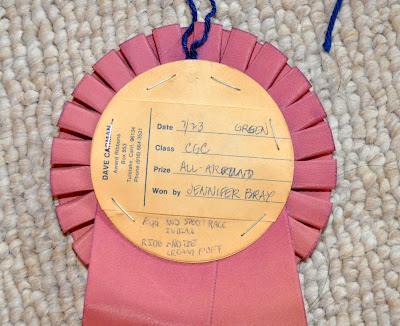 All my other riding ribbons have long since been discarded, but this one remains. It may not represent much in the grand scheme of things, but it seemed like a big deal at the time--my very first blue ribbon.
Posted by Braymere at 2:58 PM