At the beginning of our eighth grade year, my on-again, off-again friend, Dawn, leased a pony named Cinnamon from a local day camp. She boarded the pony at Eaton Canyon Riding Club, which was just half a mile from my parents' house. Together, we visited Cinnamon a few times, but it was obvious, at least to me, that Dawn had very little interest in riding. 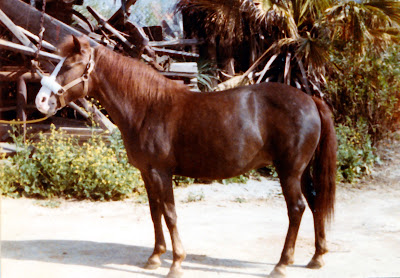 Sure enough, a few months later Dawn approached me between classes and said, "If you're ever at the barn, you're welcome to ride Cinnamon."

"What if I'm there every day?" I asked eagerly.

She rolled her eyes and sighed. "Whatever."
I found myself at the barn almost every day for the next six months. It was glorious. 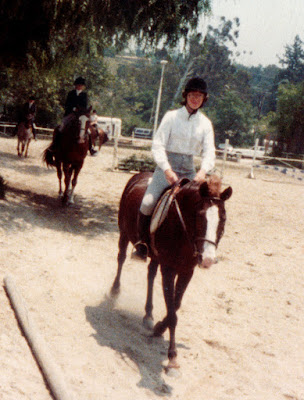 Before I knew it, it was time to return Cinnamon to the camp. This would have been unbearable, but fortunately, I'd managed to finagle a junior counselor position on the camp's horse staff. Cinnamon and I were going to camp together, and I was equal parts sad and excited as I led her up the ramp onto Kathy's trailer. It wasn't until we were halfway to La Canada, that I learned that our destination wasn't actually Tom Sawyer Day Camp. It was, instead, Flintridge Riding Club.

This was a huge and exciting piece of news. I may have been an underfunded barn rat from a rundown public stable, but I had big riding dreams. I knew - everyone knew - that Flintridge Riding Club was the premier hunter/jumper facility in the area. It was where Anne Kusinski had learned to ride. It was where Susie Hutchison still rode. Most importantly, it was the home of legendary trainer, Jimmy Williams. 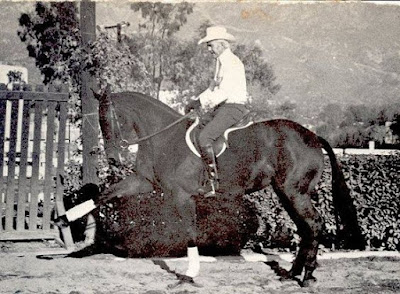 And I knew - everyone knew - that Jimmy Williams was pretty much a god. 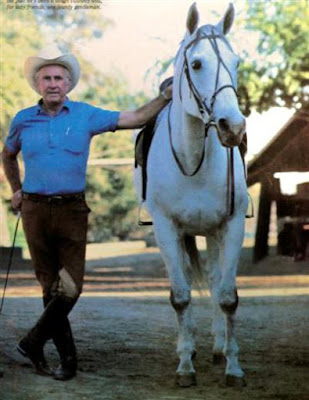 I spent the entire drive envisioning Cinnamon's grand new home, but instead of turning into the Club's elegant front gate,

Kathy drove us up a little driveway on the other end of the property. 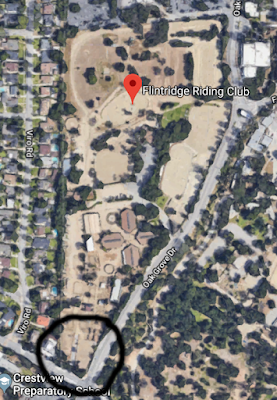 We unloaded Cinnamon into a dirt corral that was bordered on two sides by busy streets. 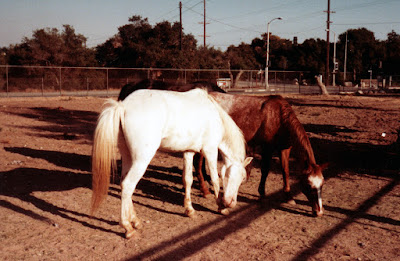 It had the same pipe fencing as Eaton Canyon Riding Club and a couple little shelters for the horses to share. It wasn't fancy, but it was fine, and I was too excited about meeting all the other camp horses to care much anyway. I figured there would be time later on to tour the rest of the facility and, perhaps, to see Jimmy Williams in the flesh. 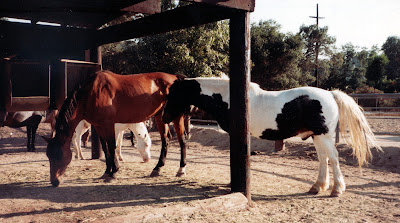 On the first day of camp, however, it was made abundantly clear that neither of those things were going to happen.

"The horses live here," we were told, "but you are not members of Flintridge Riding Club. You may not venture beyond the corral area. The Club facilities are off-limits to you. Even the bathrooms. Plan accordingly."

Every morning, we caught and tacked the horses, then rode them to nearby Oak Grove Park (now Hahamongna Watershed Park), where we kept them until the end of the day. Aside from the corral and driveway, I didn't see a single inch of Flintridge Riding Club, at least not until Captain C got sick.
Captain was a tall, skinny, varnish roan Appaloosa with pink-rimmed eyes and almost no mane. He was not a pretty horse, and looked positively horrifying as he grew sicker and sicker. Flintridge Riding Club got numerous calls about the "starving" horse in their pasture, so they moved him temporarily to a stall in the main part of the property.

We still had to care for him, of course, and that was something I eagerly volunteered to do. I became an expert at finding new routes to and from his stall and lingering as I passed the grooming stalls and riding rings. Every day, I hoped to see Jimmy Williams, but I never did.

Eventually, poor Captain died, and I never again stepped foot on the fancy side of Flintridge Riding Club. Two years later, the camp ended its association with Flintridge. The horses moved across the street to Rose Bowl Riders, which was a better fit for everyone. 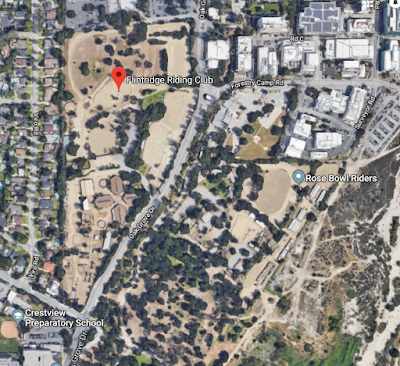 Earlier this year, The Chronicle of the Horse published an expose on Jimmy Williams. 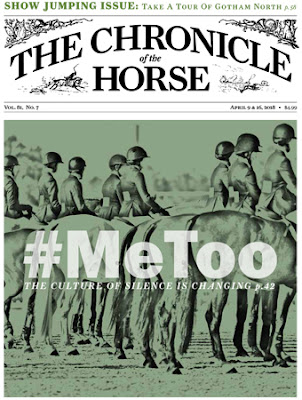 One of the things I knew - one of the things we all knew - about Jimmy Williams was that he was a womanizer. What I didn't know - what I never could have guessed - was that the term "ladies' man" was code for predator, for pedophile. Back in 1983, that summer when I tried so hard to catch a glimpse of Jimmy Williams, I was probably too old for him.

I'm guessing the answer to all these questions is yes.
Posted by Braymere at 7:15 PM