Well, the Jennifer Show is over.

Last week, I moved the Amarant pieces from the piled up side of my work desk to the active making side. The first thing I did was build some internal supports. These allowed him to be free-standing for the first time since I'd owned him. 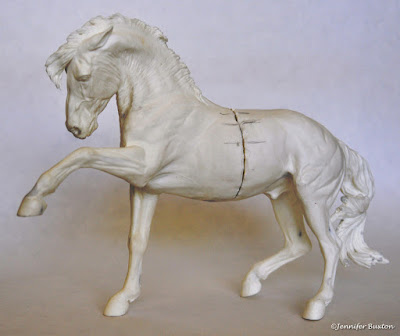 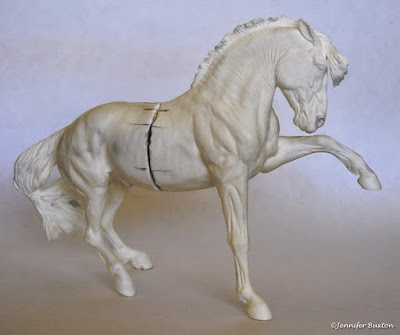 After that, I glued the halves together and covered the seem with epoxy. 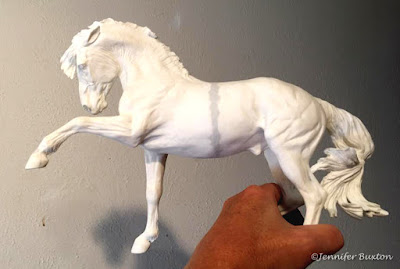 That should have been the end of the customizing, but somewhere along the way, I got curious about the knotted tail. I pulled up Maggie's website and read her description of him.

It said: Amarant is Tumbleweed's tame(-ish) brother. With his cropped mane and knotted tail, he makes me think of a modern-day knight's horse at a renaissance festival. I imagine him as someone's beloved mustang gelding, who still remembers a bit of the wild. His name means "unwilting" or "unfading".

Just like that, I knew that my Amarant needed to be tack friendly. I very carefully carved out spaces between his ears and neck and made - not a true bridlepath - but a spot in his mane where a crownpiece could lie. Then, for good measure, I reduced the bottom of his forelock just enough to allow passage of a browband. The changes are barely perceptible when he's naked, but now he can be tacked up. 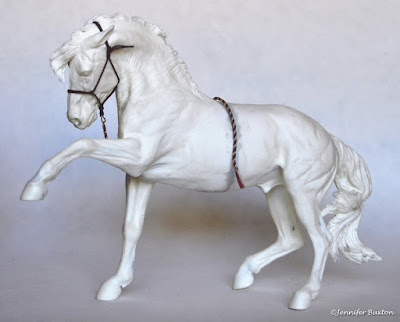 I'm pretty sure he wants to wear a Native American costume someday. 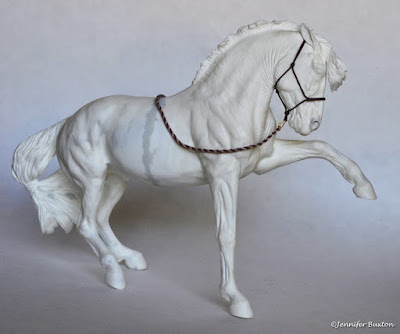 When I first started buying resins, I could only afford project horses. I'm better funded these days, but I still really love the projects. I was so happy to score this Amarant at BreyerFest, and I'm even happier now that he's back in one piece and wearing a halter.
Posted by Braymere at 6:20 PM