As we near the middle of February, more and more NaMoPaiMo models are reaching completion. Whenever someone posts a picture of their finished model, I tell them, "You're a winner!" This is doubly true in Tiffany Purdy's case. She took Jodi Purdy's newly finished Independence resin to the Sleigh Rally Model Horse Show in Columbus, Wisconsin yesterday, and he won his class and was named Overall Reserve Champion of the resin division. Congratulations, Tiffany and Jodi! 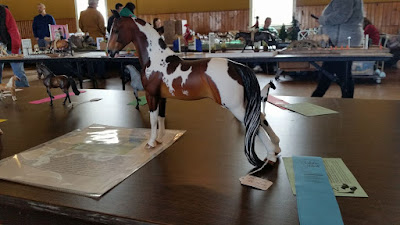 Here's another model that should look familiar to blog readers. This is Stephanie Blaylock's Muddier resin. Stephanie says he's the largest and heaviest horse she's ever painted. She was so intimidated by him, he'd been sitting in her body box for three years prior to this challenge! Congratulations, Stephanie, on moving past those fears and getting him done. He is magnificent! 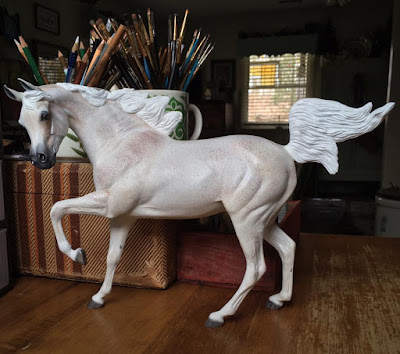 Christine Sutcliffe's HA Truffle resin was also a long time resident of the body box. She writes: This little guy (along with far too many of his friends!) has sat unpainted next to my desk for the last couple of years. Until this challenge, I lacked any motivation to get him painted. I'm so glad I did now though, as I love him to bits. Once I've settled on a name he's going to be a shiny new member of my show string. 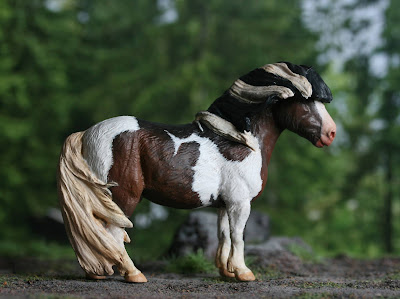 The next winning model is Lynette Sayers' customized Breyer Man O' War. This guy's head was featured on yesterday's Pencil ponies post. As you can see, the rest of his body is just as impressive. Congratulations, Lynette. Man O' War has never looked so good! 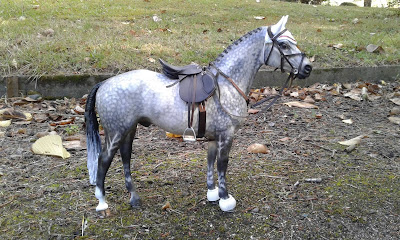 Everyone has different goals for NaMoPaiMo, but the majority are painting related. Not Taylor Ouzts. Here's what she has to say about her NaMoPaiMo experience: My goal at the beginning was to focus on prep work before even laying on the paint. Prepping has never been my strong point so I decided to use this challenge to spend more time on it. I even chose one of the trickiest things to prep; a G1 stablemate. My focus on prep work also extended to an exploration of new mediums and techniques. I was inspired by the use of Pearl Ex by my good friend Malia, and Isaac's electric sander reminded me that I have sanding attachments for my Dremel tool. Finally, by stopping and thinking "Hmmm, how am I going to do this?" more often, I found an awesome new way to do hairing! 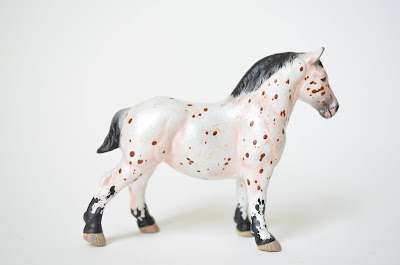 Here's something a little different. The color of Clarice Bone's Family Arabian Stallion was inspired by her favorite anime, and the eye on his head glows in the dark. He's very cool, Clarice. Congratulations on a job well done! 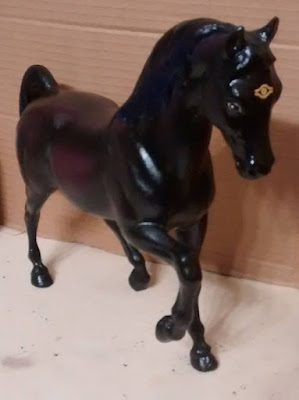 Kari Filipe's Paddock Pal Quarter Horse is next. She writes: I did it! Thanks to NaMoPaiMo I faced my fears and attempted a pinto! He's not perfect, and I definitely see room for improvement. Still, I am very proud with how well he turned out. 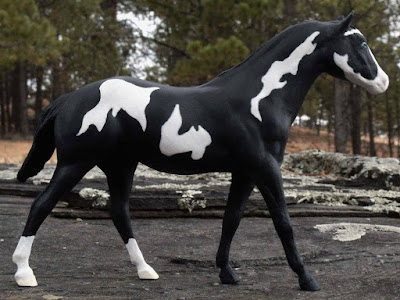 The next winning entry was painted by Sara Davie-Warren. She credits the recent snowstorms for giving her the motivation to finish her NaMoPaiMo model early. You can see more of her work here. 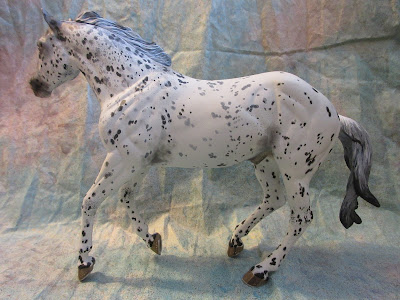 Representing Slovenia, this is Zoja Makovec's customized Breyer PAM. This is Zoja's first dapple grey, and she used acrylics, chalk pastels and a little bit of watercolors. Great work, Zoja! You are definitely a winner. 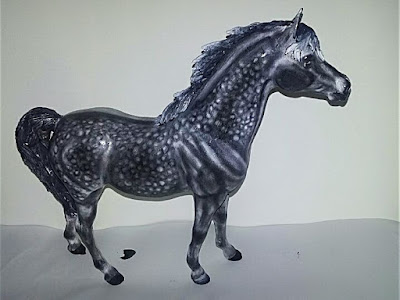 Last but certainly not least is Sara Gifford's amazing Anubis. 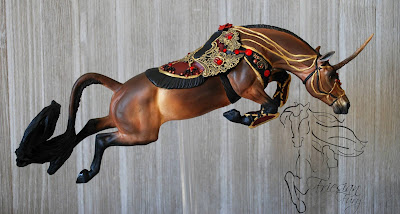 Having been started two years ago, this magnificent model isn't an official NaMoPaiMo entrant. However, Sara used the NaMoPaiMo momentum to push him to completion. She says he is dedicated to her late father, to thank him for all his love and support. 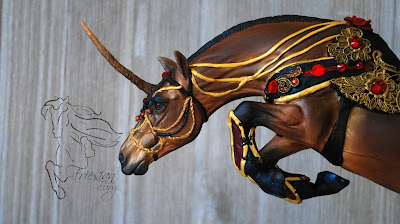 Anubis was created from a Hornet resin, which was sculpted and donated by Maggie Bennett. Sara gave him a unicorn horn, new mane and tail and sculpted tack. He is finished in pastels and acrylics and is currently at auction on eBay. Eighty five percent of the proceeds will go to Our Mims Retirement Haven to support their work with retired Thoroughbred racehorses.

Congratulations again to Tiffany, Stephanie, Christine, Lynette, Taylor, Clarice, Kari, Sara, Zoja and Sara. You are all winners!
Posted by Braymere at 5:18 PM