The Mane Event, part one

James likes horses, but he's not obsessive about it.

He's always eager to go to the barn to walk "his" foal, but once that's done, he's ready to go home.  He doesn't want to linger, and he becomes impatient when I insist on visiting Bob, Santana, Scarlett, Sprite and Goldie before we leave. His horse liking has limits, and he never lets me forget that.

Because of this, I didn't think he'd be interested in sitting through most of the presentations at this year's Rocky Mountain Horse Expo. Discussions about Understanding Collection, Flexion and Suppleness, Building Your Essential Equine Holistic First Responder Kit and Equine Activity Liability, a View From Inside the Courtroom aren't aimed at a casual audience. Those are for the truly obsessed.

Fortunately, there was one enticing option for horse likers such as James: The Mane Event.

Here's how it was described in the program: Ardent for Adalusians or avid for Arabians? A fan of Fjords? The Mane Event includes an alphabet of breeds, disciplines and talents, showcasing horses at the top of their form.  Over 90 horses will perform under the lights in the Event Center at the National Western Stock Show Complex.

Happily, the Mane Event lived up to its billing.  This was a fast moving show with lots of variety. We both enjoyed watching all the different types of horses, and I came away with lots of good performance ideas, most of which I will share in my next couple posts.

The show opened with the singing of the National Anthem. 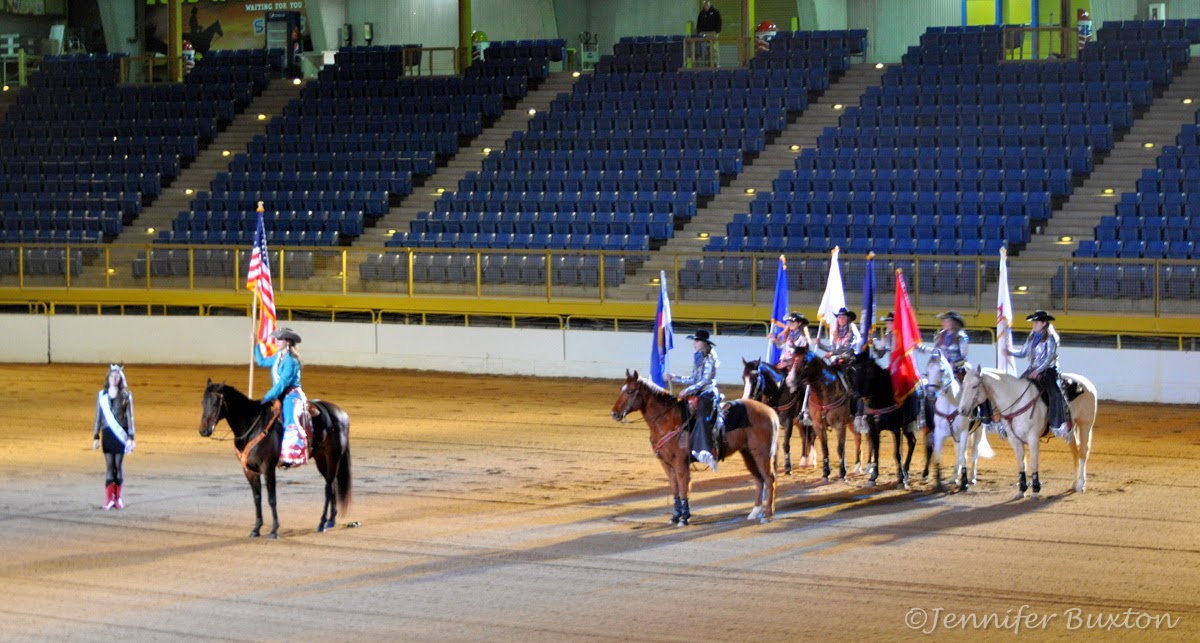 This was followed by a group of riders carrying Garrochas. 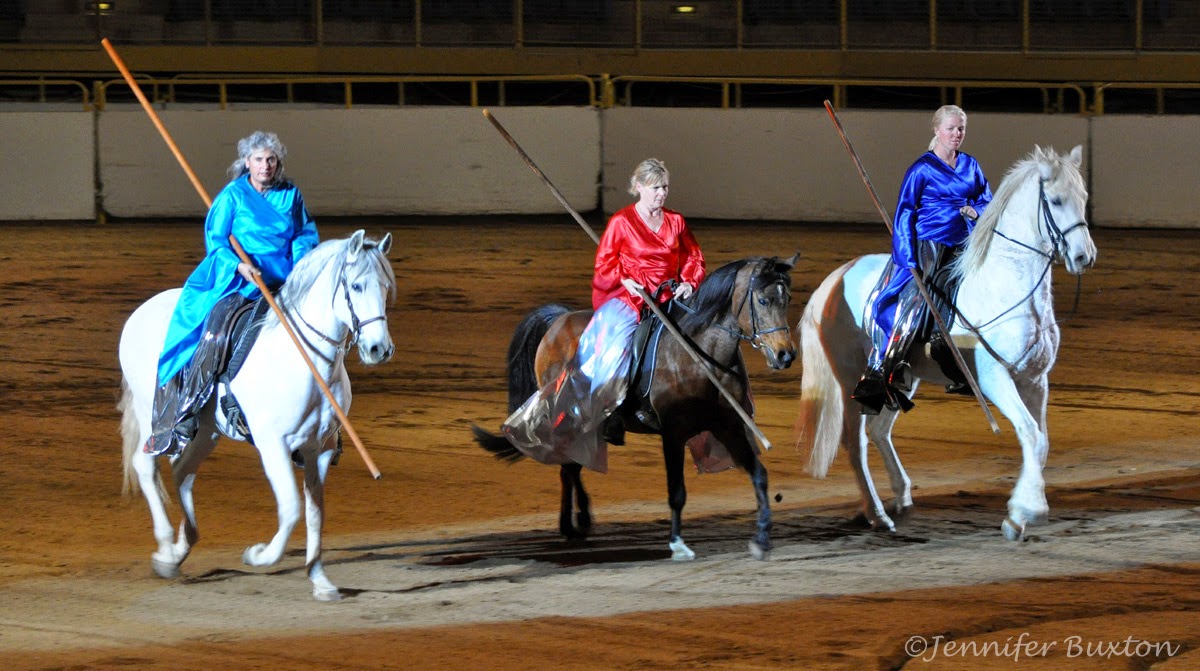 The Garrocha is a lance or pole used by Spanish vaqueros to move cattle. It is occasionally seen in the bull fighting arena and is also one of the obstacles found in Working Equitation. 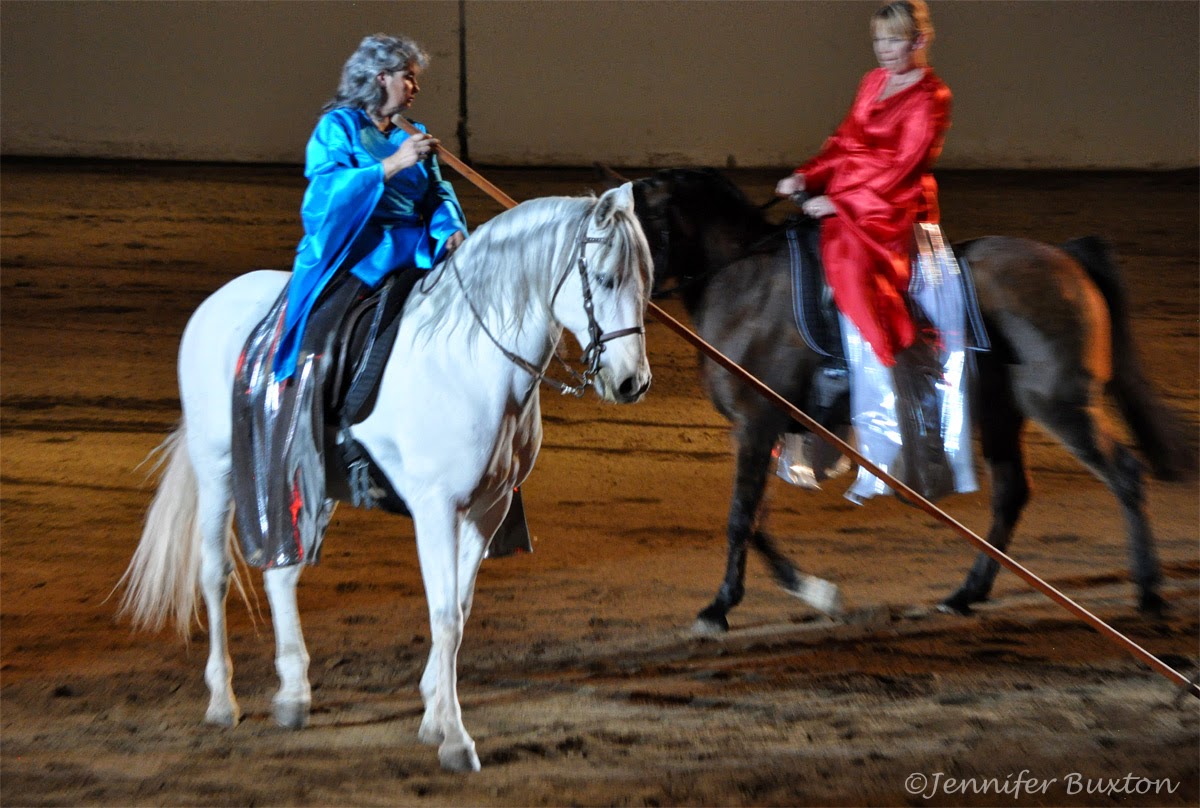 The sparkly Haflingers were next. They performed at liberty to a Beach Boys song. 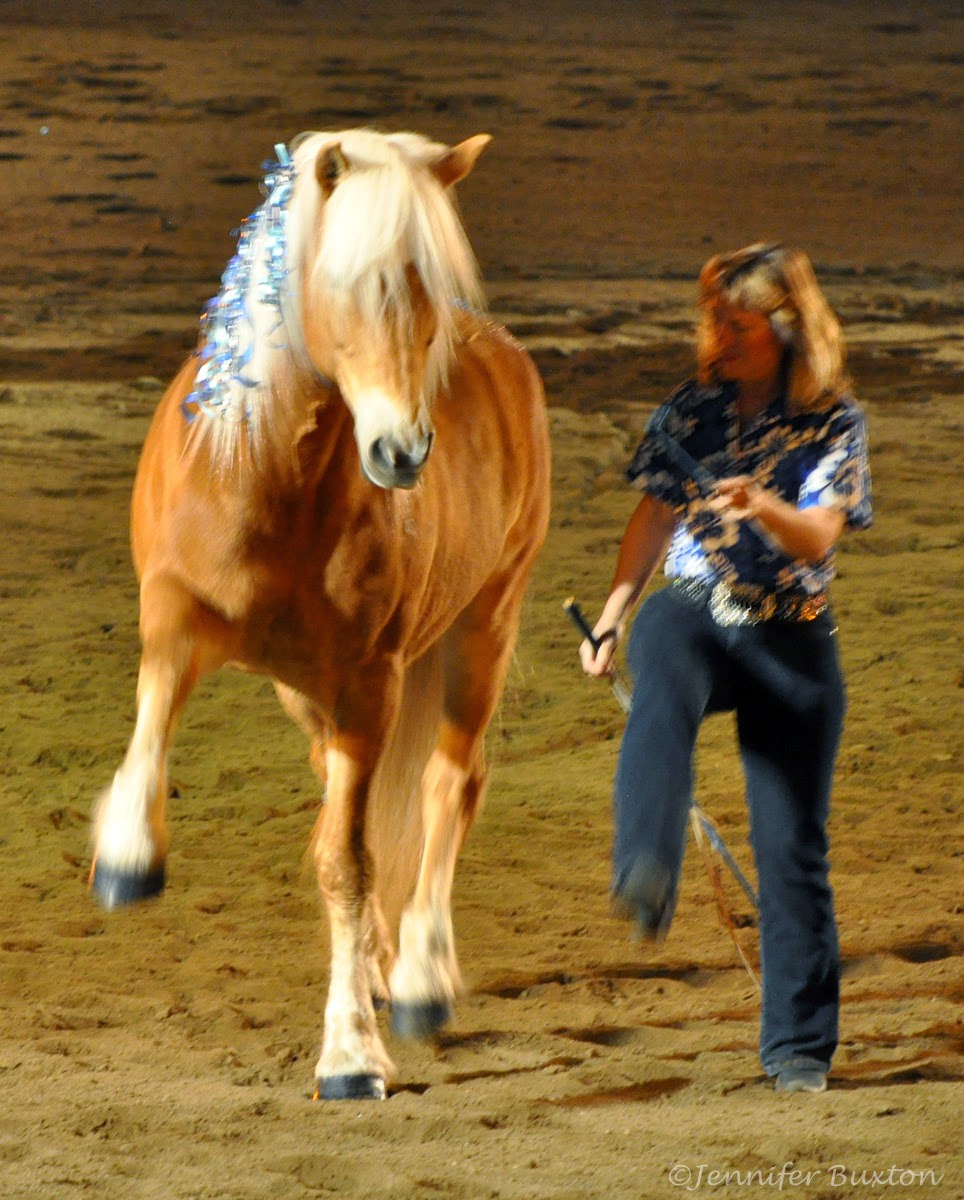 This was followed by a short game of horse soccer. 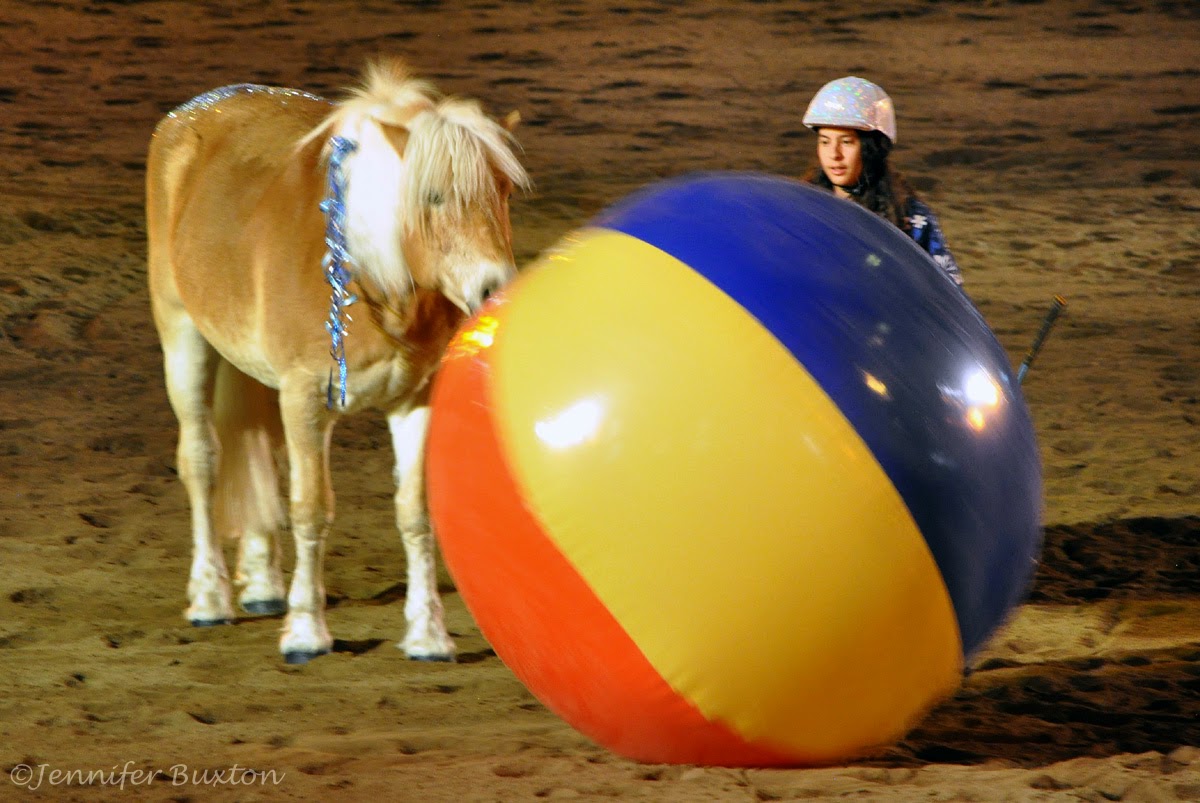 It's entirely possible the handlers enjoyed this... 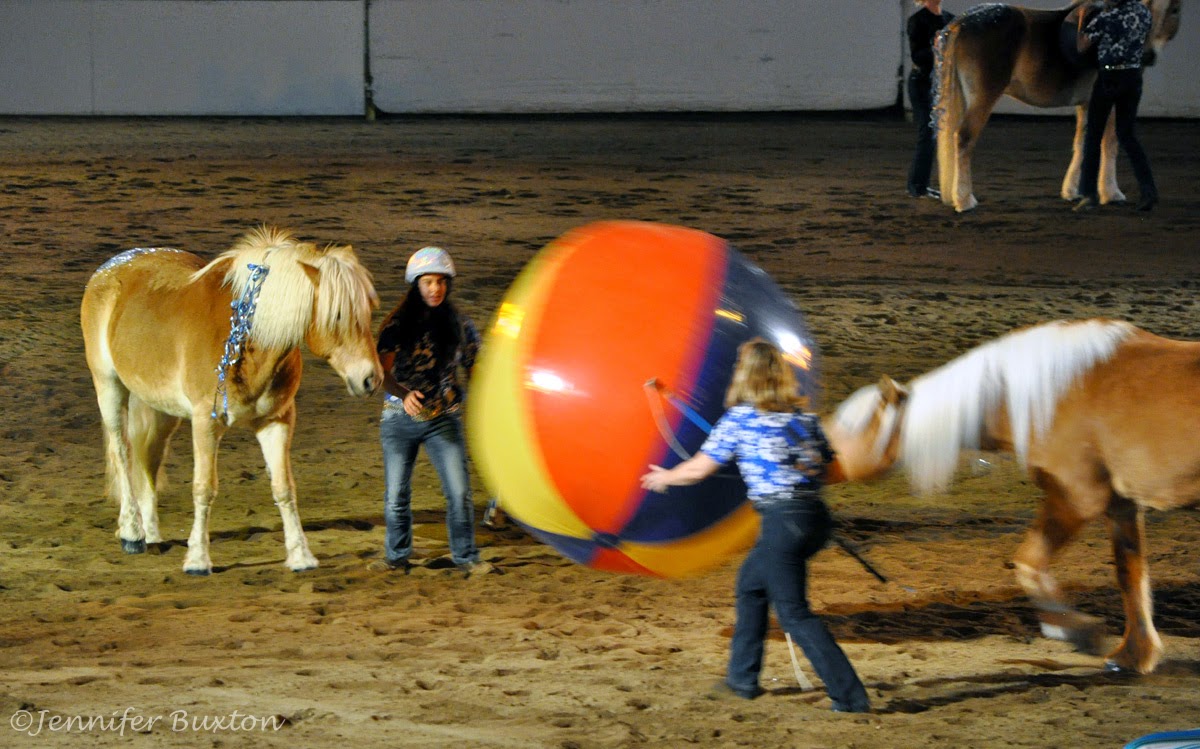 more than the horses... 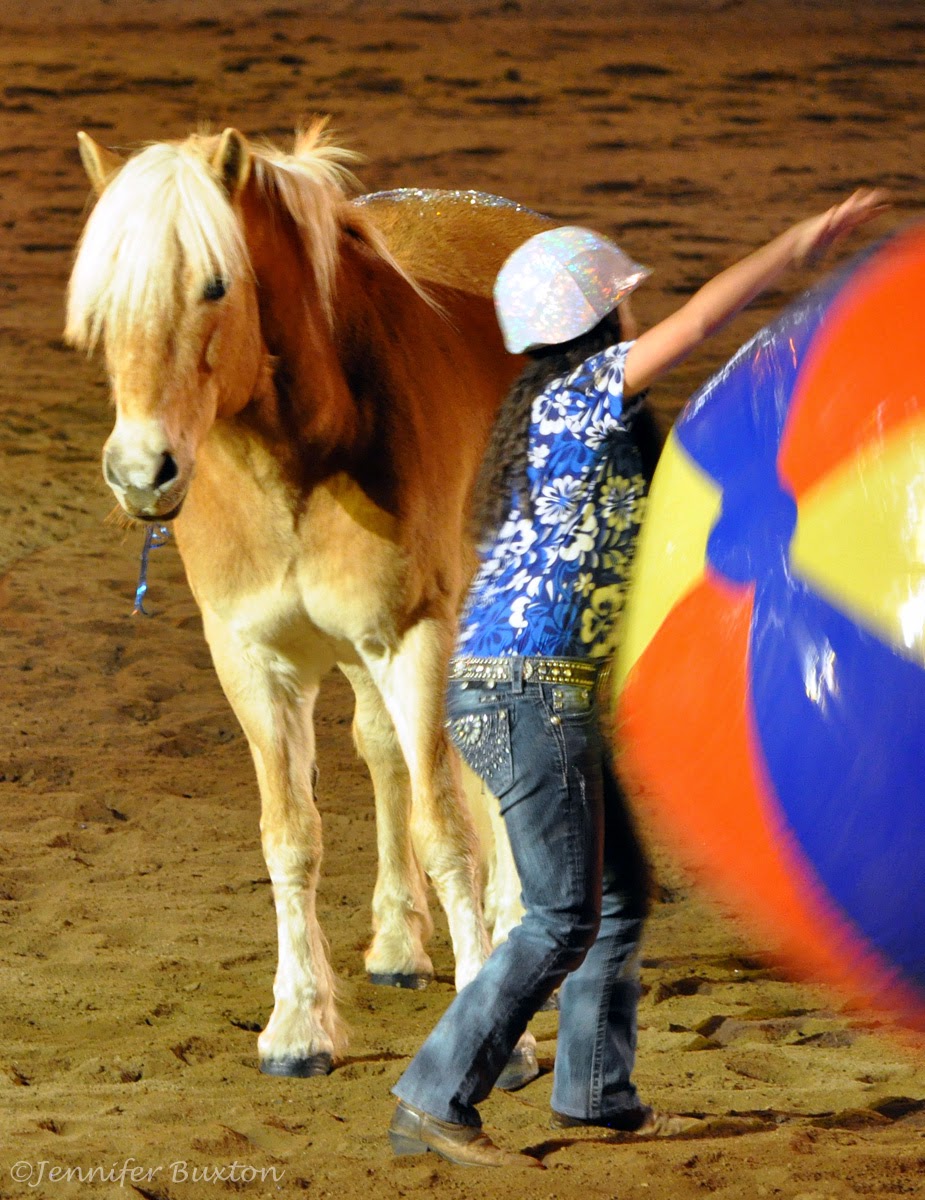 but it was still fun to watch. 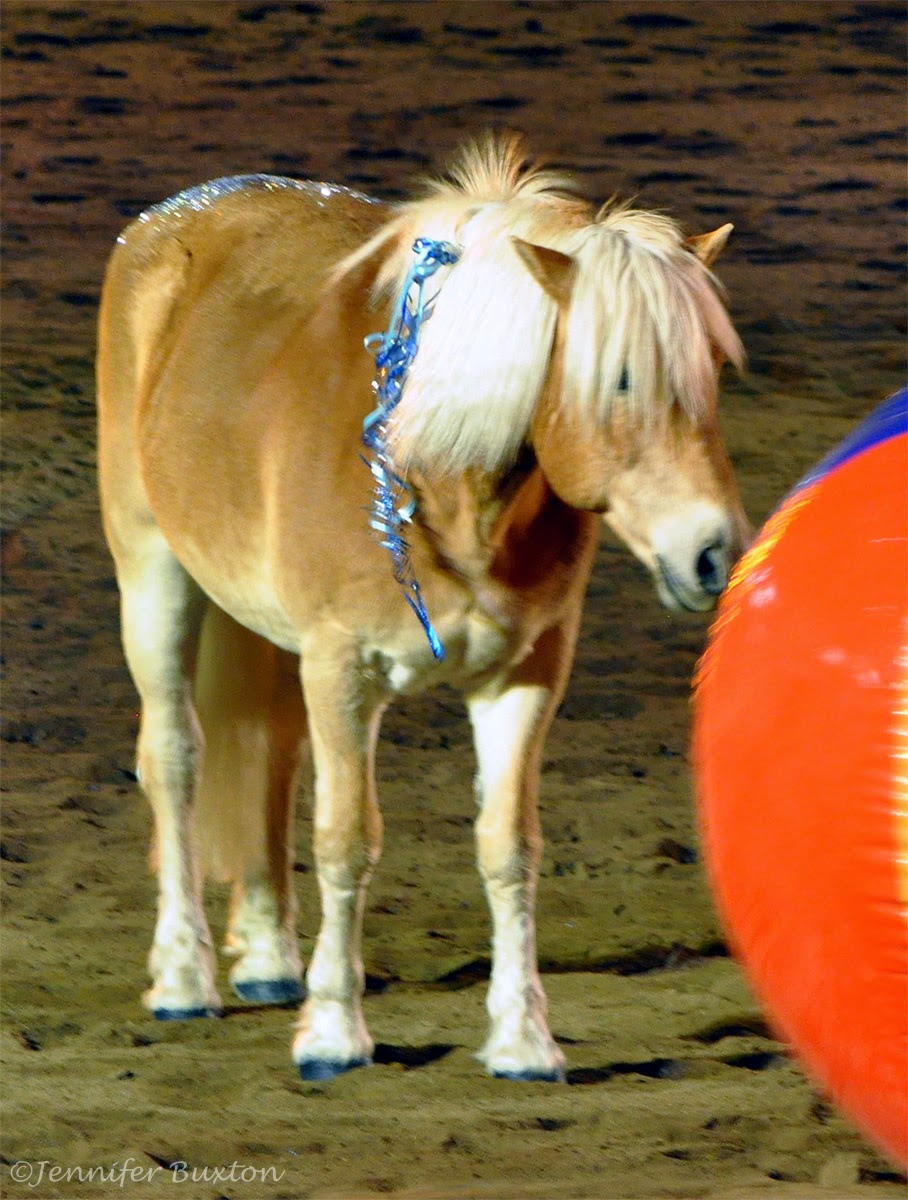 So many good ideas for the saddle-free performance crowd! 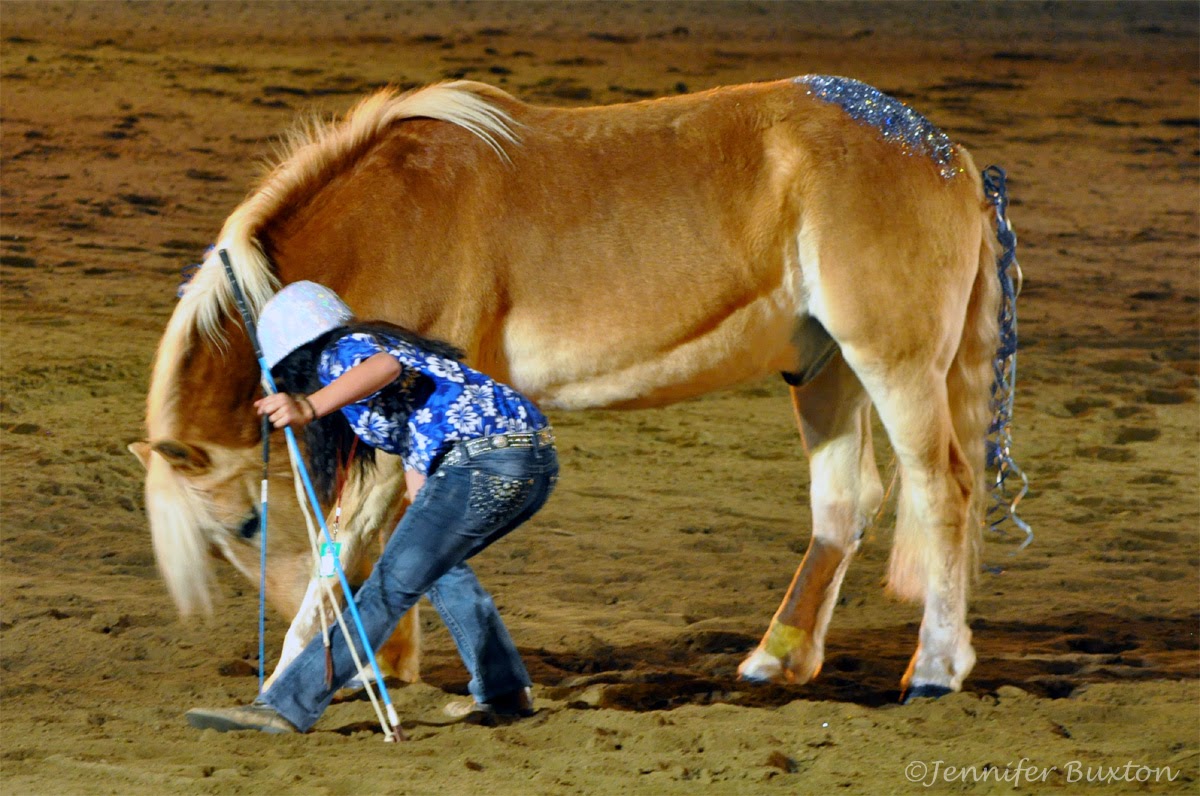 The fourth performance was a one horse "carousel come to life" skit featuring a Tennessee Walking Horse. 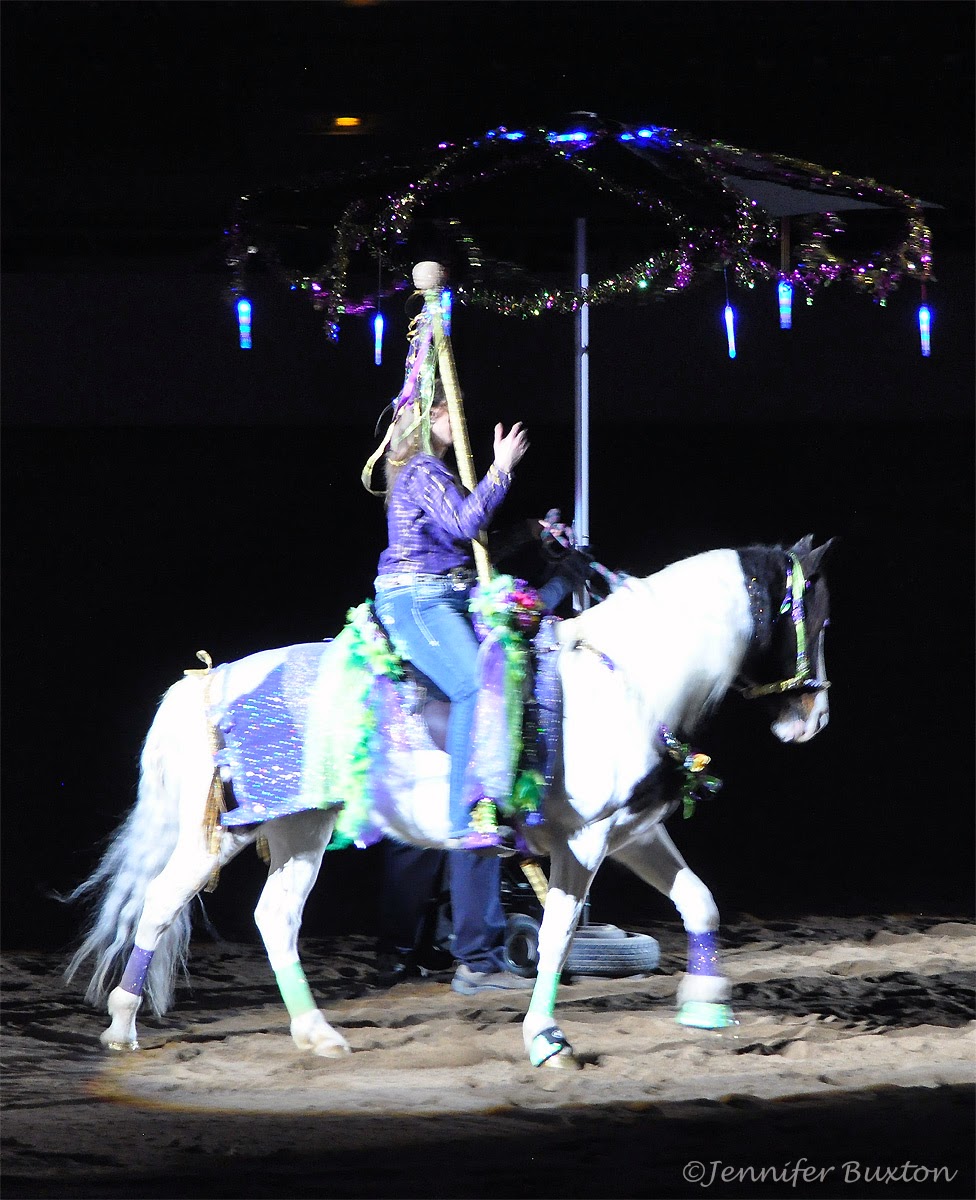 The next group was perhaps my favorite of the night. It was composed of three horses in long reins--an Andalusian stallion, a miniature horse mare and a pony who was half Andalusian, half mini. 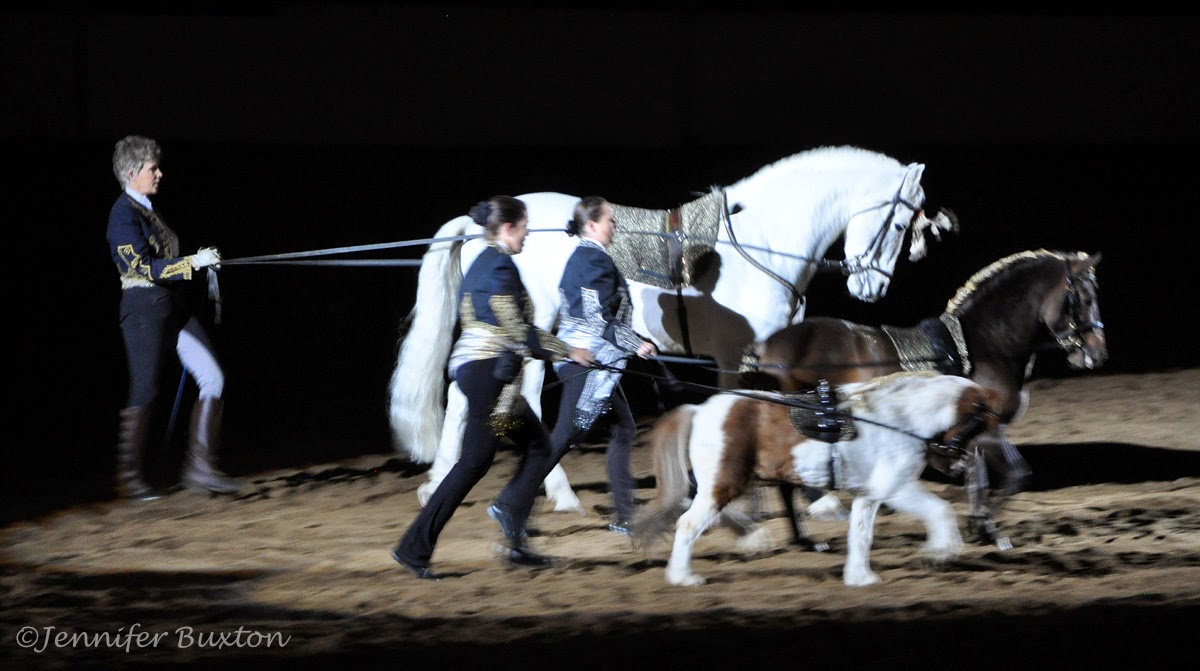 I really, really loved the pony, but unfortunately my camera did not. Try as I might, I didn't manage to take a single good photo of him. 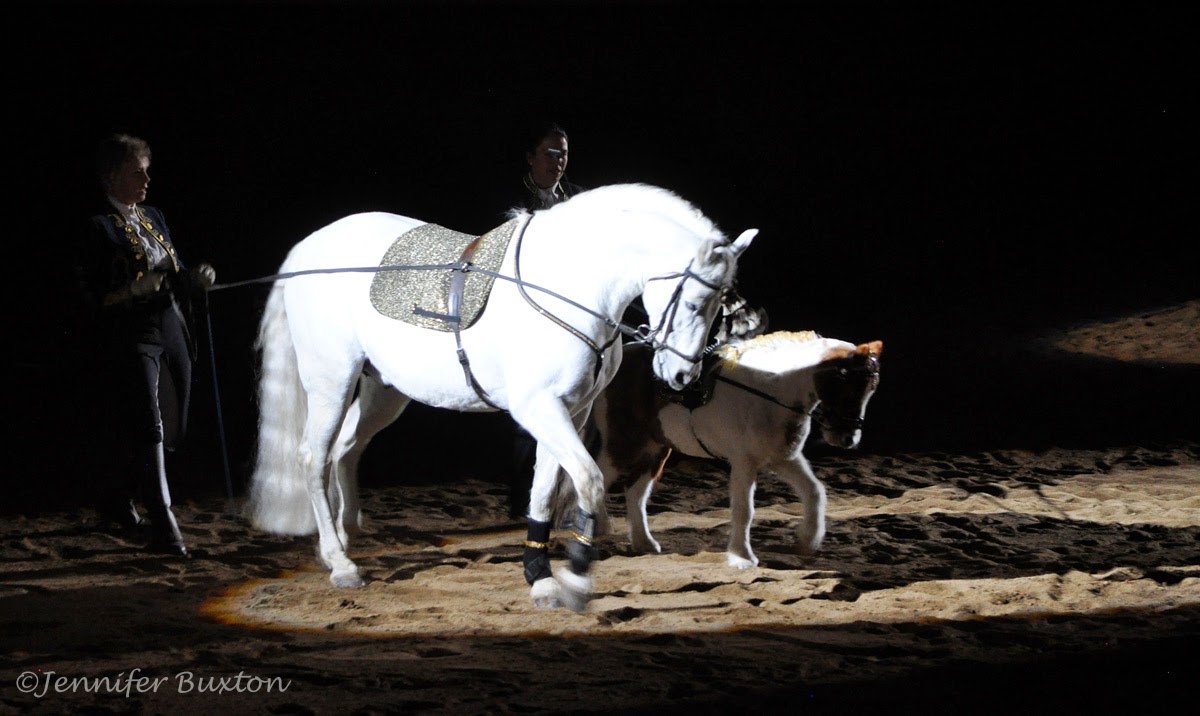 Fortunately, I did better with the mini mare... 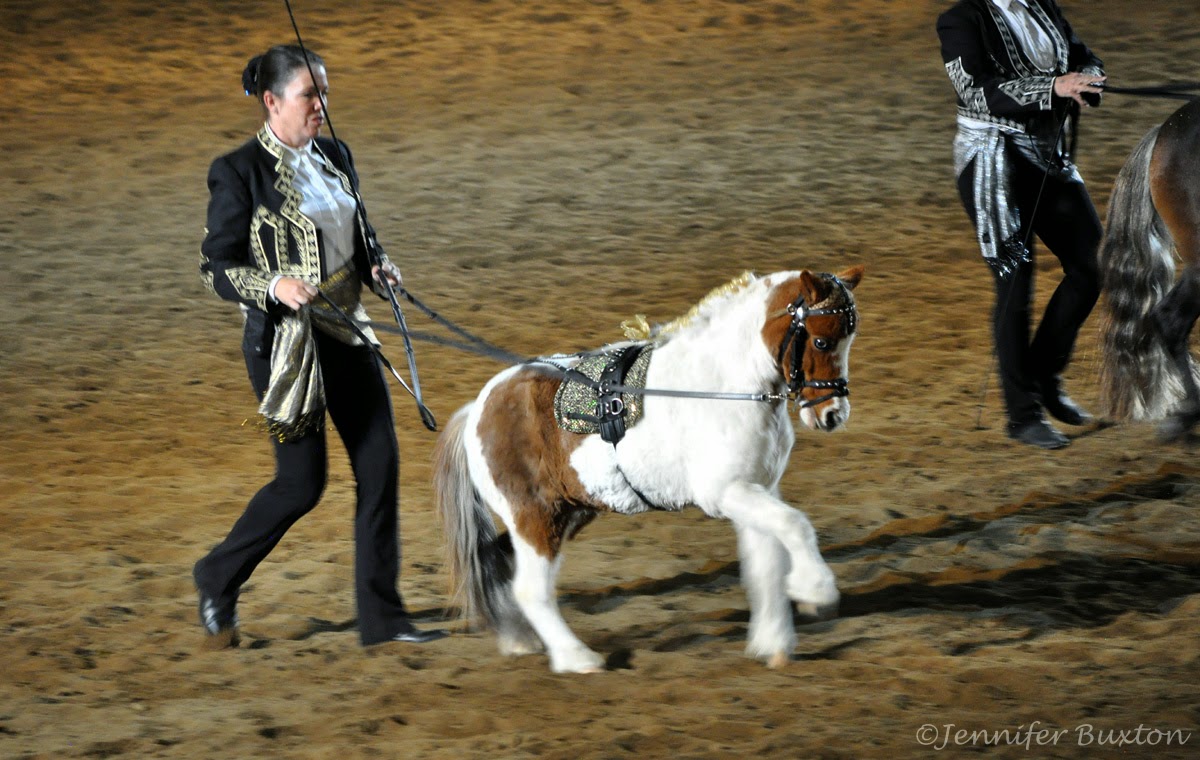 and the Andalusian stallion. 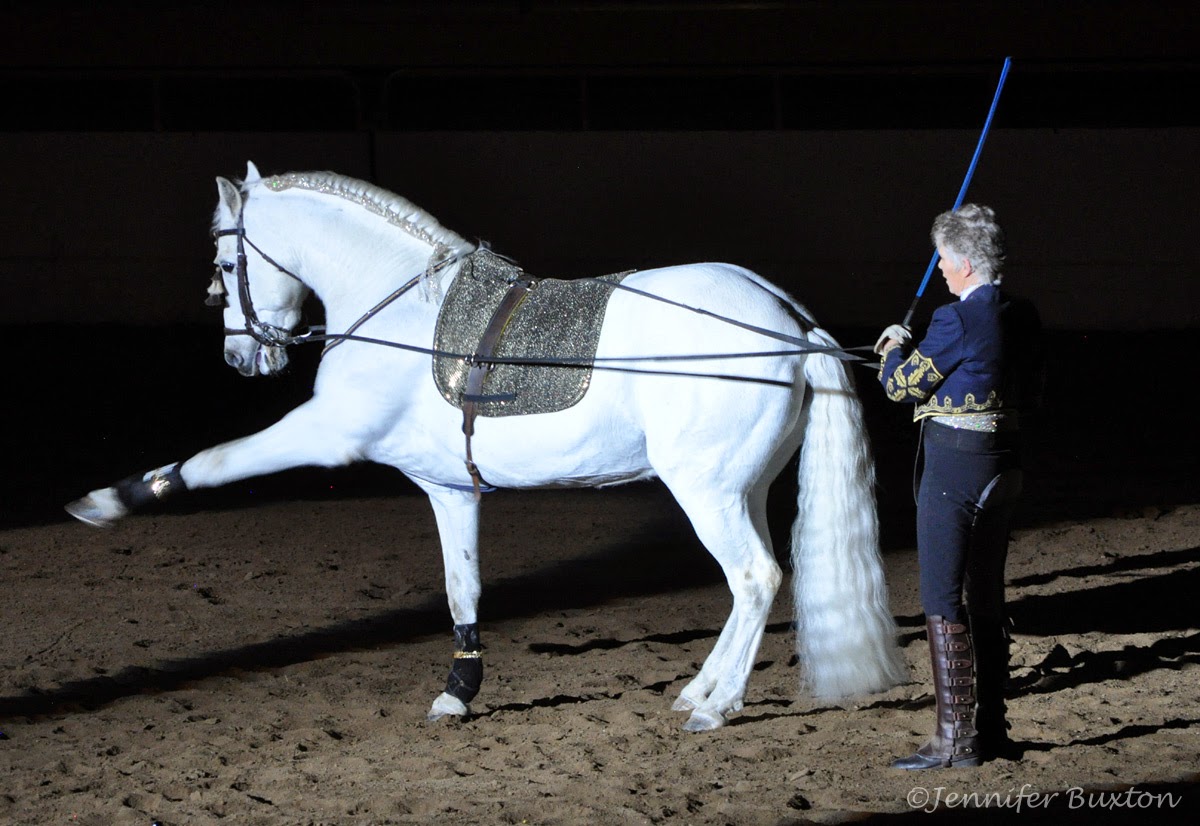 Having created my own long reining set earlier this year, this is one performance entry I'm likely to attempt at my next show. Here's a reference picture for Estudioso... 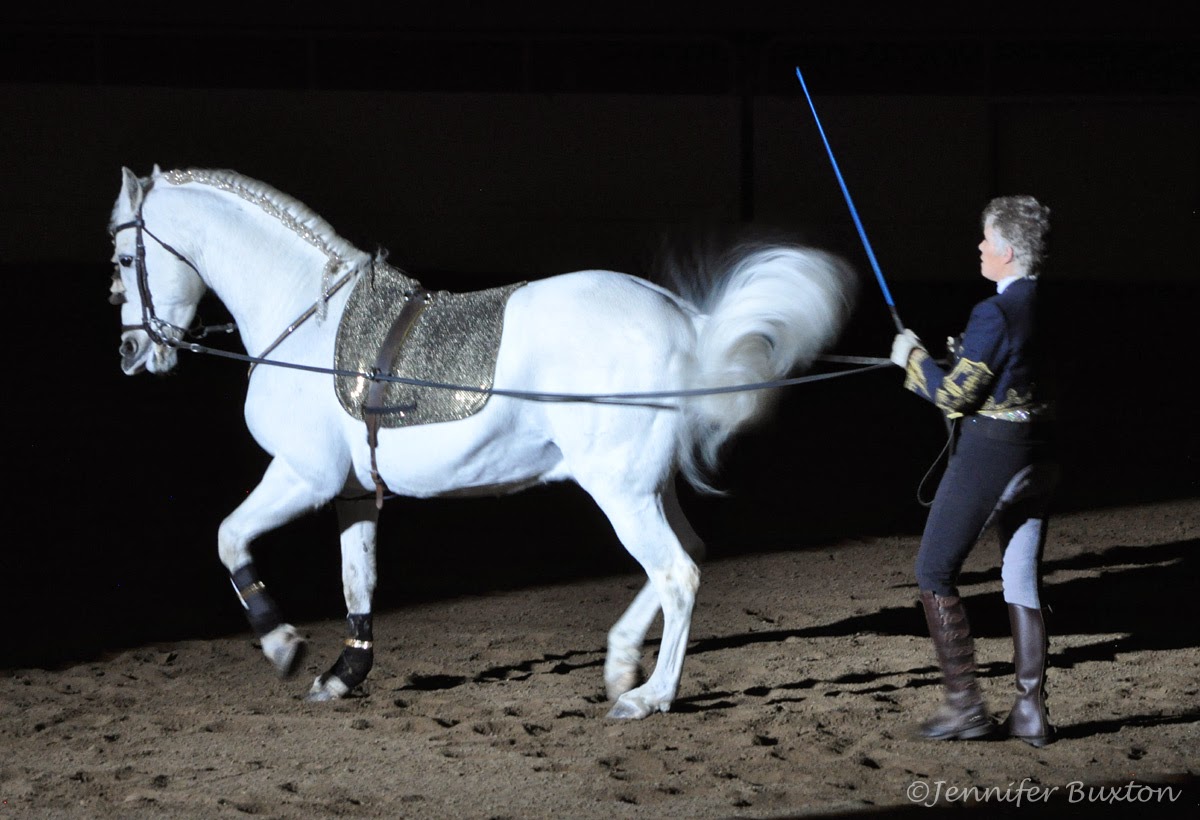 and one for Castillo. 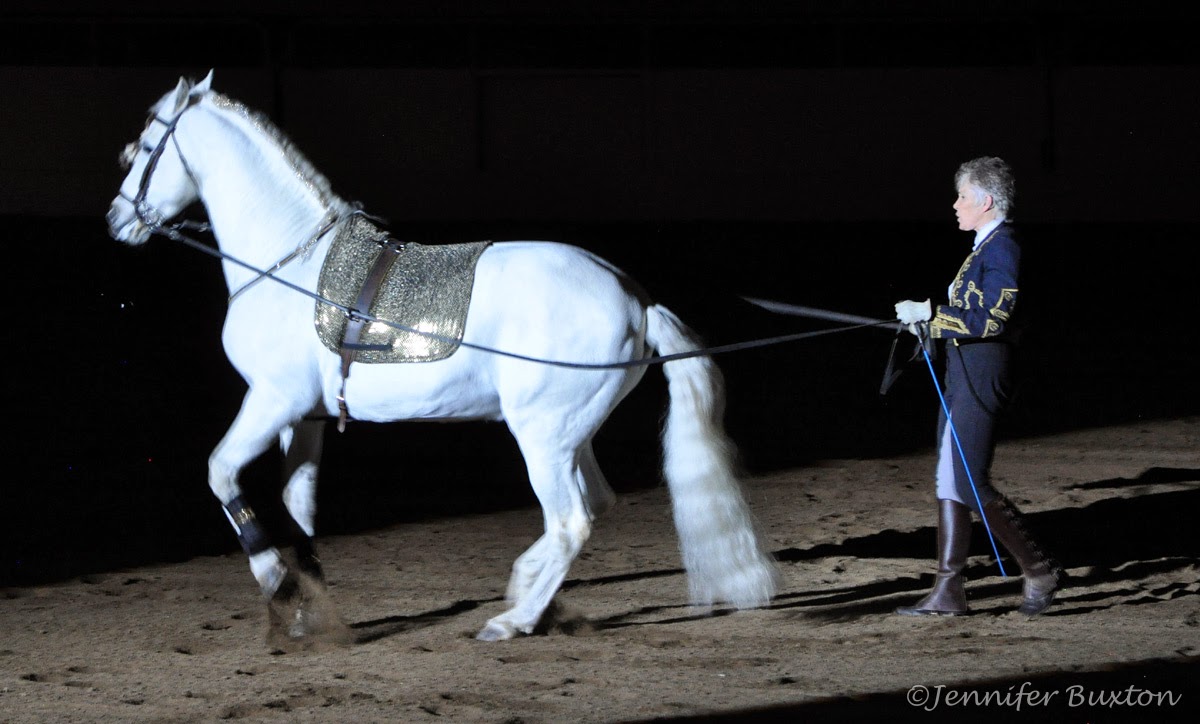 The trotting Arabian costume horses were next, but that's going to wait until tomorrow!
Posted by Braymere at 8:51 PM