Friday Favorites belong on Fridays, and today is...  not Friday.
In my defense, I have a really good reason for breaking my own blog rules.  This particular Favorite is at auction right now on eBay.  Bidding closes Wednesday, and I want to showcase this piece while it's still available.  By the time Friday rolls around, it will already be on its way to the lucky new owner!
That said, it's time to move on to the good stuff.  This amazing coal mining scene was made by the British artist, Jan Rusling. 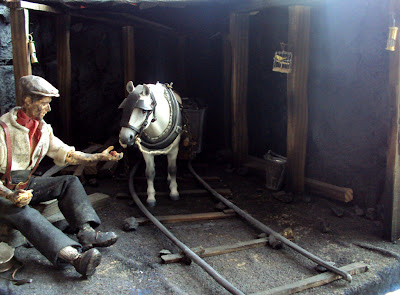 Here's how she describes the scene:  A Miner has taken a break down the pit and sat down on the spare pit props, wiped his hands on a rag, opened his lunch tin and tucked into an apple. The pony, anticipating a tidbit has inched forward and leaned towards his co-worker. The man has, meanwhile after finishing the apple, taken up a cheese sandwich, taken a bite and now holds the anticipated apple core out to the pony. 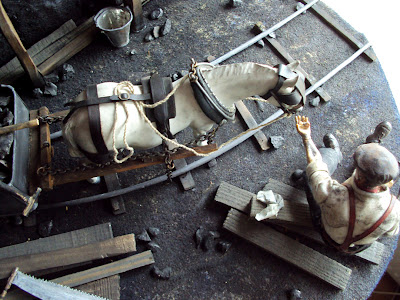 Jan created this set in 2009 and has shown it four times resulting in a Supreme Championship, a Best in Show, a Reserve Championship and a Reserve to the Reserve honors. 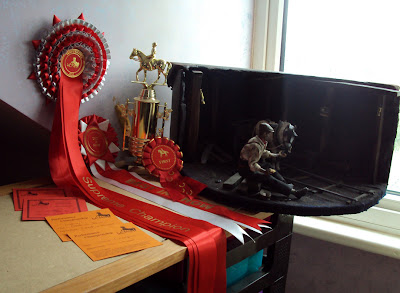 The pony was originally a Breyer classic mustang stallion. His coat is marked and smutty from long days toiling in the mine.  The pony's tack was custom made using historic photographs as reference. The collar comes away in three pieces so it can easily removed.  The rest of the harness and bridle has three working buckles and is also removeable.  Because of the design of the tail, the crupper is not a complete ring and  kept in place by tacky wax. 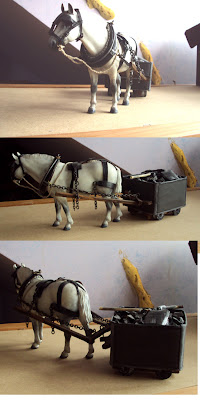 The coal cart is handmade and features proper train type wheels.  The cart rails are made of metal and have a slight metallic sheen.  There are small brass lamps on the floor and hooks on the upright props to hang the brass lamps and the canary. 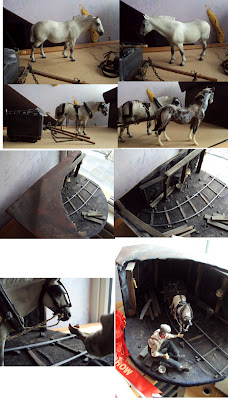 This scene depicts an earlier period of mining when there were no hard hats or safety lamps. The only 'safety' equipment was the canary in the cage which served as a gas detector.  Miners provided their own tools, including the timber for props which were cut 'in situ'.

Like the cart and pony, the tools, canary and bird cage were hand made by Jan. 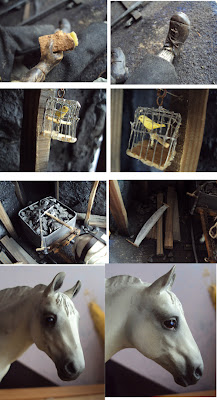 The miner has fully articulated hands with which he can easily grasp objects  and is fully pose-able. The cheese sandwich, apple core and lamps were all been individually handmade, not shop bought.  tail but is kept in place by tacky wax. 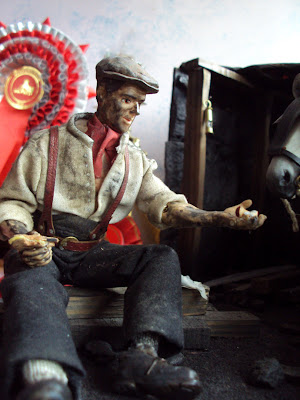 Many thanks to Jan for allowing me to share these photos of her amazing scene.  If you are interested in seeing more of Jan's work, I would highly recommend visiting her website.  It's not model horse related, but trust me, you will be impressed!
Posted by Braymere at 3:28 PM