Teresa and I went to the National Western Stock Show yesterday. 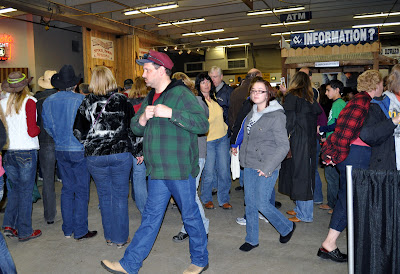 I'm not kidding.  In all the years I've been going to the Stock Show, I have never seen crowds like this. 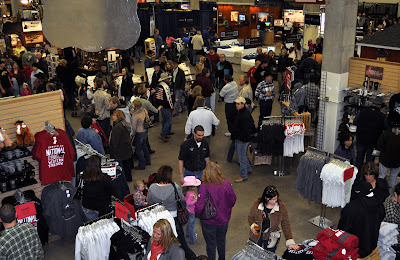 Those crowds made it hard to navigate the trade show, but there's good stuff for sale there so Teresa and I persisted. 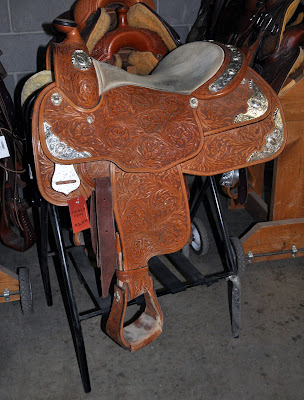 There was also a lot of pink stuff--pink hats, 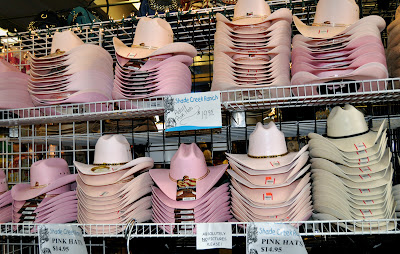 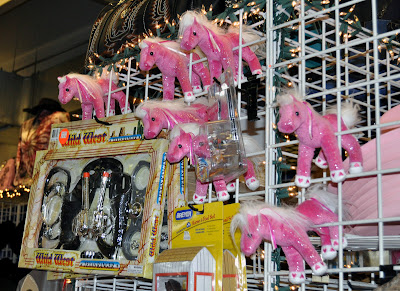 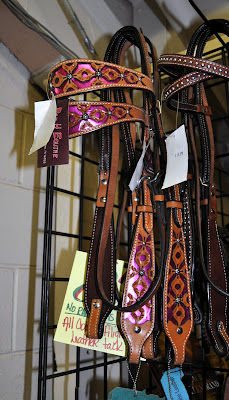 Close up of the browband.  'Fess up people, I know you want to own this!

I'm not so sure about this one.  I think that silver studs, pink hair and zebra print all on one bridle just might be overkill. 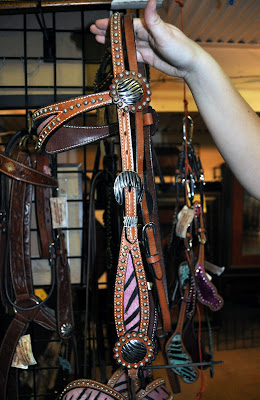 One thing we did not see a lot of were Breyer horses.  There were a few here and there, but none that interested me as much as these little Breyer knock-offs. 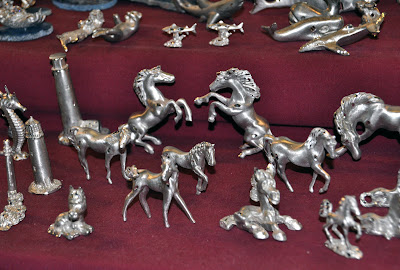 One of my favorite exhibits was the Toyota Coloring Station. 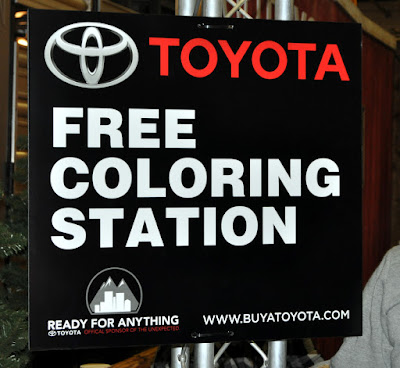 Who hasn't wanted to draw on a car with a Sharpie maker? 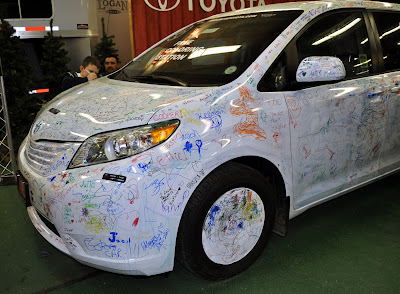 This is what I drew: 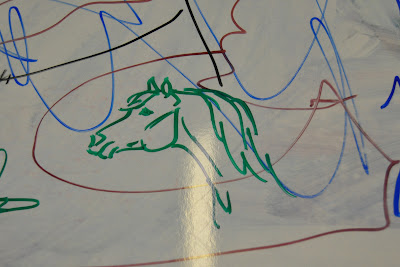 Eventually we wandered upstairs to see the pony ride ponies. 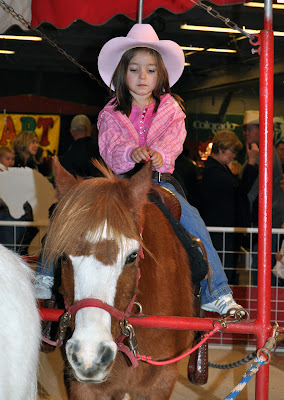 After that, we headed over to the Stadium Arena and watched a little bit of the cow show. 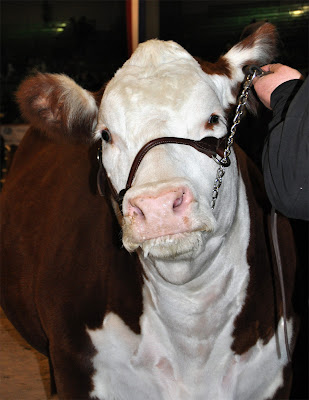 Even that was crowded. 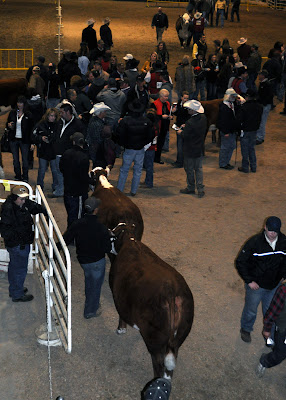 Finally, we walked across the parking lot to see the horses and guess what?  The stables were crowded, too. 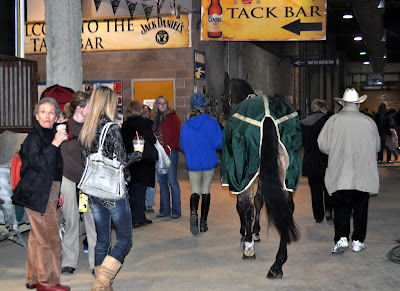 We were too cheap to buy tickets for the Wild West Show, so we hung out at the warm up ring and watched the performers there. 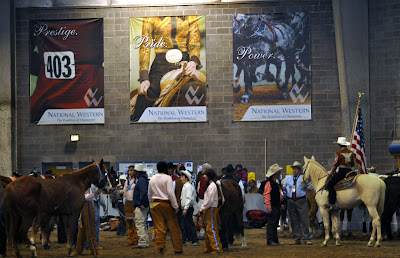 Honestly, I don't think we missed much. 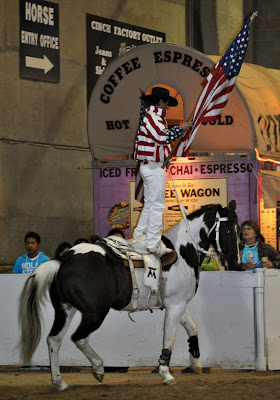 The warm up ring was pretty exciting... 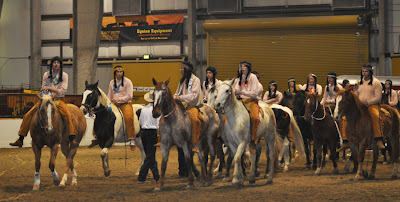 and as an added bonus, we got a good close up look at both the performers... 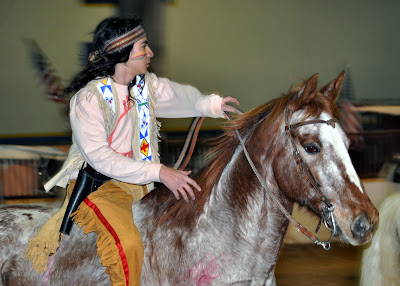 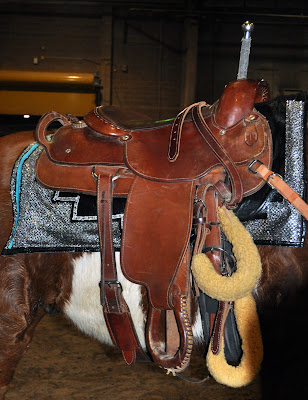 We ended our day by watching the $5,000 Open Jumper Stakes which was held in the Events Center arena.  Historically I've had a hard time getting good pictures in this building, so I was interested to see how I'd do with the new camera.  The results were pretty hit or miss.  Some pictures turned out ok... 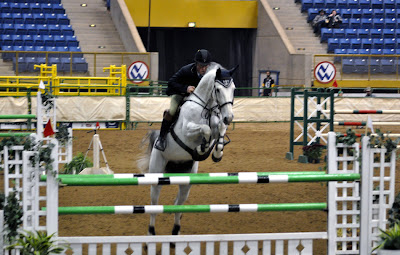 but a lot of them looked like this.  Frustrating! 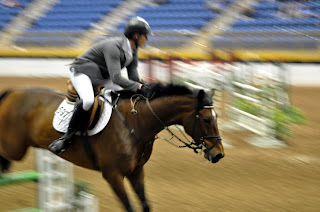 I had only planned on going to the Stock Show once this year.  However, after looking at the day's pictures, I think I've figured out what I was doing wrong.  In the interests of testing my theory, I really ought to make a return trip...  Hmmmm, which day has the mule performance classes?
Posted by Braymere at 1:55 PM