It's hard to believe but it's been almost two years since I made a saddleseat saddle.  Even more surprising--the most recent saddleseat pattern I had was dated 2008!  I've greatly improved my saddle making techniques since then, so the first step in making Erin's saddle involved revamping several pattern pieces. 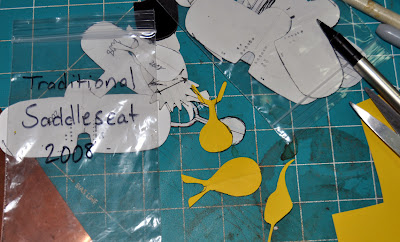 Somewhere along the way, I decided I should make two saddleseat saddles rather than just one.  As is usually the case, these saddles appear more "finished" in pictures than they do in real life.  Still, it's fair to say that this has been a very productive day in my studio. 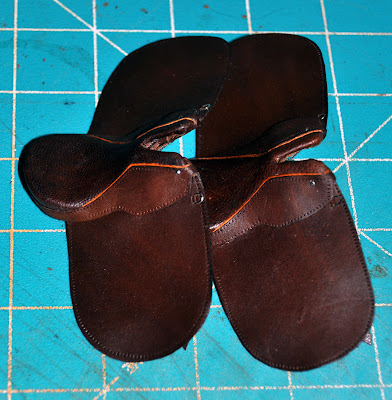 Also worth mentioning--only one of these saddles is spoken for.  The other is up for grabs.  Email me at braymere@comcast.net if you are interested.  The price for the saddle and girth is $200 and the buyer may also choose to order a matching bridle.  Preference goes to buyers who can pay in full, but time payments can arranged.
Posted by Braymere at 5:52 PM