So what kind of tack is common? Well, you’ve already seen several bridle selections from Jennifer’s earlier posts. You can see that they run the gamut of plain snaffle, plain noseband to no noseband at all (I wouldn’t recommend this… and you can see the guy was obviously being run away with…), to hackamore combos, and all sorts of other weird things. You have to have brakes! You also have to be able to steer, which is sometimes dodgy with some of the bridle contraptions you’ll see, but just know that if you’re replicating this in model scale, pretty much anything goes. 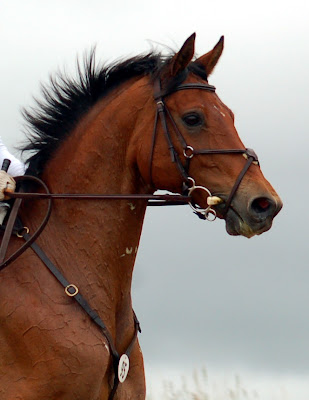 Saddles for cross-country are pretty standard. 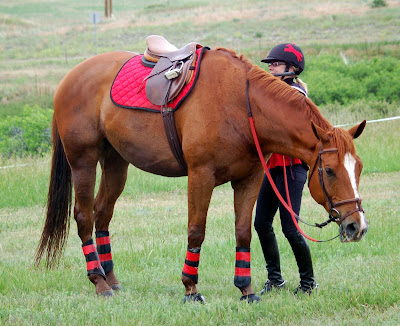 You may use any jumping saddle, though it’s very typical for a cross-country saddle to have a pretty deep seat and at least knee rolls, if not knee rolls and thigh blocks. You have to be secure in your saddle. 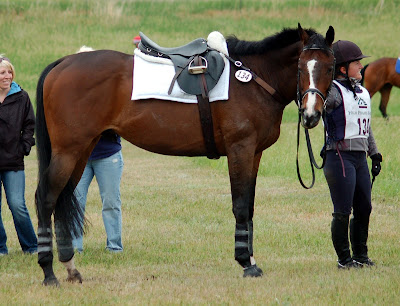 A newish trend is long billets and short girths. This has been an off and on occurrence for many years, but with the advent of Devoucoux saddles from France, which come standard with long billets, this has become much more common. Also, it eliminates the bulk of the buckles from beneath the rider’s leg, the same with dressage saddles, and allows for a closer feel of the horse. 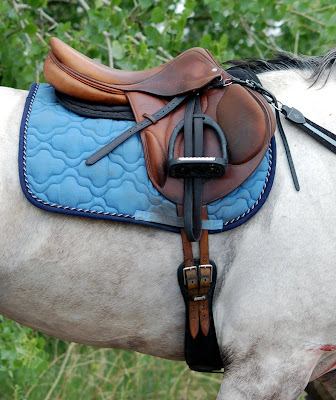 Devoucoux saddles can be ordered in basically any custom color combination, as well as several different styles of blocks and leather 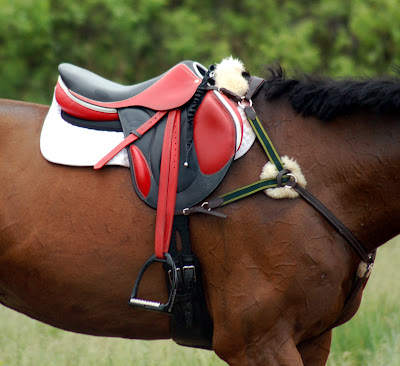 Breastplates of any style are quite commonplace, but what you’ll see at the upper levels almost exclusively are the 5 point attachment breast collars originally made by Devoucoux, but now from several different makers. These are the “odd shaped” breastcollars you’ll also see on some show jumpers. 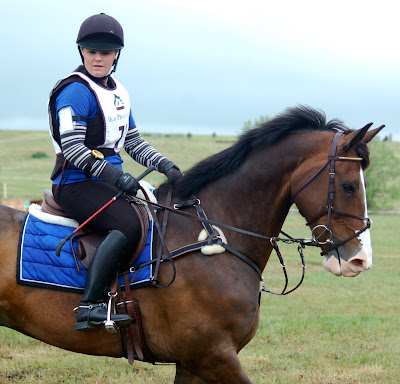 Instead of attaching to the saddle dees or stirrup bars, going around the chest and between the front legs, these breastcollars attach at the stirrup bar (much more secure, though in a model setup, I would hesitate to try it…) and the girth on each side, as well as running through the front legs and attaching to the girth there as well. You’ll often see these padded with sheepskin on any leather areas to keep from rubbing at high speeds. 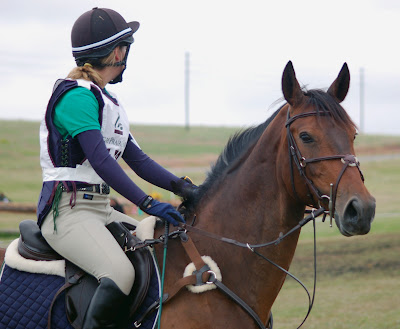 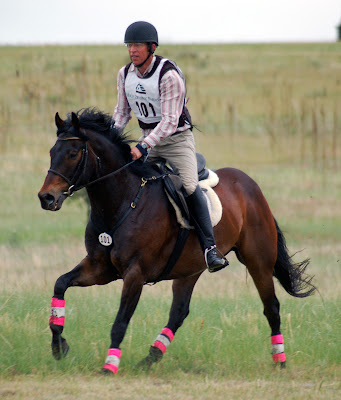 Somewhat less common are the jumper breastgirth (all elastic, attached only at the saddle d’s or the stirrup bar)... 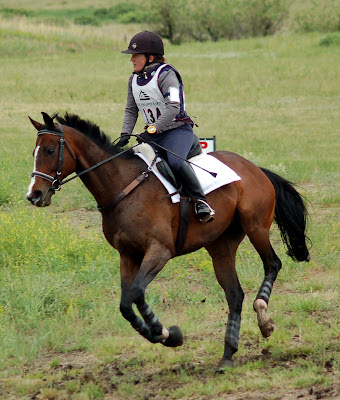 or the conventional breastgirth, which is a wide-ish leather or elastic band that attaches to the girth under the saddle and has a hanger strap over the withers. These are often covered with sheepskin as well, as they tend to rub when adjusted tightly enough to keep the saddle in place. In addition, most, if not all cross-country horses run wearing a running martingale... 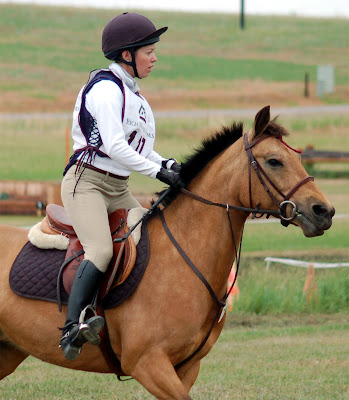 or a running martingale attachment that buckles to the center ring of the breastplate These can be adjusted very tightly (I’ve seen them so tight they put a V in the reins) or quite loosely, and as long as they aren’t dangerous, it doesn’t hurt anything to put one on your entry. Remember, no standing martingales on cross –country, ever. 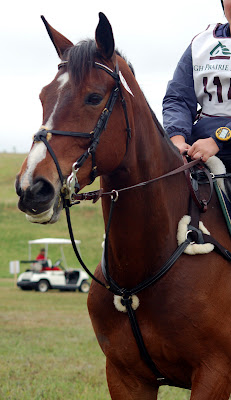 Oh! One note on breastcollars, both the 5 point attachment variety and the breastgirth variety: for safety, always run the loop to the BACK BILLET of the girth, buckle that billet, then buckle the front billet OVER the loop of the breastcollar. This not only keeps the breastcollar from slipping down too far, it also means you won’t lose your breastcollar if your front girth buckle breaks, possibly causing a terrible wreck. This is also why you buckle the loops of a conventional breastplate through the stirrup bars, rather than the dees of the saddle. If buckled through the dees, and the screw that holds the dee into the tree breaks, you’re in an unsafe situation, but if buckled through the stirrup bar, there’s much much less chance of breakage. They also make elasticized dees you can slide over your stirrup bar and attach your breastplate straps to.

Whew! Still with me?? We’re almost done, I promise!!