Today is the one hundred and forty second running of the Belmont Stakes. It doesn't promise to be a particularly exciting race. There is no clear favorite, no suspected super horse. The Triple Crown is not on the line. In fact, neither the Kentucky Derby winner nor the Preakness winner will be in attendance.

Still, I've planned my day around the race. Good year or not, I always watch the Belmont Stakes. It's been my favorite race since 1978.

In 1978 I was a typical horse crazy nine year old in that my entire knowledge of horse racing was based on the Black Stallion books. That all changed, however, when I came across a copy of this book. 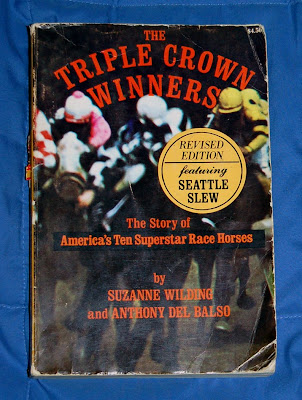 Oh, I must have read that book a hundred times! Suddenly I was a huge racing fan. I started counting the days until the first Saturday in May. It was all so exciting and I wanted to be a part of it.

Finally the big day came. I watched the Kentucky Derby at my friend Amy's house. After a lot of deliberation, we decided to root for Affirmed. It turned out to be a good decision. Affirmed won the race handily.

Two weeks later he won the Preakness, and I was officially in love. There was no doubt in my mind that Affirmed was the best and most perfect horse in the entire world. I could recite his pedigree and his pictures decorated my bedroom wall. I knew he was going to win the Triple Crown. I just knew it.

However, as Belmont Day approached, a scheduling conflict emerged. My Girl Scout troop was going to the beach that day, and my attendance was taken for granted. I surprised everyone by asking to stay home and watch the race instead. My parents were incredulous, but together with my troop leader, they negotiated a compromise that would make everyone happy. I would go to the beach, but I would be allowed to listen to the call of the race on my troop leader's car radio.

So there we were, Mrs. Bell and I, listening to the radio in her hot car as everyone else played in the ocean. I was a shy child and was acutely aware that Mrs. Bell had no interest in the race. It was physically and emotionally painful waiting with her inside that car, but I just couldn't miss the Belmont. At that moment, it was the most important thing in my world.

And then at last, the starting gate opened and the 1978 Belmont Stakes was underway! Affirmed went right to the front, but his rival Alydar was never far behind. Alydar challenged Affirmed for the lead midway through the backstretch, and the two matched strides for the remainder of the race. I literally thought I was going to die when Alydar got his head in front for a few strides, but then beautiful, wonderful, perfect Affirmed came back and won the race and the Triple Crown.

It would be several decades before I actually saw the race in it's entirety. Now, thanks to You Tube, I can watch it whenever I want.


The picture isn't very good, but that doesn't bother me. As far as I am concerned, this is a race to be listened to. Even now, some thirty two years later, I can turn it on, close my eyes and be nine years old all over again. I can feel the car seats and smell the ocean air as I listen to Affirmed race his way into the history books...

The Belmont Stakes is my favorite horse race. Always has been, always will be and I am looking forward to today's edition.